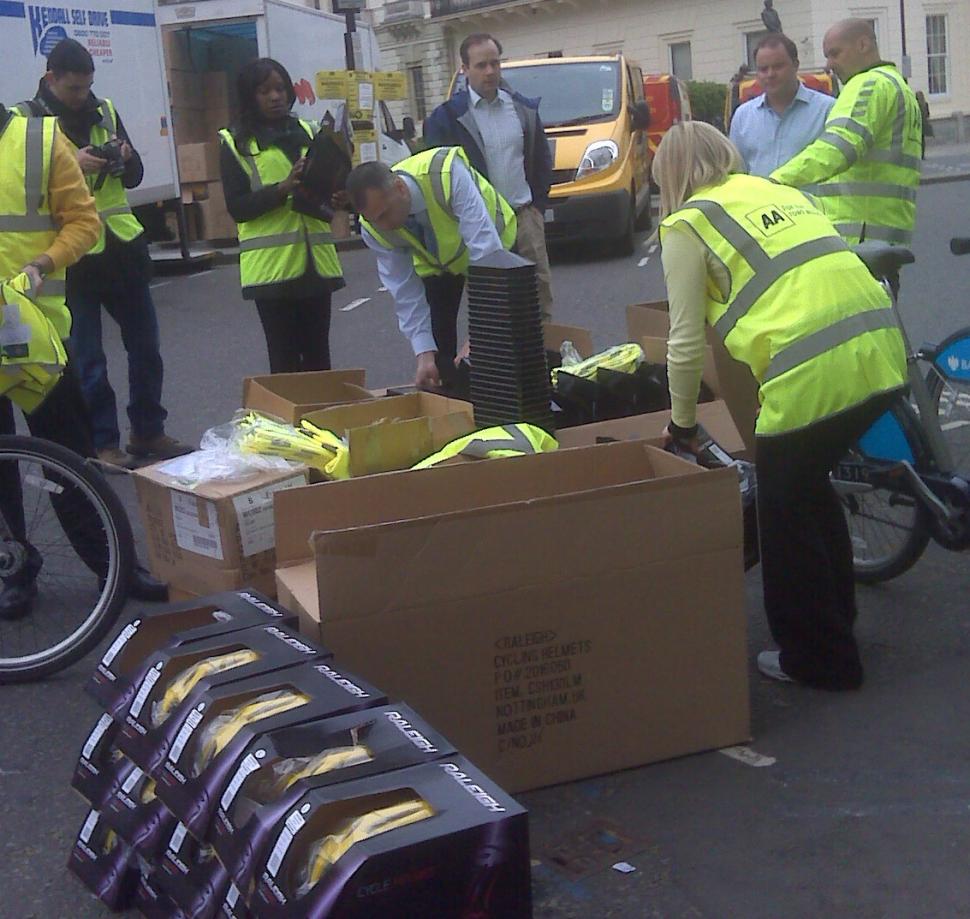 AA to hand out 5,000 free cycle helmets in London today

CTC to hand out copies of the highway code to balance "one-sided" campaign...
by dave atkinson

The AA are taking to the streets of London today and handing out free helmets and hi-viz vests to cyclists, a move which has raised the ire of the cycling community and led to the CTC to hand out copies of the Highway Code at the same spot. Whilst current AA prsident Edmund King is a keen cyclist and the AA is guardedly pro-cycling as a rule, many cyclists have questioned why a motoring organisation feels the need to place the responsibility on cyclists to protect themselves: especially when helmets aren't designed to protect against collisions with cars.

The AA have 5,000 Raleigh Missile helmets, RRP £27.99, to give away. They're fairly standard fare, with the addition of an integrated LED in the rear adjustment dial. King himself will be in attendance to help with the distibution, which is taking place today at Waterloo Place, London SW1Y 4BN this morning and the west side of Lincoln’s Inn Fields, London, WC2A 3NA from 1pm. Other locations may also be used, you can follow Edmund King on twitter for updates.

According to a recent poll commissioned by the AA, 97% of their members believe that cyclists should wear helmets, although only 18% of those members actually cycle themselves. The helmet giveaway is aimed primarily at the users of Boris Bikes, although any cyclist can claim one. “We welcome the increase in cycling brought about by the cycle hire scheme but we want to ensure that more cyclists don’t lead to more casualties. The use of cycle helmets and vests by all cyclists could significantly reduce the number and severity of injuries that occur each year", said King.

What he didn't say, which has angered many cycling advocates, is that the burden of responsibility lies not just with cyclists. Indeed the accident statistics show that cyclists are not to blame for the vast majority of collisions, with the police attributing blame to the driver in up to three quarters of collisions between a bicycle and other vehicle in accidents involving adult bike riders.

Mikael Colville-Andersen of Copenhagenize.com is quoted on Bikehub as saying, “While it’s great that the AA president is also a cyclist, this is merely another case of placing the responsibility on the vulnerable traffic users instead of tackling the rampant bull in our society – the automobile. It also sends dangerous signals that bicycle helmets are effective in collisions with cars, which they’re not. They’re not even designed for that kind of impact. "

The AA's stance has particularly angered the CTC, which will also be at the handout spots distributing copies of the Highway Code to motorists to balance what it describes as a "disturbingly one sided" safety campaign. The CTC issued a press release last night which stated, "any organisation that focuses exclusively on vulnerable road users in this way, even for publicity purposes, risks misrepresenting the sources of road danger. CTC believes that far bigger road safety gains can be made by tackling instances of bad driving".

There was much to-ing and fro-ing on twitter last night but King was bullish, although to his detriment he did rely on likening helmets to much more proven safety devices ("I have a helmet, I have an air bag but it doesnt mean I think everyone wants to crash into me") and anecdotes ("Gaby Roslin says helmet saved her partner David's life. James Cracknell agrees") rather than explaining how the helmets were going to make a meaningful impact on cyclist safety in London, where the majority of cycling deaths are down to collisions with heavy goods vehicles.

Still, if you want a free helmet or a hi-viz vest, or both, today's your day. Assuming you're in London. The AA have said they'll be repeating the giveaway in other UK cities later in the year.

1
Cyclist arrested after police force rider off M3 motorway
2
Top American gravel racer shot dead in Texas
3
"Ludicrous": Disappointed RideLondon cyclists learn safety car will set 22mph pace limit
4
Zipp says using a Wahoo Kickr Rollr will void your wheel warranty
5
Near Miss of the Day 767: MGIF driver cuts across cyclist at speed on roundabout
6
“Maybe the easiest race I’ve ever done”: Pros enjoy relaxing Giro d’Italia stage six… but could you have kept up?
7
Near Miss of the Day 768: Driver squeezes between two cyclists – but only receives warning letter as rider didn’t “swerve”
8
What happens if you put a giant propeller on a bike? Plus new stuff from Rapha, Campagnolo, Ritchey, Selle Italia, Lezyne + more