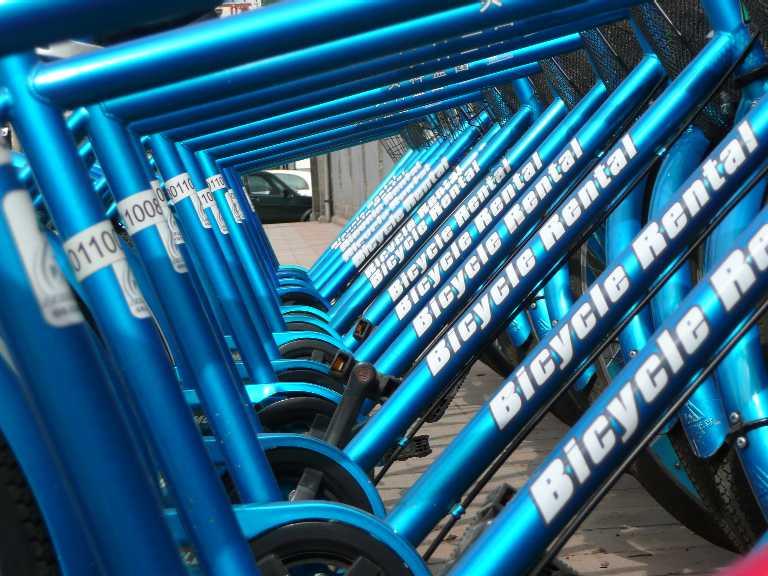 There are nine million bicycles in Beijing...and 350 more in Shanghai

Chinese commuters flock to use "free bikes" ...
by Rebecca McIlhone

As debate rages over the London bike-hire scheme and similar schemes, like the Paris Velib, already implemented around Europe, bosses in China have got the right idea by making theirs completely free.

Well almost…whereas most European systems allow a set amount of time (usually half an hour) free and then charge on an increasing scale thereafter, a system just installed in Shanghai, offers bikes to city residents free for up to four hours.

While Transport for London says its yet-to-be-finalised pricing system will encourage quick turnaround of the bikes, intended for short journeys across London, residents of the Minghang District in Shanghai, will be able to enjoy pottering around at a more leisurely pace.

The 350 bikes are now available at Metro Line 1 and the scheme seems popular. One hundred residents have already been sent registration cards while another 800 have applied for theirs.

According to the article in the Shanghai Daily public bike services first appeared in China last August during the Beijing Olympics to help visitors travel from hotels to stadiums.

Any resident aged 16 to 65 can apply for a registration card with no deposit but must provide identification with other details like a social security card.

It’s understandable why this scheme is being made so accessible with the threats to the environment from China’s growing car market, which the consultancy McKinsey estimates will grow tenfold between 2005 and 2030, according to an article in The Guardian.

That will mean a sharp rise in carbon emissions from a country that has already overtaken the US as the world's biggest source of greenhouse gases.

But there's surely some hope in the fact that, as reported in road.cc, the Chinese are also the biggest fans of electric bikes and are about to launch their first mass-produced fully electric car, the E6, which will soon be released onto the world market.