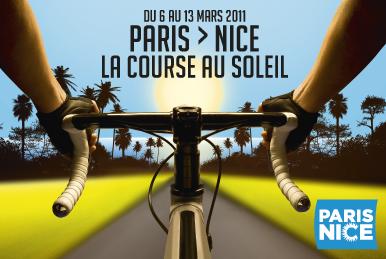 French national champion Thomas Voeckler launched a decisive attack on the Col d’Eze to win the final stage of this year’s Paris-Nice from Lampre’s Diego Ulissi. It was the Europcar rider’s second stage victory this week. Despite the efforts of Euskaltel-Euskadi’s Samuel Sanchez, the top three in the general classification remained unchanged, with HTC-Highroad’s Tony Martin claiming the overall win, RadioShack’s Andreas Kloden and Team Sky’s Bradley Wiggins completing the podium.

Voeckler had got into an early 11-man break in which the highest placed rider overall was Matteo Carrara of Vacansoleil-DCM, who began the day 2 minutes 50 seconds off the lead.

The Frenchman attacked at the foot of the day’s final climb, the Col d’Eze, and pulled away from Ulissi on the subsequent descent to claim the win in style on the Promenade des Anglais.

All of the riders who occupied the top ten places in the general classification this morning were in the chasing group, with RadioShack and Team Sky prominent as they sought to protect the podium positions of, respectively, Kloden and Wiggins, and perhaps seek to attack Martin.

With a route comprising five categorised climbs, including the Category 1 ascents of La Turbie and the Col d’Eze inside the closing 40km, the sceene was set for someone to launch an attack late on to try and wrest the yellow jersey off Martin’s shoulders.

When the attack came, it was from Olympic champion Sanchez, who had started the stage in sixth place. Jumping off the front of the group on the climb of the Col d’Eze, the Spaniard might have been expected to use his formidable descending skills to eat into Martin’s advantage over him of 1 minute 29 seconds.

However, perhaps nervous as a result of treacherous roads made slippery by the incessant rain, Sanchez, accompanied by team mate Gorka Izagirre Inasausti, who had dropped back from the remaining escapees, only gained 16 seconds.

That was enough to raise him just one place to fifth in the overall standings, but insufficient to threaten the podium placings.

Paris-Nice may be billed as the Race to the Sun, but it failed to live up to that nickname again today when, as yesterday, atrocious weather descended over Provence.

Yesterday’s crash-strewn Stage 7 had seen no fewer than 19 riders abandoned the race, including big names such as Frank Schleck, Sandy Casar, Nico Roche and Frank Schleck. A further five riders did not start this morning.

The most serious accident yesterday befell Garmin-Cervelo’s Martijn Maaskant, who fractured seven ribs. That will keep the specialist out of the impending classics season, and many riders were noticeably cautious today as they sought to avoid a similar fate.