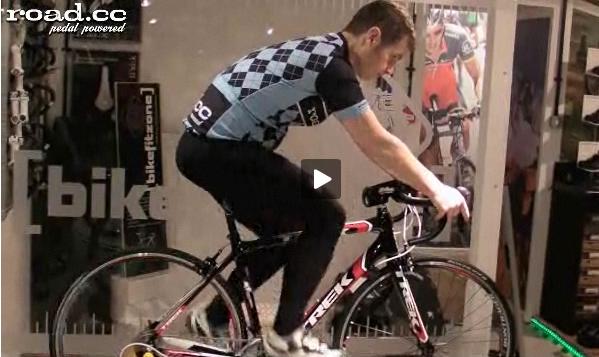 Video - Getting a Trek bike fit

Tony gets the Trek Fit treatment as he prepares to test a Madone 3.1
by Tony Farrelly

Bike fits eh? You wait a cycling lifetime for one and then two come along at once, well, a few months apart. Last time out I got fitted for a Santos touring bike this time I'm trying out the Trek Fit programme which not only fitted me to one of their Madone 3.1s but also to my own Cotic Roadrat - in fact that was the starting point as you'll see in the video below.

Trek's bike fitting approach is all about getting a balance between your left and right hand sides on the bike and above all fitting the bike to you rather than you to the bike, hence the different H1 and H2 geometries and H3 geometries on offer throughout the Madone range right up to and including the top of the range 6.9SSL. H1 is the lowest at the front. Purely for the cat 1s and racers. H2 is 3cm higher at front (same geometry) as H1 while H3 is about 1.5 cm higher and shorter again but with the same angles. Trek's WSD models come with H3 but really Trek say it's down to fit rather than gender.

Flexibility is very much at the core of Trek's Fit program (to give it it's proper name) which feeds in to making sure that the fit works for the type of riding you do and the type of riding you might aspire to do doing "it's a dynamic process" explained, Jez Loftus one of Trek's Bike Fit trainers and the man who did my fitting down at Live2Ride in Frome, so what they tell you isn't set in stone for all time. It may be that your flexibility increases and then you can lower things a bit and still be comfortable, or you may decide you want to put a greater emphasis on comfort in which case you can come up a bit. What the Bike Fit should do is give you a balanced starting point that puts you in the best position for the way you ride your bike now and to help you to understand how the various aspects of saddle to bar distance etc relate to each other so that you can then evolve things as necessary if or when your riding style changes.

The first part of the process wasn't on the bike at all, it involved Jez asking me a set of fairly in-depth questions about my riding habits – miles per week/miles per year, and style – cadence, usual riding speed, aches, pains, long standing injuries and any health problems I might have. So before I'd even got on the bike he'd established that I often suffer from hotspots, get an ache between my shoulder blades which I put down to my bars being "slightly" too wide, and that I'm sometimes troubled with by soreness in my left achilles tendon.

Next he assessed my flexibility paying particular attention to measuring the flexibility of my hamstrings, and my hip flexion. Trek's system divides rider flexibility in to one of three bands: red, yellow or green - with green being the most flexible. Much to my surprise I turned out to be mainly in the green when it came to isolated hamstring stretches, with my hamstring range being at the top of the yellow range and a yellow left hip and a green right hip on the flexion test - the latter turned out to be a significant pointer of things to come.

Jez also measured my shoulders and inseam and assessed my standing posture (right shoulder slighly dropped apparently), this combined with the earlier measurements and my flexibility test lead him to suggest that I might have some right/left issues possibilty caused by a discrepancy in the lengthy of my legs although he said that only way to definitively find out if one leg was shorter than the other was to have an MRI scan because there were so many other factors that could cause one leg to appear to be shorter than the other. It's a pretty common issue.

After a good half an hour of measurements and questions I got on to my bike hooked up to a turbo trainer so Jez could look at my current riding position and bike set up – he'd already taken a stack of measurements from the bike: saddle height; saddle setback; seat tip to bar; seat tip to lever; stem length; stem angle; handlebar width; and and handlebar drop; one that he was particularly interested in was the 'drop' measurement the difference between the measurement for the top of my bike's saddle to the ground and the top of the bars to the ground.

There then followed a lengthy session of me spinning on the turbo with Jez observing my position and the way I was moving, while also taking measurements of my knee angle at the top and bottom of my pedal stroke. The upshot was that there did seem to be a discrepancy of movement between my left and right sides – Jez detected a slight flicking out of my left leg at the top of my pedal stroke as it reached the limits of my hip flexion, something I've been aware of but only when I'm started to get a bit ragged at the end of a long ride. The next step was to adjust my position on the bike to achieve a better balance between my left and right sides, and to help me get a straighter back and to engage my core muscles more, Jez had also noticed that my hips were rocking slightly - a set of 170mm cranks to replace the 175s on my bike was the prescribed cure oh, and no surprise either that I needed to ditch my current 44cm bars in favour of some 38cm ones - just doing that according to Jez would massively improve my comfort and performance on the bike.

Next it was on to an H2 Madone 3.1 which Jez set up to using the measurements he had taken earlier and those he'd taken on my bike too, there was talk of shimming my left cleat but he decided against in case it threw me out on the right side, more on bike measurements were taken (the video will give you a much clearer idea of the process) and tweaks were made. Even so a lot of work went in to getting my feet in the right position over the pedal spindle.. My original saddle height it turned out was spot-on fro the way I ride, but Jez advised me to get a bigger size shoe and something offering more cleat adjustment. I'm going to do that and see if it makes using road pedals any more comfortable - these days I tend to wear MTB shoes combined with Shimano M324 pedals which have a nice wide pedal body. In three months I'm back for Jez to see how I'm getting on and I'm going to bring those pedals too.

The proof of the pudding will be how I get on with the Madone 3.1 which I'll be testing over the coming weeks, initial impressions though are favourable, the shorter cranks combined with everything else eliminated those rocking hips instantly and Jez encouraged me to try rolling my hips forward to help me engage my core muscles when pedalling, that too has had a noticeable effect in terms of power delivery for the same amount of effort. As for the bars? Well I knew the ones I had fitted to my Roadrat were wider than I wanted but I didn't no just how wide of the mark they were - narrower ones are going asap and I'm going to look for a set of shorter cranks too.

How do the Trek and Santos approaches compare? Well, it's not a completely straightforward comparison as they were for two different types of bike - one more concerned with performance and the other comfort both were very thorough and both identified some similar problems, my habit of locking my arms out for instance. Interestingly I was more flexible at the Trek fit – I'd put that down to getting fitter as a result of the Santos fit, but that extra flexibility threw up some left/right leg issues that weren't apparent for the Santos fit. Both were about fitting the bike to me rather than me to the bike and I certainly learnt a lot from both. For even more on bike fitting check out Mat's feature on his Viner Bike Fit.

Trek have trained around 100 of their top dealers to offer the Trek Fit service, it can be as part of the process of buying a Trek, but it doesn't necessarily have to be. Our Bike Fit lasted a good hour and a half, that's about par for the course - they can be longer though if you have specific needs. You can expect to pay between £100 to £120 for the fitting and that will often include a follow up session a few months down the line to see how you are getting on. You can find your nearest Trek Fit store using Trek's dealer locator - click through to the extra information on a particular store and it should list the Trek Fit service if the store offers it.