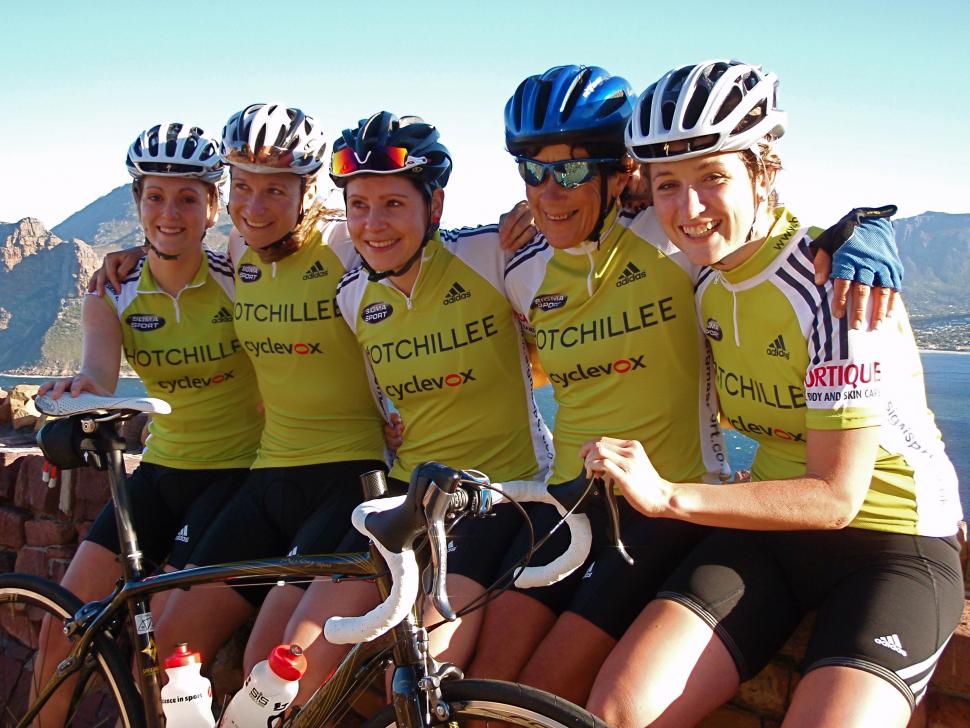 Heat is off for HotChillee women's race team

The team, made up of amateur and professional cyclists, survived scorching temperatures and a howling gale to achieve a 9th and 10th place in the race dubbed “The Tour of Storms” by its organisers.

This is the first time HotChillee, which organises the London-Paris Cycle Tour, has formed its own cycling teams and the women’s team winners were Tanja Slater and Nikki Harris, finishing 9th and 10th respectively. Meanwhile Penny Krohn achieved her 25th consecutive win in her age category.

In the men’s event, HotChillee’s Jerone Walters finished 2nd in the men’s invitational group. All the teams were battling through sweltering 40C conditions and blasting winds, but the HotChillees certainly rose to the challenge.

Team member Nikki Harris, from Derbyshire, who rode in the Commonwealth Games in Melbourne, said: “It was a fantastic experience and an amazing week spent with a real variety of people. The whole HotChillee team did their very best and it was great that Tanja and I managed to get good results.”

Tanja Slater, a former GB cyclist and international tri-athlete said: “The camaraderie in the HotChillee Challenge Team was brilliant and the cycle tour was rather interesting due to the very strong winds but it was a lot of fun to be racing again and I was pleased with my performance.”

Team owner and HotChillee chief executive, Sven Thiele, said: “I am so proud of my team. They did a fantastic job and I hope we’ll be back next year.”

While in Cape Town, the HotChillee Challenge Team presented a cheque for £17,800 to the Christel House charity, which works to empower children through education.

Tanja Slater said: “To top off an amazing week we visited a newly built school for underprivileged kids, Christel House, and were given a song and dance reception by the young kids. We presented them with a donation from London-Paris 08 and I would like to thank the sponsors for making this trip possible.”

The money was raised by last year’s London-Paris Cycle Tour, described by its organisers as a unique “Tour de France” style endurance event, the "professional event for amateurs".

HotChillee was founded by London-based South African-born technology entrepreneur Sven Thiele and the London-Paris Cycle Tour includes many competitors from the City as well as high profile sportsmen and women from a range of disciplines.

For more information on this event, visit: www.londres-paris.com