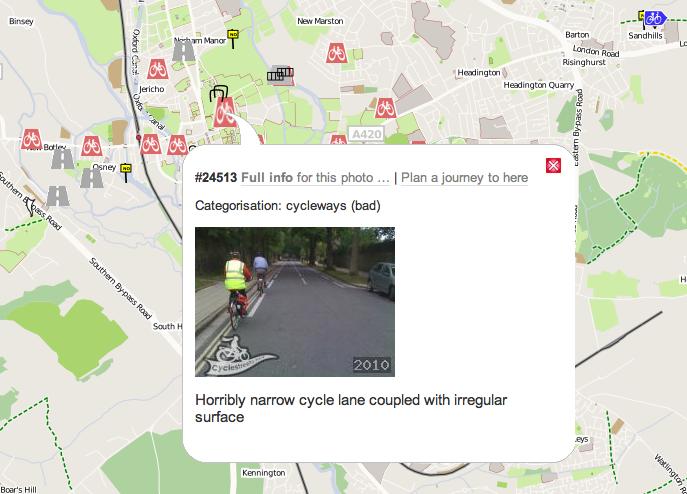 Picture-a-day photo projects are nothing new – the Flickr 365 Days self-portrait pool has nearly 20,000 members for starters – but cycling mapping website CycleStreets is bringing a new twist on it with a bicycle-related photo being featured each day on its website.

By following CycleStreets on Twitter, you’ll be alerted to what they consider the best picture taken on that day in previous years, drawn from more than 25,000 photos now featured on the CycleStreets Photomap.

According to CycleStreets, the Photomap not only showcases “a range of quirky, interesting and unusual pictures,” but also “masses of pictures of good and bad infrastructure that campaigning groups around the country will find useful. Groups like Cambridge Cycling Campaign have often found the resource immensely useful, as it has enabled examples of best practice to be shared, and evidence of problems to be published so that they can be drawn to the attention of the authorities.”

Martin Lucas-Smith, co-developer of CycleStreets, says: "We hope to surprise people daily with a range of interesting, useful and sometimes downright quirky images. Tune in to our Twitter channel to discover something new each day. And if you're quick, photos added on the day may get picked as the best one."

CycleStreets adds that “All the pictures have been contributed by users of the site – and naturally they retain rights to the photos, though many are public domain or Share-Alike, making them re-usable for fellow campaigners.”

Pictures can be added by following the link on the Photomap page and can also be imported from Flickr while CycleStreets’ iPhone app means that users of the Apple handset can also upload direct from the street.