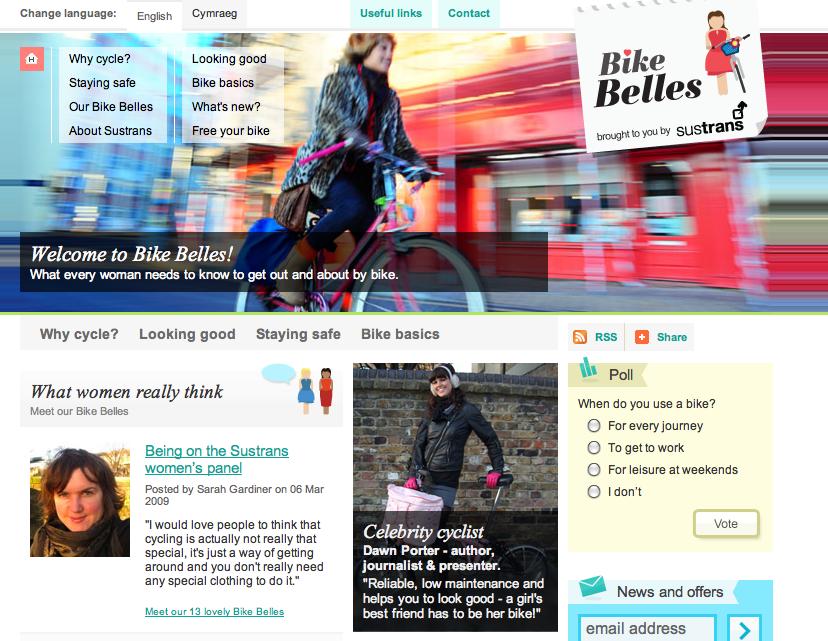 Bikebelles website goes live with mission to get women cycling

Sustrans today went live with its Bikebelles website the organisation's first step in it's bid to encourage more women to cycle.

The new site focuses very much on addressing the reasons women currently don't ride bikes with a lot of tips on comfort and appearance while also stressing the many benefits of cycling in terms of getting fit, losing weight, and looking younger.

Melissa Henry, Sustrans' Communications Director, underlines the reasons for the campaign: "Getting on a bike brings many benefits. Cycling raises your metabolic rate, helping the weight to stay off; it costs a fraction of keeping a car or even a gym membership; and regular cyclists are as fit as an average person ten years younger."

As reported in our earlier story on Bikebelles the site has been put together by women and and all-woman panel of Bike Belles will feature prominently giving their views on bikes, clothing, and everything to do with the cycling experience.

Sustrans commissioned research shows that in spite of high profile women such as Duffy, Hannah Montana and Madonna taking to two wheels - the majority of women, 79%, are coming up with a variety of reasons why cycling is not for them, with less that one in 10 women cycling more than once a month. Something that Sustrans is keen to change.

This research echoes a similar study undertaken for Cycling England last year, which headlined on 'helmet hair' and the fact that many women were put off cycle commuting because they didn't want to get hot and sweaty on their way to work and because they were worried about the affect it would have on their appearance.

According to the Sustrans research women aged 35-44 are the most likely group to cycle – 50 per cent more likely than younger women in the 15-24 age group, even so 69 per cent of 35-44 year olds never rides a bike despite 68 per cent of them having access to one. According to the research women in the South West of England and Wales are the most likely to cycle while their sisters in the North West and Scotland are the least likely with one in five women in these areas saying they were “too old” to cycle.

Overall 17 per cent of women questioned considered themselves too old to cycle, this compares dramatically to the Netherlands where women over 65 ride three times the distance of 19 year old British men.

Sustrans will also be organising female-friendly cycle rides in the summer using traffic-free sections of the National Cycle Network.