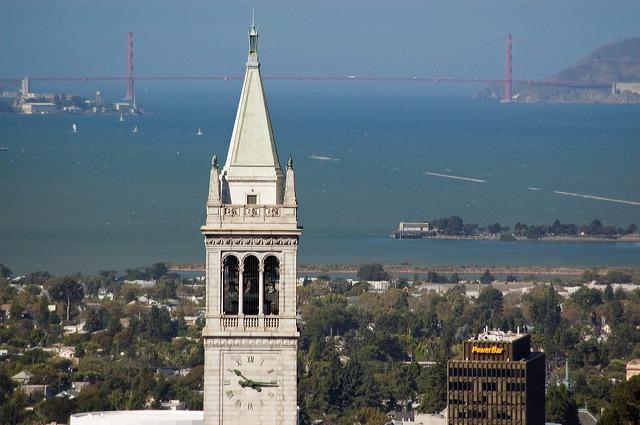 Bikes subject to same laws as cars - and you'll be fined less for using mobile at the wheel...
by Simon_MacMichael

It seems that tuition fees aren’t the only thing students pay more for in the United States compared to Britain. While Oxford undergraduates have been able to avoid fines for riding without lights by proving to police that they’ve bought a set, a student at the University of California, Berkeley has been hit with a $220 fine for locking his bike to a railing rather than a bike rack.

Two weeks after receiving that ticket in November, freshman Devin Shoop received another one for the same amount, this time after rolling his bike through a stop sign rather than coming to a complete halt, according to the San Francisco Chronicle’s website, SFGate.com. Shoop now has to attend traffic school so as not to have his driver’s license endorsed with a moving offence.

Another student on the same campus to be hit with a $220 fine was Jorel Allegro, his transgression being to ride through a pedestrianised zone rather than dismount.

The newspaper says that while there is nothing new about cyclists facing the same level of fines as car drivers for a variety of transgressions, as provided under Californian’s Vehicle Code, which makes no distinction between cars and bikes, police overzealousness at Berkeley has inflamed students who are already up in arms over increases in tuition fees.

Moreover, as Shoop points out, the fine he got for locking his bike up fell under Section 21113 of the California Vehicle Code, which makes it an offence to park on public property without permission. However, he adds: “I talked to people who got parking tickets in Berkeley, and the most was $60."

While the level of fine is only slightly up on that imposed last year, the number of students ticketed during the current semester is up 43% to 103 compared to the equivalent period last year.

Students are said to have reached breaking point and have set up a campaign that includes bicycle civil disobedience, writing letters to police on the campus, and starting a Facebook group to protest their treatment.

"I was very, very angry," Allegro told the newspaper. "I could have avoided that by being a strictly law-abiding citizen, but who would have thought? I assumed it'd be like $30. Or $50 max. I support myself with scholarships and financial aid, so $220 is food for two weeks."

The newspaper points out that the level of fine is the same as that which would be imposed on a driver caught speeding or, rather more esoterically, “for hauling large quantities of radioactive materials without a permit.” However, it’s almost 50% higher than the $155 fine someone gets for driving a car while using a handheld mobile phone.

"Our main interest is to ensure the safety of pedestrians. We're not involved in setting fines," commented Lieutenant Alex Yao of the University of California Police Department. The money raised from them is channeled to city, county and state authorities, rather than the university.

However, the higher-ranking Captain Margo Bennett from the same unit told SFGate.com that officers were unaware that the fines were so high until they started ticketing students (although, presumably, ignorance of the law wouldn’t constitute a defence for anyone caught riding their bike where they weren’t allowed to).

Captain Bennett said that campus police are now investigating whether there are legal provisions with a lower level of fine that could be used to regulate The $220 fines are "outrageous and exploitative," according to the students’ Facebook group, called Bike Busters.

“This group was created in response to excessive and unreasonable penalties issued to bicyclists (and other human-powered transportive devices) on UCB campus by the UCPD in connection with Alameda Superior Court,” reads the group’s description.

“While fully acknowledging the offense of riding my bicycle on the designated 'zone' of campus, it seems that a $220 ticket for such an offense is outrageous and exploitative. It is apparent that this is not an isolated incident but a newly common and persistent practice by the UCPD as of this Fall 2010 semester (coincidentally at the same time significant budget cuts have been instated).

“It does not seem just nor ethical that the UC and affiliated institutions should exploit their power and position against those who are suffering as much- if not more- from these financially challenging times. I'm offering this group as way to coordinate fellow victims of these exploits and those sympathetic, in order to connect, collaborate and organize against this injustice conducted by our very own UC system,” it adds.

Students have also taken part in a protest bike ride through the campus dismount zone, and are urging the university and city to create better facilities for the town’s bike riders.

"We wouldn't need to have these tickets if we had designated bike routes that connected," insisted biology graduate student Kevin Lunde, 35, another cyclist fined $220, who added, "This fee is way too high."