First ride: Sram Apex. It’s new. It’s got a big cog. It quite possibly has the potential to revolutionise sportive-riding for a lot cyclists out there.
by David Else

For the last few weeks we’ve been road-testing the new Apex gearset from SRAM. Released with much fanfare earlier this year, though surprisingly hard to find in shops, the Apex is less expensive than SRAM’s well-established Rival, Force and Red kit. There’s a range of chainwheel and cassette sizes, but the headline option teams up standard 50/34 compact rings with a decidedly non-standard 10-speed cassette going all the way from 11 to 32T.

We’ll be doing a full review of the SRAM Apex on road.cc soon - but here’s a summary of our thoughts so far: We like it. It quite possibly has the potential to revolutionise sportive-riding for a lot cyclists out there.

To understand why, humour me while I tell a little story.

I’ve got a mate called Aidan Leheup. In the 1990s he was pretty handy off-road, winning national and international mountain bike orienteering awards (Google him - with a name like that it won’t take long). Then he got into sportives when the UK scene started growing back in about 2002. With a compact chainset and 12-27T cassette on his road bike, Aidan found the gears to high for the serious hills favoured by early editions of now-legendary northern sportives such as the Polka Dot Gran Fondo and Fred Whitten Challenge. 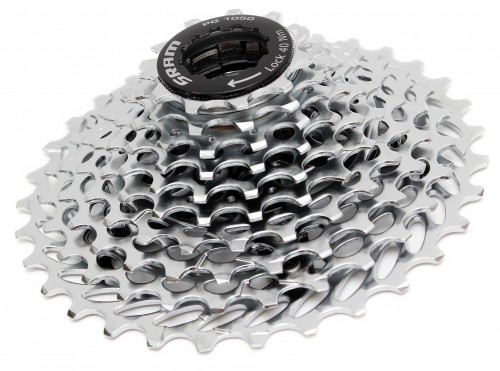 The gears needed to be lower. So onto the road bike went some mountain bike gears: a lightweight Shimano XT 9-speed 12-32T cassette and rear mech - which worked perfectly with Dura Ace levers at the front end. Everything else stayed top-notch road kit, but equipped with this new 34x32 bottom gear it was now much easier to climb the hills that formerly called for out-the-saddle thuggery.

Move on a bit, and I bought that bike off Aidan, and for the next few years used it in many sportives across the UK. With the unusual set of gears in my armoury, I’ve gone up many famously steep ascents - from Peak Hill in Devon to Winnats Pass in Derbyshire - still nicely turning the pedals, while other riders are weaving all over the road or simply walking. And I’ve lost count of the times I’ve had shouts of “Wish I had gears like that, mate”.

Well now you can. If you were one of those strugglers, or if you just want to make the hills a bit easier, Apex could be just the ticket.

You might buy the whole chainset, or just the cassette and mech, and fit it to your current bike. Or if you’re in the market for a new sportive bike next year, look out for models with the Apex 11-32T gears already fitted.

I tested the Apex gears on a prototype bike: a Verenti Rhigos 04 - the new addition to the range of Verenti bikes from on-line superstore Wiggle - which should be available in early/mid-2011.

We’ve reviewed Verenti bikes here on road.cc before, notably the Kilmeston and the Rhigos 03. There’s also the mid-level Rhigos 02 and top-of-the-tree Rhigos 01. All the Rhigos bikes have been designed with UK sportives in mind and the framesets are the same - lugged carbon plus carbon fork with alloy steerer - with the equipment spec getting higher as you go from 04 to 01 model. 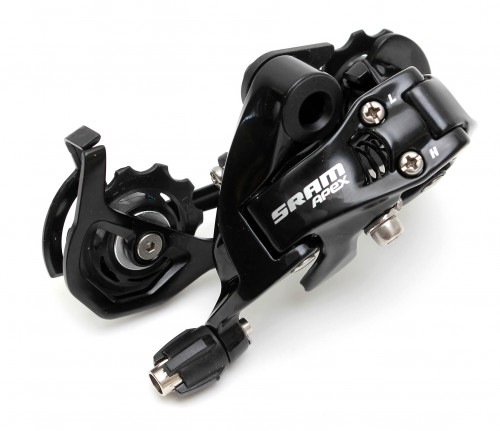 We’ll do a full review of the Apex-equipped Rhigos 04 nearer its official release date, but first impressions are very good. I’ve charged up and down a lot of steep hills, and also done a few longer outings too. The bike feels fast, light and responsive, but still comfortable enough to ride all day. Most important, the Apex gears are smooth and positive. I was pleasantly surprised to find nearly all the ratios available, with chain-rub only in ‘big and big’ and ‘small and small’ (which you’d never normally use anyway), and it was great to twiddle that familiar 34x32 bottom gear on the steepest sections.

Of course, you could get similar low gears with a triple 50/40/30 chainset matched with a standard 27T or 28T big sprocket on the cassette, and you’d also get smaller jumps between the ratios. But the Apex chainset has several advantages: with double rings you get a smaller Q-factor (ie, your feet are closer together, making pedalling more efficient); you get a higher proportion of usable gears (18 out of 20, instead of maybe 20 out of 27 or 30); and, according to Sram’s figures, the Apex is lighter than an equivalent-quality triple chainset, even taking into account the larger sprockets on the cassette and the longer rear mech to handle the extra chain length. Sram bills it as ‘WiFli’ - wider, faster, lighter.

On top of mechanical advantages, let’s be honest, there’s appearance to consider. On a sporty-style bike, a compact just looks better than a triple (well, to me it does anyway). There’s even something psychological going on: when you’re starting to struggle on a long climb, look down at a thin compact going round and round and it just feels better than seeing three big rings churning between your feet. No? Oh, just me then…

Although especially useful for sportive beginners (on the assumption that more experienced riders are happier on higher gears) it’s quite likely that the SRAM Apex and bikes like the Verenti Rhigos 04 will appeal to the old-hands too.

And as for my mate Aidan, I’m not sure if he was the first to use this type of gearing on a road bike, and by around 2006 he certainly wasn’t the only one (I think Albert Contador had something similar fitted in a particularly steep section of the Giro a while back) but it’s very pleasing to see his one-time whacky invention now firmly entering the mainstream.

I predict a lot more sportive-specific bikes with Apex gears on the road next season. Revolutionary? Maybe not. Making a big difference for a lot of riders? Definitely.