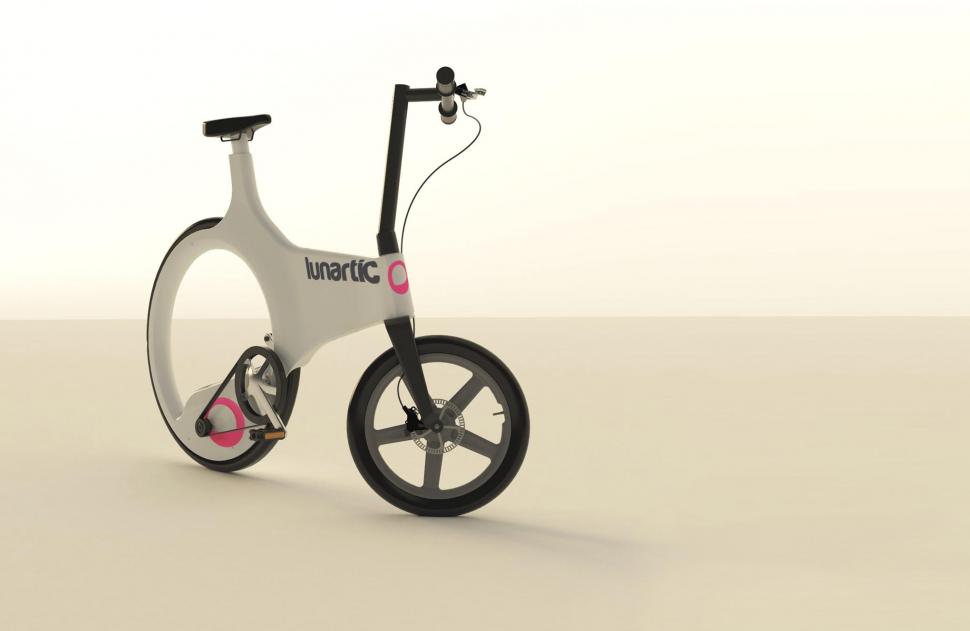 *DISCLAIMER: the future may not actually contain bikes like this… then again
by dave atkinson

We're all for a bit of niche over here at road.cc, so how does a hubless, belt drive Chopper sound? Thought that would get your attention... Such a bike is the brainchild of Luke Douglas, a Design and Technology graduate from Loughborough University. The bike was his final year project and was also a finalist in the James Dyson Awards. So what's going on?

Well, "Lunartic creates a new possibility as opposed to answering a specific problem, placing itself in a niche between existing bicycle solutions", we're told. You might read that as the bike solving a problem that doesn't exist, but it does have some interesting tech going on. The hubless rear wheel is the most obvious place to start. Obviously every concept bike that's ever been drawn by a design student has hubless wheels, but it's a lot rarer to see them in a working prototype and rarer still to hear an attempted justification for them.

In this case the hubless wheel allows the Lunartic to cram a full-size wheel into a bike with the same footprint as a standard folder. With the drivetrain inside the rear wheel the pedals are in the standard position and a belt (of course) provides the drive to the rear wheel. The contact patch looks to be some way forward of a standard folder, sitting more or less directly underneath the saddle, we're not entirely sure how that would affect handling but it should make popping a wheelie pretty easy...

The front of the bike is a standard folding machine with what looks like a 16" front wheel and a nice tall stem and bullhorns. The overall look of the prototype is esoteric, it's a prototype after all and designed to be functional rather than beautiful; the finished bike would be something like the design concept pictured at the top, kind of a cross between a Gocycle and a Polo mint.

And will the concept fly? Well, you can have your say below but here's our two ha'porth for good measure. Hubless wheels certainly look like they're made out of pure future but they're not without their issues, the most obvious of which is that the tyre is captive, making swapping out a punctured tube a case of inconveniently separating the bike into two halves. While we're on that, it you're going to make part of the wheel run in a tube, why not extend it down as a mudguard? Just sayin'.

The other thing you lose is the suspension properties of a wire-spoked wheel which, depending on who you talk to, are either indispensible or unnoticeable. We're camped somewhere in the middle of those two extremes, but we'd certainly say that the twin benefits of an easily-removable, vibration-absorbing rear wheel shouldn't be consigned to the bin lightly. Do the benefits outweigh the disadvantages?

Well, a big wheel in a compact format could in theory be good for rolling, but equally we've ridden plenty of compact format bikes (the Giant Mini Zero being a good example) that don't really suffer from having small wheels and are every bit as fun to ride as a full-sized bike. So when we suggested that the bike might be solving a non-existent problem, that's kind of our conclusion. What's yours?

*DISCLAIMER: the future may not actually contain bikes like this.