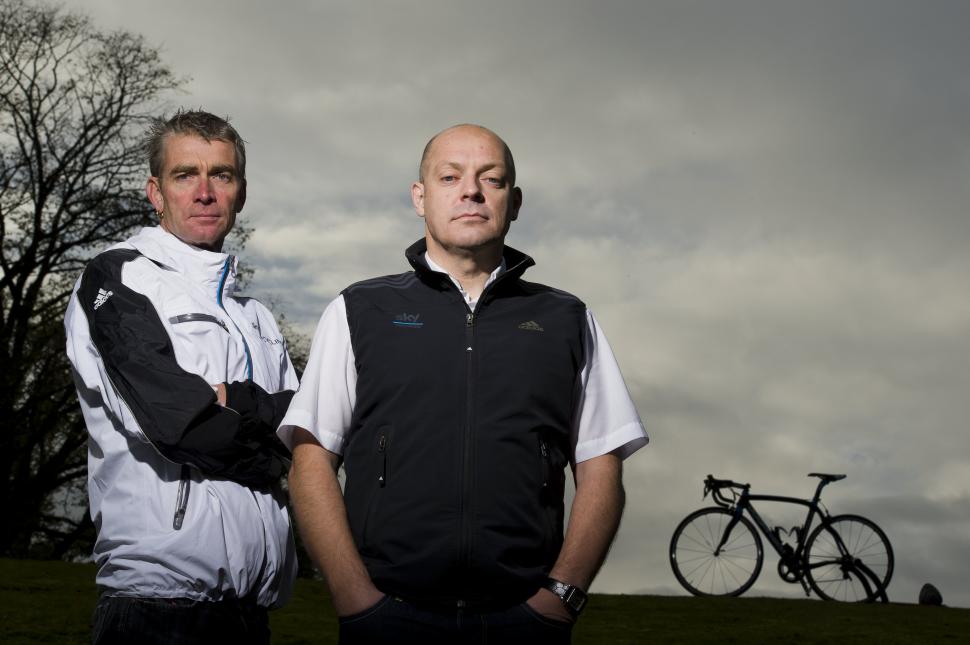 Team Sky interview: Reflections on the mistakes of 2010, and looking ahead to 2011

"The right riders for the right race," as Team Sky looks to shake off debut season hangover...
by Simon_MacMichael

Team Sky’s management admit they made a mistake in adopting a “one rider, one race” approach as they built their debut season around efforts to improve on Bradley Wiggins’ fourth place in the 2009 Tour de France. Instead, 2011 will see the team take a more balanced, season-long approach as they look to hit the target more consistently in races throughout the year without focusing primarily on cycling’s biggest race.

Team principal Dave Brailsford and sports director Sean Yates are reflecting on the British ProTour outfit’s 2010 campaign, and outlining their plans for 2011, in the cosy setting of the bar of an imposing manor house turned country hotel and spa in a secluded, leafy setting just by Windsor Great Park.

There’s very much an end-of-term atmosphere in evidence. Bikes are being bagged up, and a table in the lobby is covered with Team Sky jerseys, a note alongside requesting riders to add their signature before they head off home at the end of a year that had its share of highs and lows, but which ultimately failed to live up to the hype and fanfare that accompanied the team’s official launch in January.

Riders pass through the bar on their way to and from the hotel’s breakfast room. Bradley Wiggins, plus the team’s Italian contingent, stop briefly for TV interviews with Sky Italia. One rider wanders by in sunglasses, and from the banter it’s clear he’s not just wearing them because of the autumn sunshine flooding through the windows; the previous evening’s end-of-season dinner, it transpires, was a lot of fun.

And fun, confesses Brailsford, is an element that was perhaps missing during 2010 as the team focused on the Tour de France, although Its Grand Tour campaign, of course, got off to the best possible start with Wiggins’ time trial victory on the opening day of the Giro d’Italia in Amsterdam.

However, that turned out to be Team Sky’s sole stage win in that trio of three-week races as its efforts in the Tour de France, around which its season was built, came to naught, with Wiggins finishing 24th overall.

Then, tragedy – in the real, human sense, rather than the metaphorical one too often used on the sports pages – followed as its Vuelta campaign was brought to a premature halt by the death of soigneur Txema Gonzalez.

"Next season we'll have more focused teams, better race selection, the right riders for the right race," Brailsford admits. "It must not be about one rider for one race.

"We set out our stall for the Tour de France and, with hindsight, we needed to be much broader. The Tour is a bit like Wimbledon and tennis – the gaze of the nation falls on Wimbledon for that fortnight. That's not what we want to do. The guys are racing all season, and I think we need to be a lot more relaxed, and have more fun."

Yates, who over the past 12 months has seen his role evolve into one of greater responsibility, particularly following the departure in May of the Australian sports director Scott Sunderland, will be taking even more of a key role in 2011 as Brailsford, by his own admission, takes a “step back.”

One of only four British men to have worn the maillot jaune at the Tour de France, he agrees that the burden of expectation caused by the team’s determination to support Wiggins in his pursuit of that prize had backfired.

"You have to have goals and we're certainly not throwing in the towel," he insists. "We're a big team and we have big aspirations. We tried desperately to live up to the expectations this year, and in a way shot ourselves in the foot, but what are you going to do?

Yates, who previously worked as directeur sportive at teams such as Astana and Discovery Channel, which he joined following an invitation from former Motorola colleague Lance Armstrong, adds: "It's easy to portray the season as all doom and gloom but when you look at the whole picture you see 73 podiums, 25 wins, sixth in the list [of the number of races won by individual teams].

“We're ranked eighth for next year. It was a very successful year but we keep harping back to the same subject, the Tour." He reveals, however, that he understands the continued attention on Sky’s performance in that race, given Team Sky’s public statement of intent about the season’s goals.

In 2011, while targets will be spread more evenly throughout the season, the Tour de France of course retains its allure, which is understandable; as the world’s largest annual sporting event, it’s the one that all sponsors want to see their team's riders do well in to guarantee pictures of their logos on websites and in magazines and newspapers, as well as on TV.

Next July, however, Team Sky's goals for that race are lower and therefore more readily achievable, which should also do much to reduce tpressure on the riders.

A top ten finish for Wiggins, and a potential shot at the yellow jersey in the Stage 2 team time trial – although Brailsford admits that other teams with a strong time trial line-up will also target that – are realistic goals, and should also leave scope for individual team members to target specific stages.

"For Bradley, realistically, the top 10 is an obtainable target," says Yates. "He can aim higher, and I'm certainly not writing him off, because he's a class act. We'll try to get him to Paris in the best possible position, whatever that may be."

Brailsford also cautions against writing off Wiggins’ chances solely as a result of his performance in this year’s race in which a decision to start off early in the Rotterdam Prologue in an attempt to beat the forecast rain backfired spectacularly as the three-time Olympic gold medallist endured the worst of the day’s weather.

“He’s a fighter, he’s a winner, and he’s shown all those qualities after the Tour,” says Brailsford, pointing to Wiggins’ decade of achievement before joining Team Sky, adding that “he was the first one to come knocking on my door [following the end of the Tour] to say, ‘right, how are we going to turn this around for next year?”

While concerns have been raised by the potential conflict of interest caused by the close ties between the publicly-funded British Cycling and the commercial venture that is Team Sky, a relationship that is currently the subject of an independent review by Deloitte, Brailsford maintains that there is a clear separation between his two roles.

“Everyone thinks it’s two jobs, it’s not, it’s a different department,” says Brailsford of his roles of performance director at British Cycling and team principal at Team Sky. He adds that he is more comfrotable now with the balance than he was 12 months ago. "I feel way more confident now and I feel very confident that I can step back and let Sean and the guys get on with their jobs and they’ll perform,” he explains.

Brailsford contrasts that with the season just finished where he admits “felt a need to oversee everything and micro-manage a little bit. My job’s in the background," he insists.

As for new signings, Team Sky’s recruitment for 2011 now appears to be over, and Brailsford and Yates are happy with the current roster of riders.

Brailsford confirmed, however, that one big name, four-time World Time Trial Champion Fabian Cancellara, had eluded them - the parties went as far as holding talks - although the capture of HTC-Columbia’s Michael Rogers, himself winner of three rainbow jerseys in that discipline, will provide recompense.

"Sure, we asked about Cancellara - we enquired about him - but ultimately we knew pretty early on that it wasn't going to happen," Brailsford said. "He's going to Luxembourg - it's as simple as that," he stated, adding that the new outfit, which has yet to announce its title sponsor, is in effect, “more Saxo Bank than Saxo Bank is, and that was where he [Cancellara] wanted to be.”

"We've strengthened the team, and I think we have a greater depth now,” he added. With the guys we've brought in, we've identified the key races where we want to go for the win,” he added.

He adds that he envisages the British Academy in Tuscany continuing to provide a stream of talent that Team Sky can utilise. One graduate, Alex Dowsett, recently signed to after a season spent with Trek-Livestrong, while current trainee Luke Rowe may well arrive as a stagiaire at some point during 2011, with a view to joining Team Sky on a permanent basis in 2012.

As the cab pulls out of the hotel driveway to take us back to Windsor station, a rider in team kit flashes by on a blue and black Pinarello, a reminder that for all the talk of marginal gains and ants and chimps, as Yates says, it ultimately comes down to the man and his bike.

Morning-after-the-night-before or not, those training miles have to be got in, with 2010 over and preparation for next season already under way. Brailsford and Yates will be hoping that the hangover from Team Sky’s maiden season will have well and truly cleared by the time the Tour Down Under kicks off the 2011 campaign in less than two months’ time.