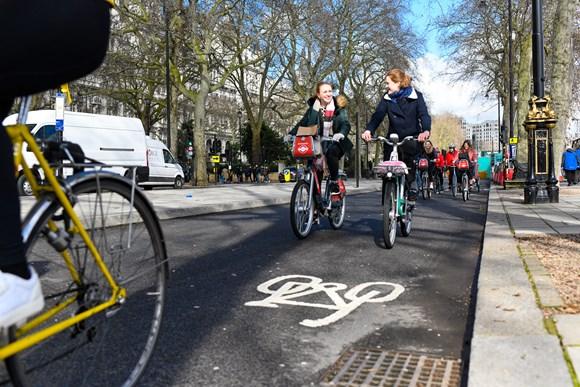 It's also calling for ambassadors for the initiative - whether experienced riders or complete novices...
by Simon_MacMichael

Transport for London (TfL) is marking today’s International Women’s Day with the launch of a campaign called Cycle Your City aimed at getting more women to start cycling – and is calling for ambassadors who can help inspire and encourage others to begun riding.

The initiative, which will run throughout the year, will include workshops and events with the full programme being announced in May.

TfL points out that women are under-represented among the capital’s cyclists, but even the vast majority of those who are able to ride a bike do not currently do so. It says that its campaign aims to:

Establish what further work TfL can do to tackle these barriers.

TfL adds that feedback from the initiative will help influence future policy to help encourage more women to ride in the future.

It says that it wants to explore reasons why many women do not cycle “including the fear of being involved in a collision, concerns around too much traffic and not feeling confident.

“But there are also less well understood concerns, such as lack of representation within the cycling industry, experiences of harassment and hostility, and negative public perceptions.”

Heidi Alexander, London’s deputy mayor for transport, said: “We are proud that thousands more Londoners each year are discovering the many benefits of cycling, from better health to reducing carbon emissions.

“We are doing everything we can to make cycling safer and our growing network of Cycleways is enabling more Londoners of all backgrounds and abilities to cycle safely and with confidence.

“But as these new findings show, more work still needs to be done, particularly when it comes to getting more women on a bike.

“I am delighted that TfL is launching this important new campaign which will enable us to address the barriers that are holding women in London back from cycling.”

Christina Calderato, TfL’s head of transport strategy and planning, added: “We invest heavily in making cycling in London safer and easier for everyone.

“Despite lots of improvement, women are still persistently underrepresented in London’s cycling community.

“It’s clear we need to change that, so they can access the range of benefits that cycling can bring.

“We need fresh thinking, which is why we’re launching a campaign to work with women who cycle along with those who don’t, to better understand the challenges they face.

“Their feedback will inform our decision-making to ensure every Londoner can cycle in our city.”

People interested in volunteering as an ambassador for the initiative are asked to email cycleyourcity [at] tfl.gov.uk, with applications welcome from everyone “from complete novices keen to try cycling, to more experienced riders to share their personal stories about cycling in London.”

TfL said that it “will work with its ambassadors to provide support and advice to try something new and connect them to campaign partners who can deliver free training, mentoring and experiences.

“This could be anything from helping them to build their skills on the road, providing training on how to fix a puncture or supporting them to transition from a regular bike to an electric or cargo bike.

“Bikes and other cycling kit could be provided depending on the activity.”