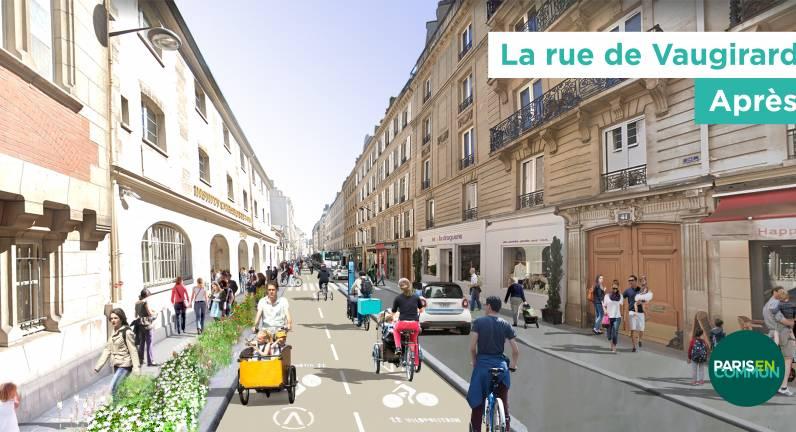 Mayor of Paris Anne Hidalgo, who is seeking re-election in next month’s municipal elections, has promised a bike lane on every street in the French capital, with her pledge coming as data reveal that locals who took to their bikes to get around the city during transport strikes have kept the cycling habit.

The Socialist politician, who has headed the city’s administration since 2014, says that she wants the city to be “100 per cent” bike-friendly by 2024, making it a key part of her re-election campaign.

Strikes against planned pension reforms in December saw the city’s transport system grind to a near-halt, with many citizens either buying new bikes or dusting down existing ones to get around.

And according to thelocal.fr, it appears that the habit has continued into the New Year, with bike counters recording more than double the amount of bicycle traffic compared to 12 months previously.

Citing an article in Le Parisien, it says that in January 2019, an average of 38 cyclists an hour were recorded passing the locations where the counts were taken, but last month that had soared to 88 people an hour.

Jean-Sébastien Catier from the city’s cycling campaign group, Paris en Selle – Paris in the Saddle, said that the numbers were “a sign that the surge in cyclists is a real phenomenon

“The strike showed that [the bicycle] is a dependable and credible means of transport,” he added.

In an article on Hidalgo’s Paris en Commun campaign website, council candidates Audrey Pulvar and Christophe Najdovski – the latter has served as the city’s deputy mayor for transport – outline the plans to make the city greener and provide streets for all, rather than prioritising motor vehicles.

They point out that measures taken by Hidalgo in her first term have resulted in motor traffic falling by 22.6 per cent between 2014 and 2020, and 8 per cent last year alone, resulting in big improvements in air quality.

They also pointed out that taking space away from motor traffic and giving it to bicycles is a more efficient use of road space.

“A private car occupies approximately 10m² of public space to circulate only 5 per cent of the time and transport, on average, only 1.1 people,” they wrote.

“During the transport strike, the bicycle proved to be more efficient and faster than the private car. There were more cyclists than point hour cars on the streets of Paris.

“For example, there were twice as many bikes as cars on Boulevard Voltaire during rush hour. This boulevard has two lanes for motorized travel (ie 6.50 metres wide), as well as two parking lanes (2 × 1.80 metre more), and two bicycle paths (1.95 metres each , or 3.90 metres wide).

“Cycle paths, which consume much less space, have enabled twice as many people to get around,” they explained.

“Rediscovering the human dimension, strengthening the conviviality of common spaces, designing cities where it is good to walk and good to cycle, where it becomes possible again to play, to do sports, cities for children, for the elderly, for the most vulnerable and for people with disabilities, these are new freedoms and a city model centered on the priority given to active modes, walking and cycling, and to public transport,” they added.

“Streets for everyone, green, at a time when the climate challenge requires us to reinvent and, why not, re-enchant our cities.”