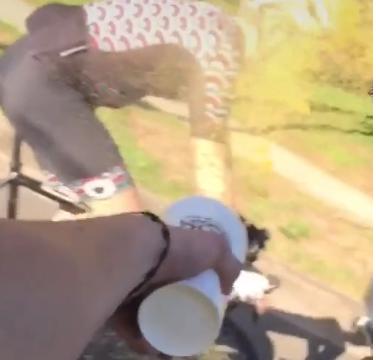 Footage was posted to the video-sharing site, TikTok
by Simon_MacMichael

Footage of an incident in which a car passenger threw orange juice over a cyclist has gone viral after being posted to the video-sharing app, TikTok.

It is believed that the footage was shot in Australia. It shows the passenger leaning out of the vehicle as the driver passes the cyclist, then throwing the orange juice over them from a McDonald’s paper cup.

One commenter to the video called it a “just a d1ck move,” while another observed, “Wanting to do this and actually doing it takes a special kind of sickness.”

“People like this should lose their drivers license and have to ride a bike,” said one response to the post. “Roads are not just for cars and cyclist

Another commented: “When you get charged with assault you gotta post that too.”

Predictably, the video has also attracted a number of anti-cycling comments too, such as one that read, “I’m so glad someone finally did what I’ve always wanted to do.”

Originating in China and launched abroad for iOS and Android devices in 2017, TikTok has been downloaded by more than 1 billlion people globally and was the seventh most downloaded app of the past decade.

1
Blow for active travel in London as High Court judge rules Sadiq Khan’s Streetspace initiative unlawful
2
Near Miss of the Day 525: Cyclist has to thump on taxi window as driver squeezes him into verge
3
Near Miss of the Day 523: Tipper truck driver pulls out in front of lorry and cyclist
4
Bike at Bedtime: take a look at the Wilier Filante SLR
5
Threat to axe New Forest’s off-road cycle network as court criticises “out of control” cyclists
6
Brexit price rises - Canyon covers some costs but UK buyers will still pay more
7
Fears new cycleway will lead to drunkenness, drug taking and 'naked selfies in the woods' (no, really)
8
Three Bora-Hansgrohe riders in hospital after driver crashes into training ride