Team GB will have just four men and two women representing the country in the road races at next year’s Tokyo Olympic Games after the UCI confirmed national quotas today.

This time last year, British men were riding high as for the first time in history, three separate riders from one country won all three Grand Tours.

That success was not replicated in 2019, however – and instead, it will be Belgium, Colombia, Italy, France, the Netherlands and Spain who head to Japan with a full quota of five riders for the men’s road race.

Two women qualify for Team GB for the road race, while Australia, Germany, Italy, the USA and the Netherlands will have a full complement of four riders.

There will also be only one British rider in the women’s individual time trial, with results during the qualification period meaning that the country misses out on the second spot.

18 November 2019, 16:53
"Why does everyone hate cyclists?" The mid-ride musings of Michael Hutchinson

Examining the mystery of why cyclists are so unpopular, especially when you consider how lovely we all are. pic.twitter.com/yQA9rDGrwB

The former pro cyclist-turned-writer Hutchinson gives an interesting take on anti-cycling rhetoric - are we really providing the public with a service by being a group to hate on at the expense of others? Discuss!

18 November 2019, 14:46
Callum Skinner says British athletes are being exploited and the system has "lost its way"

Endless scandals, athletes demanding better pay and conditions. What’s going wrong with the British Olympic and Paralympic systems? An overview of the landscape and where the fault lies.

“If your Union was funded by your employer how effectual do you think it would be?” https://t.co/UrIVxKWxRV

Writing in the Sunday Telegraph, Skinner - who holds the Lead Athlete position of the independent Global Athlete organisation - has called for a complete overhaul of how British Elite sport is run. There were further allegations of bullying that emerged at the Richard Freeman tribunal last week, while there has recently been controversy over athletes' sponsorship deals being restricted at the Olmypics, and numerous female athletes referring to an 'old boys club' mentality in coaching team set-ups. He wrote: “The system has lost its way and fault lies at the top.

"The system worked well when UK Olympic athletes first began turning full-time. Athletes were older, often university or trade-educated, and were paid and treated as equals. Athletes are now younger, turning full-time at 17, and sometimes that youth has brought naivety. This is a demographic that has been exploited. Through some of the most successful times British Sport has ever witnessed, no-one has benefitted more than management. It’s high time for change.”

Skinner also gave more details to SportBusiness about the British Olympic Association's 'Rule 40', which protects the exclusivity of the International Olympic Committee's major sponsors, while requiring brands to have all their promotional activities for the Olympics planned by May 2020: “I take a similar stance to the Jess Varnish employment case, the claimants are stating the current rules are unlawful and it’s the defendants job to argue that they are.

It goes both ways, I have benefited from BOA partners, in an obvious sense in terms of attending the Games and the support they provide. I have also done additional paid appearances for BOA partners. It’s hard to quantify to what extent I have been negatively affected. I could have benefited from a personal sponsorship perspective if I had had rights to my image and the freedom to promote sponsors during the games.

“I presume that if I had those rights I personally would have been able to capitalise on Rio 2016 to a greater extent. It varies from sport to sport but as an athlete I found the British Cycling contract more restrictive as they have a series of large commercial partners where they offer exclusivity. In other national federations it’s a different story. The distribution of funds across UK Sport, National Federations and the BOA needs to be looked at. At British Cycling, some management members can be paid 10 times or more than Paralympic champions on the team.”

While Germany, the US and Australia's Olympic committees have also softened their Rule 40 stance, 26 British athletes are currently taking legal action against the BOA, led by sprinter Adam Gemili.

18 November 2019, 15:47
A personal achievement for Callum Skinner, even though the subject matter is disappointing

On a personal note, as a dyslexic kid who was dismissed by some as “stupid” or “lazy” before I was diagnosed, I never thought I’d have a 1000 world column published in a national news paper. https://t.co/UrIVxKWxRV

We understand more than most at road.cc the difficulty of writing to tight deadlines, particularly on difficult topics - so as a dyslexic, Callum deserves special praise for putting his points across so well in his Telegraph column.

The Wiltshire Times reports that a man in his 40's has been left with potential life-changing injuries after a collision with a BMW on the A350 in Westbury last night.

The driver and three passengers, three men and one woman aged between 21 and 46, had all left the scene when Police arrived and were found walking along Coach Road. All have been arrested on suspicion of multiple offences including causing injury by dangerous driving, failing to stop at the scene of a road traffic collision and drink driving.

The cyclist has potential life-changing leg injuries and is being treated at Southmead Hospital, and Police are appealing for witnesses.

We're delighted to announce @ALE_cycling will become the Movistar Team's official partner for race equipment as of 2020! #IAmAlé #TheWayWeRide

"The design and details of the new equipment that Movistar Team will wear remain still secret, although during the Gala held this Saturday some small details were revealed, such as the main colour of the equipment, which will once again be light blue and navy. The official design of the Movistar Team 2020 kit will be unveiled at the official presentation of the team, next Thursday, December 19 in Madrid." With steel tubing and carbon forks, Meteor Works say the Æsir is "designed to excel in a variety of fields", and is touted as a commuter, audax crusher, bikepacking steed or a winter bike. It's priced at £1,500 and available in numerous build options with both 1x and 2x gearing, head over to the Meteor Works website for more info.

Apparently it's located in Gran Plaza 2 in Madrid, if you happen to be in the Spanish capital any time soon and fancy taking a look for yourself. The man himself doesn't appear to have spotted it yet but he's been tagged numerous times on social media.

CBC reports that 39-year-old Arlin Ffrench got his bike stolen two days after he'd finished his mammoth three-year challenge to bike every street in Vancouver. He decided to take it on as a way of getting more exercise after quitting his job as a bike courier and getting a desk job: "I like cycling and I've always been interested in maps, so it just made sense. I've lived in the city since 2002 but I really got to learn the city this way."​

Ffrench was all set to create a video to share on Reddit detailing his adventure, but shared the timelapse map above instead because of the unfortunate bike theft incident.

I wish I could bunnyhop high enough to say hello. Hope you enjoyed the race from up there, this one was for you pic.twitter.com/KuXnuy3vcz

Van der Poel was known to be very close to his late grandfather, and won back-to-back races in Saturday's World Cup round in Tabor, and on Sunday at DVV Flandriencross. He told Sporza: "It has been a very tough week, it was harder than expected."

The Polish Team Ineos rider got dirty over the weekend, with quite a few roadies taking to cyclocross as part of their off-season schedules. Movistar's Marc Soler and Astana's Luis Leon Sanchez were also racing CX in Catalonia.

We stood in the cold of Boston and wept. Wept to hear of a husband missing his wife killed in a crosswalk. Wept to hear of the sister who misses her ceased sibling’s laugh. Wept to hear the motorist who accidentally killed a cyclist 22 years ago and carries the grief. #WDoR2019 pic.twitter.com/NOiXdQ8kh6

All over the world yesterday, people were taking to the streets to call for an end to 'traffic violence' and for better infrastructure to reduce road deaths. On the World Day of Remembrance website it says: "Life is not a car part.

"This theme is based on Pillar 3 of the Global Plan for the Decade of Action for Road Safety – Safer vehicles.

"Notwithstanding global efforts to the contrary, the type of road mobility that is in place throughout the world still fosters an unbearable number of deaths, serious injuries and illnesses every year, both as the immediate consequence of road traffic crashes and through air pollution."

We’re setting up for #WorldDayofRemembrance by laying out 100 body bags, symbolizing the 100 people killed on US streets everyday.

Join us at noon on Bowling Green to commemorate the lives lost and demand action to stop the killing.#WDoR2019 #endtrafficviolence pic.twitter.com/IBMaaHqoyj

This #RoadSafetyWeek thousands of schools, organisations and communities across the UK will stand up for safe streets. Here's how you can get involved: https://t.co/NC5s5ifmNH @Brakecharity pic.twitter.com/BXd73MiUgc

There is more information and info on how you can get involved on the Road Safety Week website. Marin NIMBYs: If you put a bike lane on the Richmond-San Rafael Bridge, no one will use it. 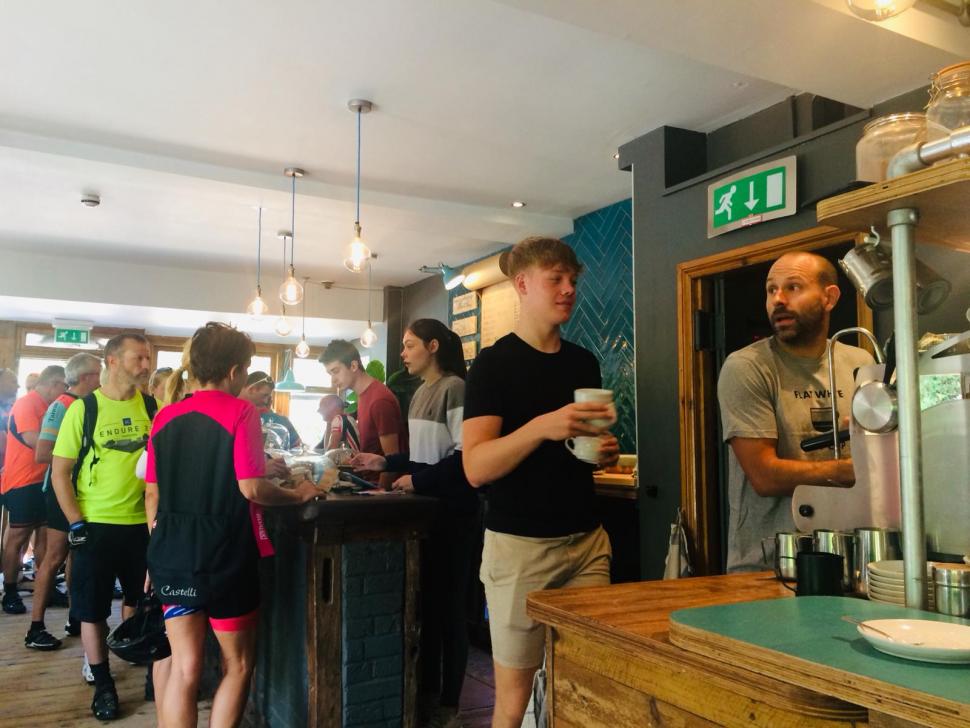 Here's some of the things you've missed if you've been away with the non-cycling fairies this weekend...

Near Miss of the Day 332: Oncoming driver *skims* cyclist without slowing