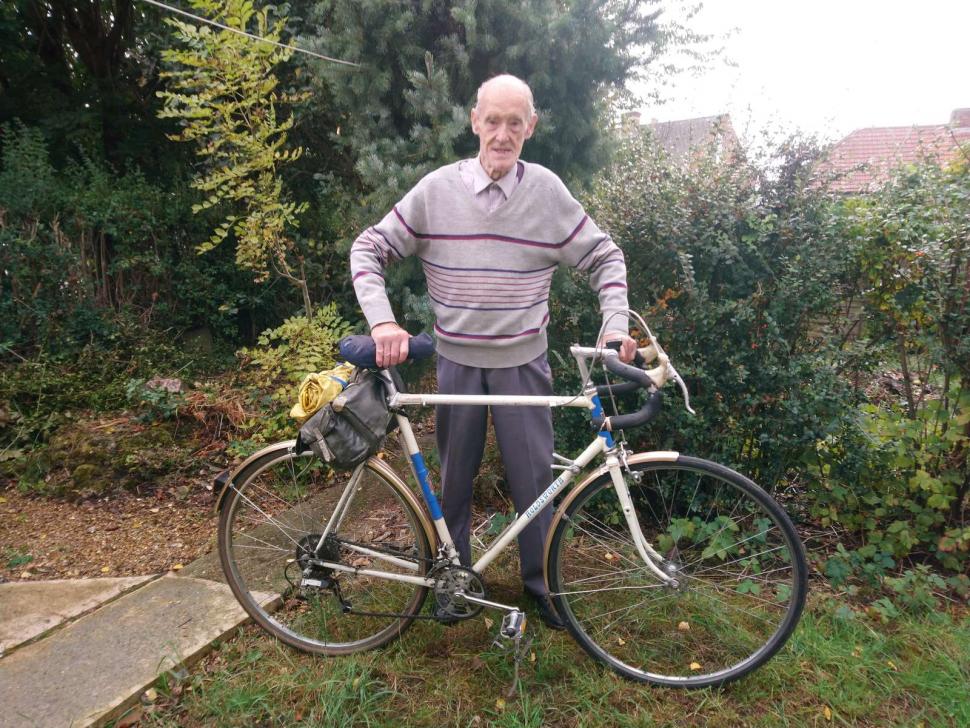 82-year-old from Hampshire has been recording his mileage for almost seven decades - and still rides 8,000 miles a year
by Simon_MacMichael

A cyclist from Aldershot will tomorrow become the first person in the UK to have clocked up 1 million miles on a bicycle during almost seven decades of riding.

Russ Mantle, aged 82, will hit the landmark by riding just four miles from his home to the Canal Café in Mytchett, Surrey.

The lifetime Cycling UK member, who completed his apprenticeship as a carpenter after finishing his national service, said: “I haven’t really been going for it, the miles have just naturally piled up because I enjoy cycling so much that’s it’s just natural to be a mile-eater.

“Even when I was in my 60s and 70s, I was doing my highest mileages, so it just shows you that as you get older you don’t necessarily have to do less."

He has had to rein in his annual mileage due to age but is still on track to hit 8,000 miles this year –  which he admits will be his lowest ever annual total.

Cycling UK chief executive Paul Tuohy said: "Cycling a million miles is not only incredible it's almost incomprehensible. Russ never set out to break any records, cycling is simply a part of his life.

“Cycling UK's mission is to get a million more people out on their bikes, it's amazing that we're celebrating one man's achievement of cycling a million miles in his lifetime.

“Russ is an inspiration and he shows us all what is possible."

The octogenarian – nicknamed Mile-eater Mantle’ – was featured in the April-June 2016 edition of The West Surrey Cyclist, the magazine of West Surrey CTC.

The article, found on page 17, said that at coffee stops Mantle would “stand out because he looks nothing like the usual lycra-clad cyclist.

“In winter he’ll be wearing not a helmet but a woollen hat, a well-worn gabardine jacket, ordinary black trousers with trouser clips and a pair of normal walking shoes. In summer he’ll be in a cotton shirt, a pair of long shorts and the same walking shoes.

“His bike outside is a large-framed, steel Holdsworth of 1970’s vintage with an ancient Carradice saddlebag topped by a rolled-up cycling cape of some vintage.

“He might then join the slower group for a mile or so but, at the first junction, he’s likely to turn off on his own or start walking up the first steep hill.

“But don’t be deceived by appearances. In earlier days even the hard cyclists would have to fight to keep up with him and he’d stroke up many Surrey hills in top gear.

“This man is a cycling legend whose achievements as a former racing cyclist and cycle-tourist are on a scale that none of us is ever likely to remotely approach.”

The winner of 28 open time trial events between 1953 and 1973, Mantle has lived in his parents’ former house since 1949, and going by the article it is something of a shrine to cycling.

With his father serving in the Royal Engineers, Mantle would often move house and school while growing up, which helped him develop a sense of independence and self-reliance.

Most of his riding, naturally, has been undertaken in the UK – including cycling to and from football matches as far afield from Aldershot as the Midlands – but regular trips abroad have also seen him conquer the climbs that feature in the Tour de France and Giro d’Italia.

Over the years, he has suffered a number of serious injuries, including one when he was hit by a lorry and spent three days unconscious in hospital.

In 1985, the frame of his Holdsworth bike was snapped in two. He repaired the broken seatpost himself, using araldite, an old seat post and some sheet aluminium and 30 years on was still riding it.

Mantle is a member of the 300,000 Mile Club, which lists on its website UK cyclists who have passed that benchmark.

In all, the website lists 58 people still active who have surpassed 300,000 miles while a roll of honour commemorates a further 103 who have done so but have now passed away.

Kenny was killed by a driver who failed to see the 72-year-old as he rode his bike on the A38 near Burton-on-Trent in 2011.

1
Canyon unveils 6.2kg Ultimate CFR road bike
2
Five cool things coming soon from Mavic, Suunto, Kask, Topeak and Maxxis
3
Drunk cyclist with defective brake jailed for injuring pedestrian in Norwich
4
After child skids into wall on her scooter, are Bath Two Tunnels cyclists and other users of greenway being deliberately targeted with oil?
5
Near Miss of the Day 453: Punishment pass on two-abreast cyclists
6
Near Miss of the Day 451: Driver flirts with head-on collision to get to red light slightly sooner
7
Fabio Jakobsen out of coma as team mulls legal action against Dylan Groenewegen
8
Noel Gallagher says the only downside of cycling is "the f***ing helmet"