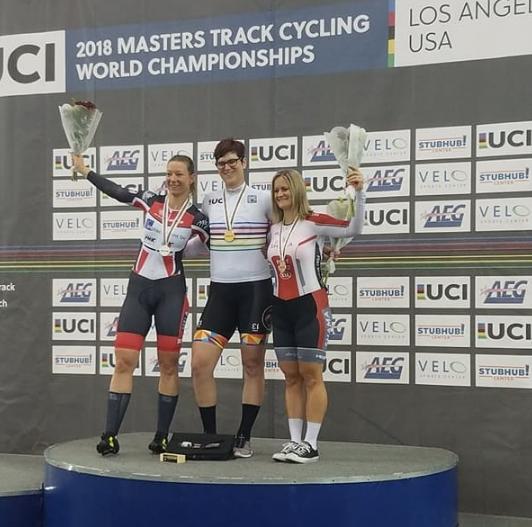 Dr Rachel McKinnon has successfully defended her 35-39 age group women’s 200 metre sprint title at the UCI Masters Track Cycling World Championships in Manchester, reigniting the debate over whether transgender athletes should be allowed to compete in women’s sport.

The 37-year-old Canadian, who lives in the United States, also set a world record in the heats for the event at the National Cycling Centre on Saturday – with The Times reporting “loud cheering” for her opponent, Dawn Orwick.

McKinnon’s successful defence of the title has seen renewed calls for the UCI to excluded transgender athletes from women’s races from the pressure groups Fair Play for Women and Save Women’s Sports, as well as from Jennifer Wagner-Assali, aged 39, who took bronze in the event last year in Los Angeles but did not participate in Manchester.

Speaking of when she was beaten by McKinnon last year (she is pictured alongside her on the podium above), she said: “It was an unfair race and I accepted that when I pinned on the number, and I tried to do my best to overcome the unfairness.

“I do feel that hard-fought freedoms for women’s sport are being eroded. If we continue to let this happen there will be men’s sports and co-ed sports but there won’t be any women’s sports.”

Wagner-Assali denied that prejudice against transgender athletes lay behind the calls on the UCI to exclude them from women’s events.

“We have nothing against the trans women personally or that they want to ride or race their bikes,” she said. “We just don’t think the female category is the right place.”

However, McKinnon today accused British masters cyclist Victoria Hood of expressing “an irrational feel of transgender women,” adding that “an irrational fear of trans women is the dictionary definition of trans phobia” and that “transphobia has no place in sport.”

Hood had claimed in an interview with BBC Sport that some riders decided not to enter the event since "they don't want to compete" against McKinnon.

"The world record has just been beaten today by somebody born male, who now identifies as female, and the gap between them and the next born female competitor was quite a lot.

"The world record was two tenths of a second. I know that doesn't sound like a lot but it is.

"The gap between them and the next female competitor was four tenths, which to put into perspective in a sprint event like this, that would be 15m of the track, when sprint events are usually won by centimetres.

According to BBC Sport, Hood missed the championships due to injury, although a response posted on Twitter to her comments suggests that McKinnon was under the impression that the British rider did not take part because she did not want to race against her.

She also pointed out that Hood falls into a different age group she has turned 40, and that she could find no record of the pair ever having raced against each other.

Her statement (see below) also pointed out that under UCI and IOC rules she was entitled to participate in the event, and that she “supports trans people’s rights to compete in their legally recognised gender.

“Fairness in sport means inclusion and respect of every athlete’s rights and indemnity,” she concluded.