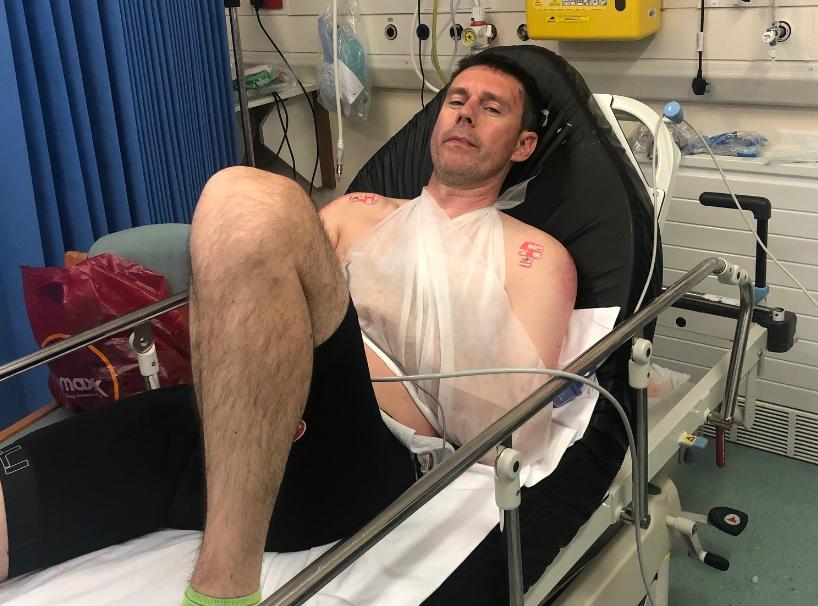 A cyclist who was seriously injured when he was pushed by a passenger in a car has told road.cc that “this craze needs to be curbed” through prosecuting offenders, warning that unless action is taken, “someone will die.”

Paul Cockrill contacted us after we published a witness appeal from Cleveland Police relating to the incident, which happened at around 9pm on the evening of Tuesday 16 July as he rode along the A179 towards Hart Village.

The 44-year-old, who is a member of Ferryhill Wheelers, told road.cc: “I’d just popped out on my own for a 16-mile loop around Hartlepool about 8pm at night as it was such a lovely evening.”

Mr Cockrill, who works as an accountant for an engineering company, said: “I was coming back into town on a 60mph road, downhill and downwind traveling at 34 mph when a blue car came from behind.

“The driver slowed and there were passengers leaning out of the front and back windows. I believe it was the rear passenger who pushed me.

“I fell on the bars, causing the bike to jolt and me to go down head and shoulder first into the road.

“I flipped over then proceeded to slide 30 metres down the road (my father was called by a first attender and he had paced it out when gathering my possessions).”

His injuries included a cracked rib, lesion on the lung, a broken collarbone and a fractured and dislocated shoulder.

“I had to wait six days on morphine while awaiting surgery to fix the shoulder. I spent two days in North Tees Hospital, but when i was told they couldn’t operate till the Monday I came home for the other four days.

“The surgery was complicated as the top of my arm bone was broken into five pieces and Iwas in surgery for around five hours.”

He said that doctors have told him it will take around three months for him to make a full recovery.

As far as the police investigation is concerned, he said: “There is a police camera on the road and the police officer has told me they have it down to five number plates but their issue is they have to be able to prove who was driving and who else was in the car in a court of law, which I’m assuming won’t be easy.

“I imagine however if it was a murder enquiry they would have them in about 30 minutes,” he added.

Anyone who witnessed the incident, or who may have dashcam footage, has been asked to contact Detective Constable Anthony Wallace of Cleveland Police via the non-emergency number 101, quoting the event number 120856 or the charity Crimestoppers, anonymously, on 0800 555 111.