"We’ll soon be wondering why we ever did anything else"...
by Alex Bowden

A new approach to junction design that will become a key feature of Greater Manchester’s Bee Network has been described as ‘genius’ by the region’s Cycling and Walking Commissioner, Chris Boardman. The Cycle Optimised Protected Signals design (Cyclops) is said to be safer for cyclists and pedestrians while being optimised all modes of transport.

The principle feature of a Cyclops junction is an orbital cycle route that separates cyclists from motor traffic. This reduces the possibility of collisions and conflicts – ‘left hooks’ in particular.

It basically amounts to a roundabout-style cycle track that encircles the junction with traffic signals controlling the movement of pedestrians, cyclists and motor vehicles. 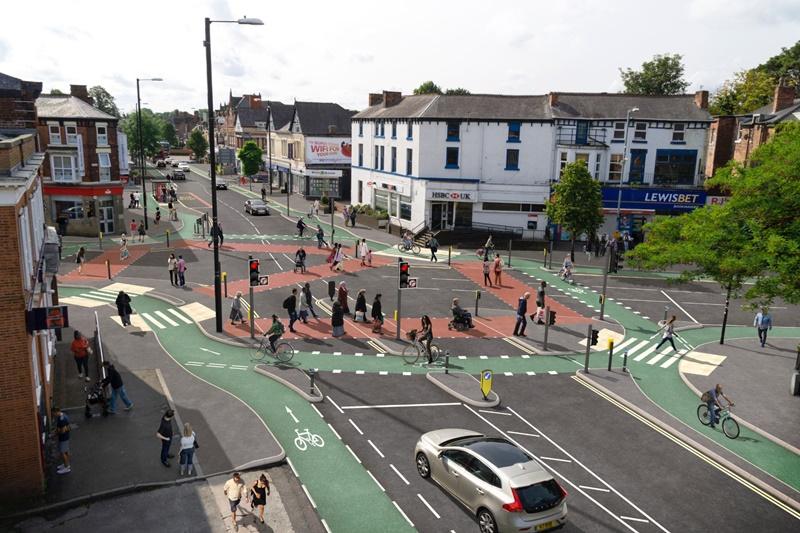 Cyclists can make fully protected two-phase right turns and filter left onto and off the orbital route without signal control.

People on foot are said to be able to get where they want to be in fewer stages and with more space to wait than in other junction designs. There’s also potential for diagonal pedestrian crossings.

The designers say the concept allows all types of junction arrangements to be incorporated within the external orbital cycle system.

Transport for Greater Manchester said that the first locations where a Cyclops junction will be installed would likely be Bolton and Hulme.

Several other UK cities, including Cambridge and Aberdeen, are also working on plans based on the Cyclops design template.

“Junctions are where most collisions occur and can be a scary experience for people travelling without cars,” said Boardman. “If people are faced with one or more of these stressful experiences on a journey, in many cases they simply opt to jump in the car, so tackling this is a top priority.

“Our traffic engineers have come up with a world-leading junction design that will be introduced in towns and cities not only across the UK but abroad too.

“The Cyclops approach makes foot and bike travel far safer and more direct without disrupting other modes. It is frankly genius and we’ll soon be wondering why we ever did anything else. I can’t wait to see the first one installed in Greater Manchester.”