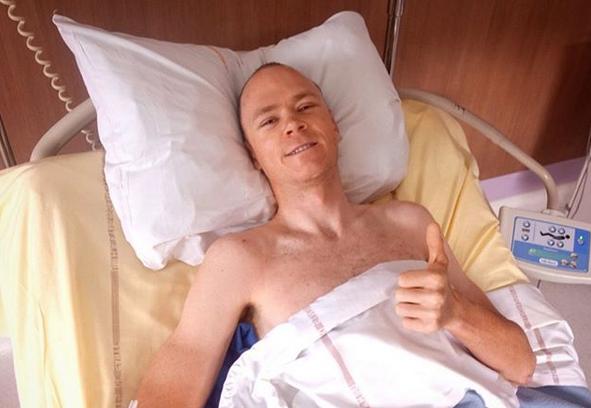 Chris Froome in hospital (via Instagram).PNG

As the Tour de France rolls out of Brussels, four-time Tour de France winner Chris Froome has been released from hospital for the first time since his horrific crash at the Criterium du Dauphine.

Froome crashed into a wall at 54kph while out on a training ride during the 8-day stage race which many Tour contenders use to test their form before the main event.

The 34 year old Briton took his hand of the handlebars to blow his nose when a gust of wind took his wheels out from under him and blew him into the wall; he broke his neck, femur, elbow, hip and ribs in the accident.

On Friday, the Team Ineos rider posted an update on his Twitter account sending support to his team mates who are riding the Tour this year.

He also said a quick hello to the team in a video call in which he assured them that he would be following every second of the action from his bed.

We had one very special guest join in our final pre-race meeting...

Great to see @ChrisFroome back at home as he continues his recovery pic.twitter.com/CEQeKVK4UI

Speaking to Eurosport, Team Ineos sporting director Dave Brailsford confirmed the news that Froome, who would have been going for a record-equalling fifth Tour title, had left hospital.

"Chris has left hospital and was transferred home," he said.

"It's a big step for him. He's managed to put his feet on the floor for the first time in quite a long time.

"A few of the guys here have been to visit him and he's in remarkable spirits for the situation he's found himself in."