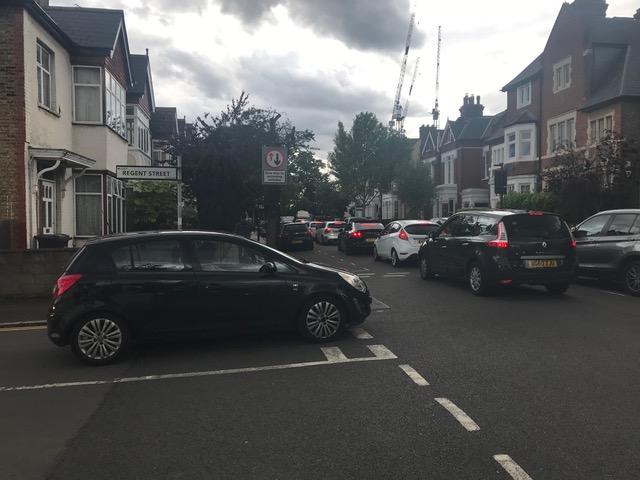 Two Conservative councillors who have been vociferous opponents of a planned cycleway through Chiswick in West London have been accused of hypocrisy after it emerged that they had both driven their cars to a publicity stunt they were holding to coincide with last week’s Clean Air Day.

Patrick Barr and Joanna Biddulph are two of nine Tory councillors sitting on Hounslow Council, with all the Conservative seats located in three wards in the east of the borough – Turnham Green, Chiswick Riverside and Chiswick Homefields. The other 51 seats on the council are held by Labour.

Both the councillors, and their Conservative colleagues on the council, opposed the Chiswick High Road section of the proposed Cycleway 9 from Brentford to Kensington Olympia when it was open for consultation last year, claiming it would increase congestion and air pollution and endanger pedestrians, as well as destroying the village atmosphere.

The pair joined fellow Conservative councillors on Thursday’s Clean Air Day to give leaflets to idling drivers asking them to switch off their engines.

According to the local news website chiswickw4.com, leaflets were distributed at various locations in the east of the borough, including on the planned route of Cycleway 9.

So when it emerged that both had driven there, they were quickly pulled up about it on social media.

Cllrs Barr and Biddolph drove round Chiswick today telling people about #CleanAirDay2019 #CLEANAIRDAY. Not sure they've quite understood how it works. In general, driving > pollution @Barr2018 @JoannaBiddolph Walking & cycling > #CleanAirForAll

Councillor Barr revealed that he had been driving last Thursday when he posted a tweet – subsequently deleted – that the driver of a 237 bus had driven into the back of his car, with road.cc reader Michael Robinson, who alerted us to the story, observing that he had “shot himself in the foot.” 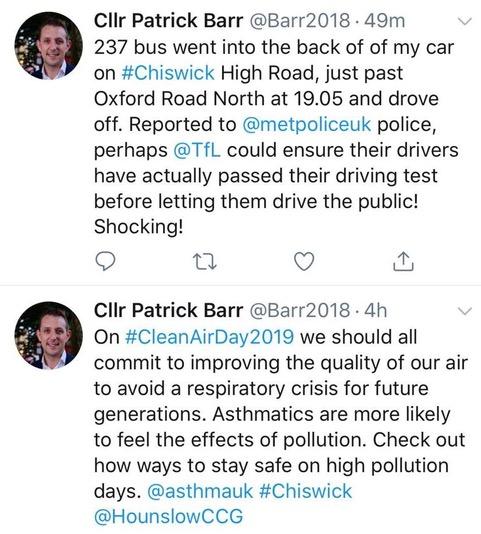 In another tweet, the councillor said that his agenda that day meant he had no option other than to use a car to get around.

I drove to #Chiswick today, I have a car where the engine cuts out when stop. I had many different places to be today. Due to geography and timings it wasn’t practical to cycle or use public transport. However, once parked I walked. Our campaign today was focused on #antiidiling. pic.twitter.com/ZHgw6DwwQK

Councillor Biddulph likewise sought to justify her use of a car on Thursday in a series of tweets, saying her choice of mode of transport was based on “thoughtful decisions” – leading Hounslow Cycling to [point out she could have got around very easily by bike .

It would have been really quick on a bike. Easy parking, pop in to all those places , no fumes to add to #CleanAirDay. Thoughtful decisions.

Local resident Ruth Mayorcas, who is on the organising group of Stop Killing Cyclists and stood as a Labour candidate in the Turnham Green Ward at last year's local elections, drew a parallel between her trips by bike last Thursday with those of the councillor.

You've just explained exactly how it works by bike @JoannaBiddolph, today I cycled to Physio at the Health Centre, to my Optician, to TGT to buy some food, to Alfie's stall for veggies, to the gym in Airedale and struggled home on the inadequate cycle lane on CHR full of cars.

The thread also caught the attention of local resident, the broadcaster and cycle commuter, Jeremy Vine.

Another Twitter user also highlighted that building Cycleway 9 would make it quicker, easier and safer to get around by bike.

Thinks Joanna might saying it’s to dangerous to cycle in the wind and rain. Maybe if there was a segregated bike lane Joanna might cycle more.

The London Borough of Hounslow is expected to make a decision on the section of Cycleway 9 that passes through it later this year.