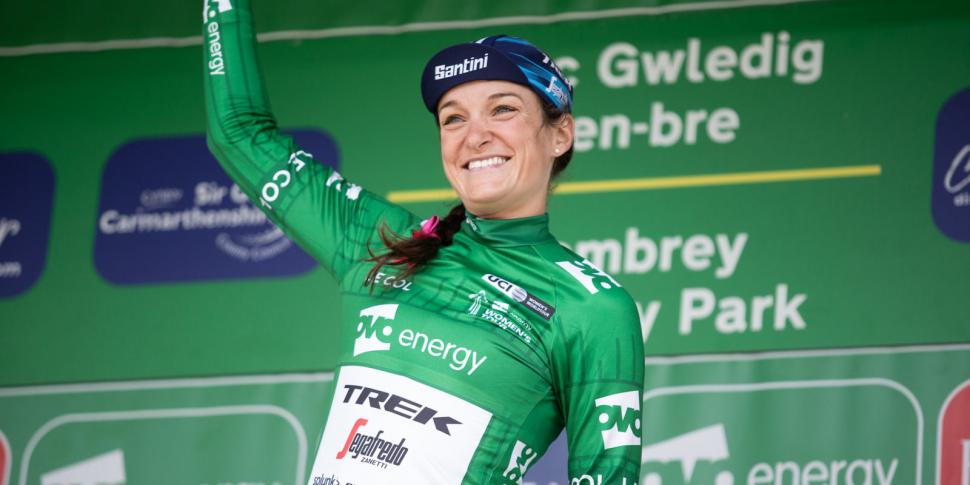 The Trek-Segafredo rider, who returned to racing in April after missing the 2018 season due to giving birth to her and husband Philip Deignan’s first child, held a one-second lead going into the final stage over Canyon-SRAM’s Kasia Niewiadoma.

Deignan, who had taken the overall lead at the race on Friday after winning Stage 5 in Builth Wells, finished eighth yesterday, six places ahead of the Polish rider, to seal her second overall victory in the race. Amy Pieters of Boels-Dolman, winner of yesterday’s stage, completed the podium.

“I think the last time I came here I was probably one of the favourites to win the race and this time I wasn’t a favourite,” Deignan said afterwards.

“It was a different experience, and totally a team performance. I was not as strong as Elisa [Longo Borghini] and Ellen [van Dijk] this week, they were phenomenal, and Anna [Plichta] and Abi [Van Twisk] worked liked horses. We lost Trixi [Worrack, who crashed out] but her fighting spirit lived on, so we did it with her too.”

“Grit and determination helped me, I am away from my daughter for a reason, I am here to do a job, and I have a fantastic team around me that I did not want to let down.

“It was hard today, it was tactical, we rode defensively, and everyone fulfilled their job perfectly. I really have to say thank you to Abi and Anna – they rode phenomenally today and all week.”

Deignan had said before the race that she did not believe she would be in contention for the overall victory, a point she repeated yesterday.

“I was not bluffing, I did not expect this,” explained Deignan, who said she was “incredibly surprised” at her win and “really overwhelmed with all the support we received this week.

“I was here really to consolidate the first block of training and racing I have done, and my expectations were potentially if I got a good opportunity to go for a stage, but thought that wouldn’t happen.

“Yesterday was the first time I thought I had a chance for the GC. The whole race has been pretty open because of the bonus seconds, which made it hard to predict.”

It is Deignan’s first win since she became a mother, and she said: “I am delighted really. I just can’t wait to see Orla at home, I am really proud – of myself and my family for all the help they have given me to be here.

“The perspective you gain from having a year out of professional sport is amazing. My attitude is just about enjoying it, I never had that attitude before, and it’s paying dividends. I feel I am in the best team in the world from a support perspective, and all these awesome women around me lift me up.”

Deignan, who won the road world championship in 2015, has made regaining the rainbow jersey her main target for this season, with September’s race taking place in her native Yorkshire.

The 30-year-old now plans to take a break following a busy programme since returning to racing at Amstel Gold in April.

“Time for some time off, and I will head to Ireland to visit family and enjoy this victory,” she said.