Giro d'Italia 2011: Reaction to what promises to be a very tough route (+ pictures)

The cycling world has given its verdict on the route of the 2011 Giro d'Italia, whose route was launched on Saturday amid the baroque splendour of Turin's Teatro Carignano, a suitably historic and theatrical setting for the unveiling of what promises to be a dramatic race that also celebrates 150 years of Italian unification.

The 3,496 kilometre itinerary, described by Team Sky sporting director Sean Yates as "brutal," sees eight mountain road stages, seven of them with summit finishes, plus a mountain time trial, another summit finish on one of the four medium mountain stages, and just four flat stages. Those are bookended by the team time trial in Turin that starts the race on 7 May, and an individual time trial in Milan that completes it three weeks later.

Three times winner Felice Gimondi, still remembered for his epic battles with Eddy Merckx in the late 1960s and early 1970s, gave the 2011 route "8 out of 10 for the technical profile and 10 out of 10 for the social aspect," whle race director Angelo Zomegnan described it as "a Giro for true champions... only a great rider can win himself the victory in 2011."

With defending champion Ivan Basso set to build his season around a challenge for the Tour de France, the stage is set for team mate Vincenzo Nibali to battle with riders including new Lampre-Farnese Vini signing Michele Scarponi for the coveted maglia rosa, as well as the Giro d'Italia trophy, shown below in the marbled halls of the Reggia di Venaria Reale where the race begins with a team time trial next May. 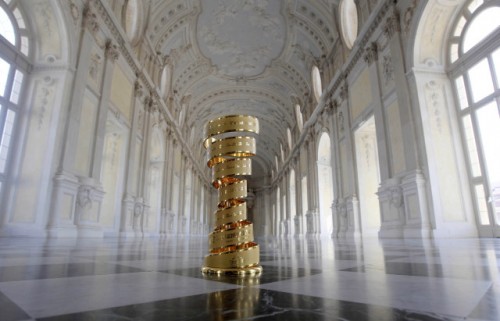 Nibali, whom the Italian media have installed as the pre-race favourite, said: "It's a really difficult and hard Giro, one to study with care, there are a lot of parts that I don't know... it seems to me decidedly the most difficult of the ones that I've had occasion to know."

Although it won't be some months until the full list of contenders is known, the other man viewed as a home favourite for the race is Scarponi, fourth last year, who said: “I feel that I’m among the favourites for the next Giro, even if you have to watch out above all for the dirt roads – all you need is a puncture or technical problem and you can lose minutes. In any event, they’re spectacular, they make the route more heroic, even if they’re difficult.”

The departure from Turin, the former seat of the House of Savoy and Italy's first post-unification capital, is one of many references to the country's history in next year's race, with the route also paying homage to its cultural, geographical and gastronomical heritage, typified by Stage 2's start in Alba, famed for its truffles, and finishing in Parma, a city inexorably linked with its ham and cheese.

That stage, which largely follows the flat landscape of the Po Valley, is tailor made for the sprinters, but once the race recommences the following morning in Reggio Emilia, birthplace of the tricolore flag, the race heads into more hilly country.

That includes a return to the Strade Bianche of Tuscany, which provided one of the more memorable stages of any of last year's Grand Tours as Cadel Evans (below, following Alexander Vinokourov) battled through the mud to claim Stage 6 from Carrara to Montalcino on a day that seemed to roll back the years to cycling's golden age.

In 2011, it will be Stage 5 from the Tuscan port of Piombino to the Umbrian hilltop town of Orvieto that rolls along the mythical white-gravelled roads as the race heads south during its first week ahead of a double appointment with Sicily's Mount Etna, which will be scaled twice on Stage 9.

That's a stage that Nibali, who finished third on the podium behind Basso and Evans last May, is bound to target, starting as it does in his home city of Messina. The 25-year-old, winner of the Vuelta last month, had been holidaying in Sicily with family in the week prior to this year's Giro when he received a late call-up to the Liquigas-Doimo squad after Franco Pellizotti's exclusion.

"Messina-Etna is a stage that belongs to me," maintained Nibali . I know the north face, that of Linguaglossa because riding out from Messina I’ve done it so many times during training. I don’t know the southern ascent, which is the Catania side. It climbs up from Belpasso, I know it’s really hard. I’ll go and take a look.”

After just one day on Sicily, it's back to the mainland with a rest day on the Adriatic Coast before the race heads up, via a couple of sprinter-friendly stages, to the Tyrol ahead of whatlooks like being an incredibly tough final week and a half, with six summit finishes in eight stages ahead of the final individual time trial in Milan.

That Alpine assault begins with the ascent to the Grossglockner in Austria in Stage 13 on Friday 20 May, the race heading back over the border the following day for a summit finish on the Zoncolan. Sunday sees another mountain-top finish, this time at Gardeccia Val di Fessa in teh Dolomites, and on the way there, the riders will have passed the Cima Coppi - the name given to the highest point passed by the race each year - which in 2011 is the 2,23-metre Passo di Giau.

There's no let-up after the second rest day, either - Stages 17 and 18 may not have uphill finishes, but at 246km the former is the longest of the race, despite having the Passo del Tonale thrown in about two thirds of the way to the finish in Sondrio, while the latter starts of innocuosly enough as it heads through the valley away from Morbegno, but packs a sting in its tail with a difficult ascent up towards the Passo di Ganda before heading back downhill to San Pellegrino Terme.

There's still two more mountain stages to come, too - Stage 19 departs from Bergamo and skirts the northern suburbs of Milan before tackling the climb of the Mottarone, above Lake Maggiore, ahead of a summit finish at Macugnaga,.

Stage 19, which weighs in at what by this stage will seem like a mammoth 242km sees what's left of the peloton pass by Turin - the start of the race by now a distant memory - en route to the final summit finish at Sestriere, tackling the tough climb of the Colle delle Finestre ahead of that final ascent to the line.

If the GC hasn't been settled ahead of the final day's individual time trial in Milan, the 32.8km route from Piazza Castello to Piazza Duomo certainly leaves ample scope for a bit of a shake-up.

One rider who won't be figuring in that final time trial, or any other part of the race, for that matter, is Bradley Wiggins (below), who last May got Team Sky's first Grand Tour off to a fantastic start in Amsterdam, taking the maglia rosa in the  prologue.

Like Basso, Wiggins too will miss the Giro to prepare for the Tour de France after attributing his disappointing showing last year in part to the fact that he was drained after the Giro, and instead will be undertaking altitude training.

Team Sky sporting director Sean Yates, who was at the launch of the 2011 race in Turin, told the British ProTour outfit's website that it was one of the toughest Grand Tour routes he had seen.

"It's savage, there's no other description for it," he explained. "Seven mountain-top finishes has got to be some kind of record, and the fact that they are hard ones as well means it's going to be an unbelievably tough race. It'll be great to watch from a spectator's point of view though.

"Although the team hasn't been decided yet, we are going to have someone there who'll be looking to contest the GC, and if they are able to ride consistently over the full three weeks then they will have a great chance of finishing right up the standings.

"I'm not expecting many of the Tour favourites to be competing here now because I think it's simply going to be too hard to do both races in such a short space of time.

"Vincenzo Nibali has got to be the early favourite for me," continued Yates. "He'll have got the belief after his Vuelta win this season and the fact that the race visits Sicily, where he's from, will be another big incentive for him to perform.

"Riders like Damiano Cunego, Stefano Garzelli and Michele Scarponi will also be bang up for it though and they will definitely be worth keeping an eye on as well." 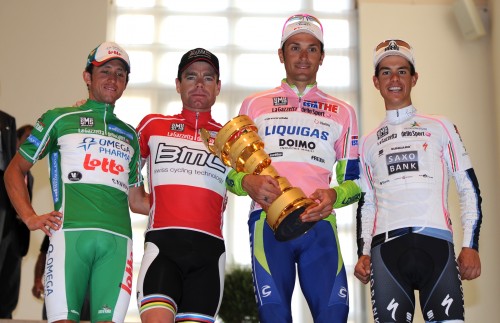 Finally, one of the pink race leader's jerseys that Ivan Basso wore on its way to victory in this year's Giro, complete with race numbers, proved to be the star turn at the Braveheart Fund's annual dinner in Scotland at the weekend.

There, in front of an audience including Mark Cavendish and David Millar, it helped raise £2,000, the highest bid received for any lot auctioned on the evening, to help fund the next generation of Scottish cyclists.