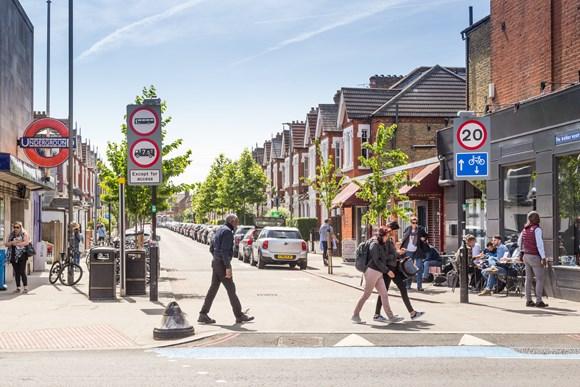 Meanwhile, the City of London plans to go even lower in the Square Mile - 15mph
by Simon_MacMichael

Transport for London (TfL) has announced proposals to make 20mph the default speed limit for the “red route” roads it controls inside the Congestion Charging Zone the centre of the capital – while the City of London is set to go even lower, unveiling plans last week for a blanket 15mph limit in the Square Mile.

TfL, which has today launched a consultation on the proposed 20mph limit which it plans to implement next year, says that speed is a factor in 37 per cent of collisions in London in which someone is killed or seriously injured.

Roads that would be subject to the speed limit, which forms part of Mayor Sadiq Khan’s Vision Zero strategy, include ones that are heavily used by cyclists but have no protected cycle lanes, such as Millbank and Borough High Street.

Mayor of London Khan said: “Each year more than 4,000 people are killed or seriously injured on London’s streets.

“The evidence is clear – lowering speeds on the most dangerous roads saves lives. The proposed 20mph speed limit on TfL roads within the Congestion Charge Zone and at Aldgate Gyratory will protect people walking and cycling and other road users in the busiest part of the capital.”

TfL also said that within the next five years, it plans to bring in the 20mph speed limit in other roads that it is responsible for in boroughs outside the centre, some of which have already implemented it on their own roads.

Jeremy Leach, London campaign co-ordinator for 20's Plenty for Us, commented: "We are delighted to see TfL introducing 20mph limits on all the roads it manages in central London.

“With 20mph limits now firmly established across the capital and the impact on casualties of getting maximum speeds down to 20mph well known, every effort must be made to ensure drivers comply with the new lower limits.

“The combination TfL proposes of 20mph limits coupled to changes in road design and new traffic calming, greater police and camera enforcement plus the opportunities that speed limiting technology now offers is starting to deliver safer streets in London especially for all those who are walking and cycling," he added.

The consultation, which remains open until 10 July, can be found here.

Last week, the Court of Common Council – the most senior decision-making body of the City of London Corporation – voted to introduce a 15mph speed limit on its streets.

The measure, which is subject to government approval, would see it become the first local authority in the UK to bring in such a low speed limit across its territory.

It says that the strategy would prioritise the needs of pedestrians, who account for 90 per cent of journeys in the City.

It also says that cycling has increased in the City of London by 292 per cent since 1999, and that in the past two decades the number of motor vehicles has halved.

Alastair Moss, chair of the City of London Corporation’s planning and transportation committee, said: “The City of London is one of the most well-connected parts of the UK, with 15 Tube stations, seven Tube lines, eight mainline stations, multiple bus routes and a fast-evolving bicycle network.

“We are working tirelessly to support the 513,000 workers that commute to the Square Mile every day, and to deliver the forward-thinking City that Londoners want to see.

“These radical plans will ensure the continued success of not just the City, but wider London and the UK as a leading global business and cultural destination.”