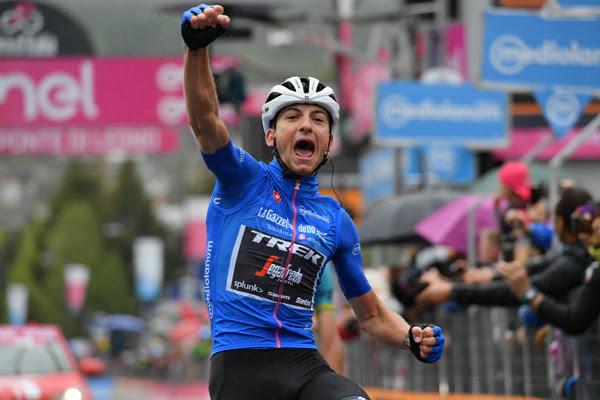 Queen stage may have missed out the Gavia, but provided plenty of drama
by Simon_MacMichael

Giulio Cicccone of Trek-Segafedo has won the queen stage of this year’s Giro d’Italia, outsprinting fellow escapee Jan Hirt of Astana to take victory in Ponte di Legno. Behind them, another big day in the overall battle saw Vincenzo Nibali of Bahrain Merida attack on the Mortirolo and move second overall behind Richard Carapaz of Movistar, leap-frogging Primoz Roglic of Jumbo-Visma.

The route of today’s Stage 16 from Lovere was altered at the weekend to miss out the Passo di Gavia, rendered impassable due to snow and the risk of avalanches.

Instead, after the climbs of the Presolana and Croce di Salven, the race diverted from is planned route to tackle the ascent of the Cevo – making its Giro debut – and the Aprica, before the final climb of the day, the fearsome Mortirolo.

The latter was tackled from its most difficult side today, with a maximum gradient of 18 per cent and provided no respite for the riders along its 12-kilometre length, the summit coming 27 kilometres from the finish.

At the front of the race as they headed onto the climb were the last three survivors of a 21-man break – Hirt, Ciccone and Bahrain-Merida’s Damiano Caruso.

Domenico Pozzovivo, working for his Bahrain-Merida team leader Nibali, set the pace at the front of the overall contenders’ group in the early part of the climb.

It didn’t take long for Nibali, seeking his third Giro d’Italia overall win, to launch his attack and his move, following Pozzovivo’s earlier work, blew the GC group apart, with those dropped including Mitchelton-Scott’s Simon Yates and Pavel Sivakov of Team Ineos.

The latter was in the white jersey of best young rider, and it was the British rider who topped that classification earlier in this year's race, Hugh Carthy of EF Education First, who got across to Nibali.

Behind them, the next move in the overall group came from Astana’s Miguel Angel Lopez, who had appeared to be struggling earlier on in the climb, the Colombian’s acceleration causing second-placed overall Roglic to lose contact.

Antonio Nibali, who had been in the breakaway, was able to put in a spell in support of his brother and team-mate and after he had been tailed off, Lopez and the Movistar pair of race leader Carapaz and Mikel Landa eventually managed to bridge the gap.

By now, with two kilometres remaining of the climb, there was torrential rain.

Up ahead of the now five-strong overall contenders group, Ciccone once again picked up maximum points on his way to setting an all-but-unassailable lead in the mountains competition as he led Hirt over the top.

However, he struggled to zip up a rain jacket handed to him by a member of team staff and threw it away as he started the descent, something he would regret later as he suffered in the cold and wet.

Behind them, Roglic and Yates were desperately trying to limit their losses, crossing the summit more than a minute and a half after the Carapaz and Nibali group, but somehow managed to halve that deficit on the descent ahead of the final climb to the finish.

1
Near Miss of the Day 376: Frightening footage shows driver overtaking cyclist with coach coming the other way
2
Near Miss of the Day 375: Close pass, traffic island and left-hook - all by one driver in the space of seconds
3
New products on the way from Shimano, Lazer, Pearl Izumi, Park Tool & more
4
Win! Fulcrum Wind 40 DB wheels worth £1,100 up for grabs!
5
BMC’s NTT Pro Cycling team bikes for 2020
6
5 cool things coming soon from Fizik, Decathlon, Ashmei, Chrome Industries and Techalogic
7
Dangerous driver who killed cyclist fails to have 10-year driving ban overturned
8
3 winners chosen! 3 sets of Altura autumn/spring cycling kit have been won.