The  threat of avalanches and persistent poor weather have led to the Passo di Gavia being cut from the route of Tuesday’s queen stage of the Giro d’Italia from Lovere to Ponte di Legno.

Originally, Stage 16 of the race was due to have passed over the climb – designated, as the highest point of this year’s race, the Cima Coppi – before tackling the Mortirolo from the most difficult of its three sides.

The new, 184-kilometre itinerary will see the riders re-routed towards the Mortirolo via the climbs of the Cevo – never before featured in the race – and the Aprica. 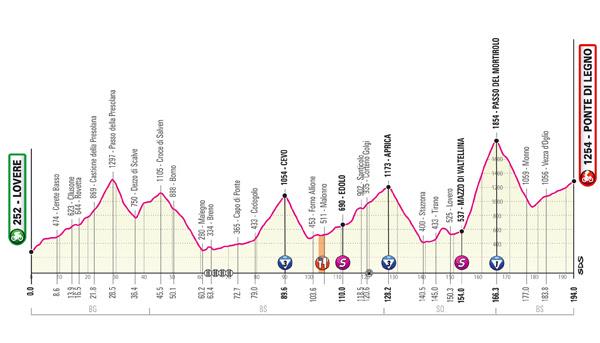 Race director Mauro Vegni said: "As the weather forecast for the coming days predicts further deterioration and the risk of avalanche, we will unfortunately not be able to pass on the Gavia.

“I would like to begin by thanking the provinces of Sondrio and Brescia and all those who have worked to try to keep the original route open.

“We have taken this decision tonight to give everyone the chance of organizing themselves in the best way,” he continued.

“The new route for Stage 16 will include the ascent of Cevo, a new climb for the Giro, then the passage from the most difficult side of the Aprica, before the descent to Mazzo, where riders will tackle the Mortirolo Pass, and thereafter arrival at Ponte di Legno.

At least this year, the stage will go ahead – in 2013, heavy snowfalls meant that a stage scheduled to take in both the Gavia and the Stelvio had to be cancelled altogether.