Live blog: Sir Bradley Wiggins back on the road for 12-date UK theatre tour this autumn (tickets on sale Friday), Tom Dumoulin out of Giro but “not ready to go home,” UCI investigating Alessandro Petacchi for blood doping + more 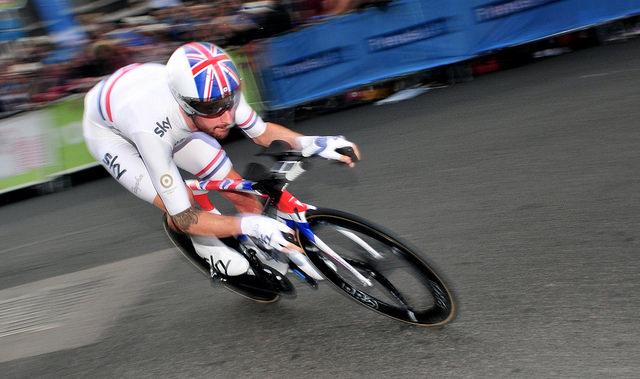 Sir Bradley Wiggins is getting back on the road, for a 12-date one-man theatre show across the UK – and tickets go on sale here at 10am on Friday morning.

The tour will see him recount stories from his racing career, and there will also be a chance to take a close look at some of the bikes that he rode to win five Olympic gold medals and the Tour de France, plus other memorabilia.

Here are the dates – you’ll notice that the one in Harrogate takes place during the week when the North Yorkshire town is hosting the UCI Road Cycling World Championships, an event in which Wiggins won the rainbow jersey in the time trial in Ponferrada, Spain, in 2014. They've highlighted a horrific crash in which a cycle commuter was seriously injured by a motorist. Read our full report here. Giro d'Italia: Dumoulin out but "not ready to go home"

Tom Dumoulin has spoken of his disappointment at having to abandon the Giro d’Italia – a race he won two years ago – due to the injuries he sustained in a crash yesterday.

“I came here for a three week adventure and I wanted to finish it, I’m not ready to go home,” said the Team Sunweb rider.

“I went on the trainer this morning in my room and it was actually kind of ok, but when I stood up on the pedals my knee was really sore. I also tried it seated but that didn’t work either – I could spin the legs but not race.

“For me it’s terrible,” he continued. “Months and weeks of preparation and dedication went into this Giro and in one moment it’s over.

“It’s not how I wanted it to go of course, but it is how it is. I don’t know how bad the injury is, we only know that nothing is broken and it will probably just be swollen for a few days, but we have to see. For now I will just rest and see how it goes.”

Team Sunweb doctor Stephan Jacolino said: “Unfortunately the pain in Tom’s knee was too much for him to continue today.

“He sustained bruising to his quadriceps tendon and surrounding soft tissues, and we hoped the pain might ease as the day went on, but unfortunately that wasn’t the case.

“We’ll see if additional examinations are needed when he returns home but hopefully with some rest, he should be back on the bike with a week doing some easy training.” 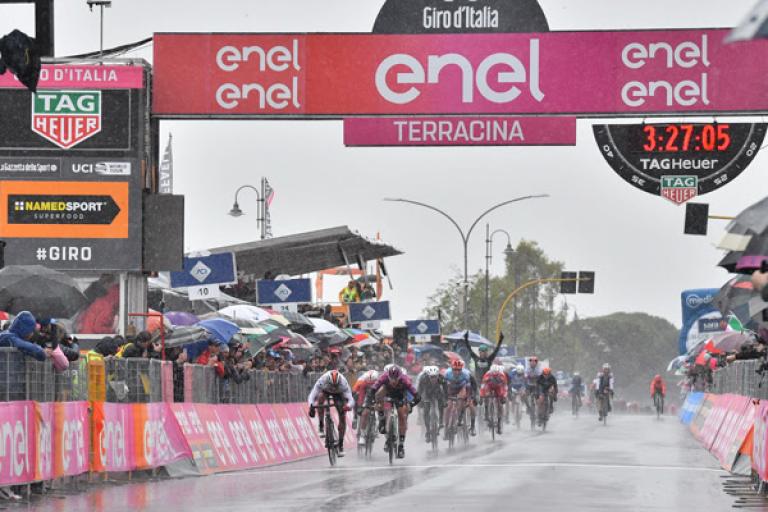 It was a bit of a wet one today. Read our report here.

The sun seems to have migrated across to the UK for once, because it's pretty wet in Italy at the moment. In absence of Tom Dumoulin after his abandon at the start of today's stage it appears his teammate Louis Vervaeke is flying the flag admirably for Sunweb, as he leads the race with under 40km to go.

Approaching 40km to go and @LouisVervaeke is still flying the flag for us at the front of the race. Live data on screen thanks to @VelonCC is looking ! pic.twitter.com/EjIaskwAeD

British Cycling has unveiled a new Mental Health Strategy for the Great Britain Cycling Team that will see its medical staff take a preventative approach to managing athletes' mental health and wellbeing. Find out all about it here.

After having a nasty crash on stage 4 yesterday, it appears the pain is too much for the 2017 champ to continue. He got as far as making it to the transfer to the start of the stage before calling it a day.

We're thinking this might become a regular thing, but Sir Wiggo is at it again "talking to me phone like a complete idiot" as the man himself describes it. Today he's predicted Caleb Ewan to take the win on Stage 5 of the Giro, saying he's getting better every day. Alessandro Petacchi is the biggest name from cycling so far to be linked to the Austro-German blood doping investigation codenamed Operation Aderlass, and is one of four individuals the UCI has today confirmed are under investigation for potential anti-doping rule violations.

The Italian, who retired in 2015, is being investigated for alleged doping in 2012 and 2013, when he rode for Lampre.  His leadout man there was Danilo Hondo, who on Sunday admitted his involvement in the blood doping ring.

The other three people who, like Petacchi, have been provisionally suspended, are ex-pro Borut Bozic, now assistant sports director at Bahrain Merida, the team’s rider Kristijan Koren, who had been racing at the Giro d’Italia, and the UAE Team Emirates rider Kristijan Durasek.

Petacchi was linked yesterday by French newspaper Le Monde and Italy’s Corriere della Sera to Mark Schmidt, the former Gerolsteiner and Milram team doctor at the centre of Operation Aderlass, which hit the headlines after arrests were made at February’s Nordic Skiing World Championships.

He denied having undergone illegal blood transfusions, saying: “I found out from you that this Mark Schmidt was team doctor at Milram when I ride for them [2006-08]. Maybe he treated the German athletes: I’ve never seen or met him. I’ve never been to his clinic, in Germany or elsewhere. I’ve never had a blood transfusion. And I have no idea of the reason why my name may appear in this dossier.”

Regarding his former team-mate, Petacchi said: “I’ve always considered Hondo a friend, we exchanged messages wishing each other well just a few months ago and there’s no reason for a vendetta. I really don’t know how to explain such a huge falsehood.”

15 May 2019, 11:43
Swedish e-scooter share company Voi announce expansion across 150 cities with new e-bike range (and they only launched 8 months ago) 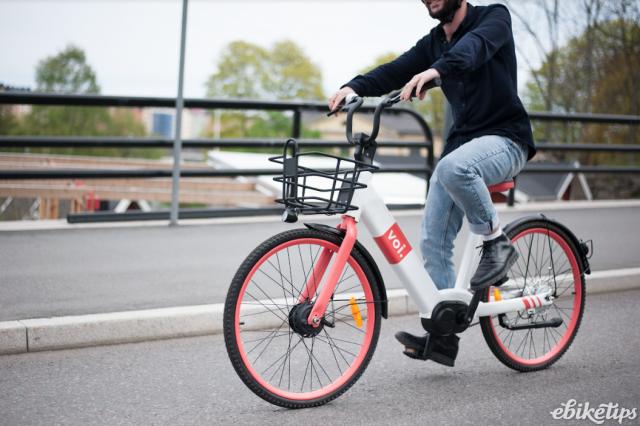 Fledgling micro-mobility company Voi, best known for their shared electric scooters in cities across Europe, are expanding and have now also launched e-bikes alongside their new generation of e-scooters. Full story on eBikeTips.

As the Pro Continental team have a Tour de France wildcard, this could pave the way for Swift to get himself into the race this year as Greipel's lead-out man.

Dumoulin was involved in a nasty crash yesterday that left his GC hopes in tatters and is still suffering with his knee, but it's been confirmed he will start stage 5.

Team Sunweb physician Stephan Jacolino said: "Medically speaking he is cleared to race, but the day's eventuality is dependent on how much pain his knee brings. Hopefully it goes well and the pain subsides as the day goes on."

The Dutch city of Utrecht has topped a new Bicycle Cities Index from German insurer Coya which ranked 90 cities around the world on cycle-friendliness. Read more here, and watch the video below to see some of the infrastructure that helped it secure top spot. 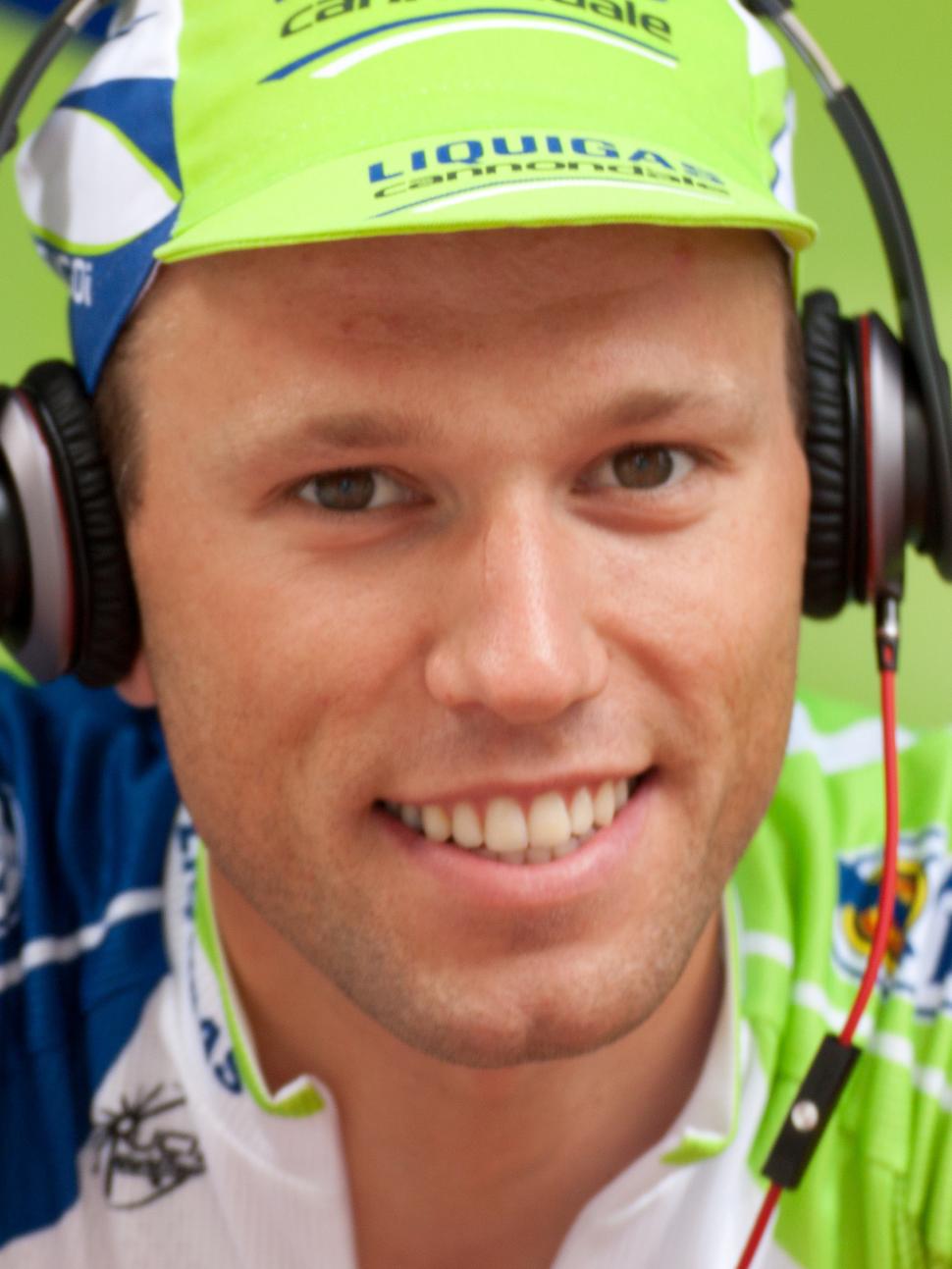 This is all linked to the case where a skier was caught in the middle of a blood transfusion and it's already implicated several pro cyclists and some managers.

Koren, who rides for Bahrain Merida, finished 2'47" behind yesterday's winner. He'll be joined on the naughty step by Bahrain Merida Sports Director Borut Bozic, though his sanction seems to have been from when he was a rider, not during his time in management. 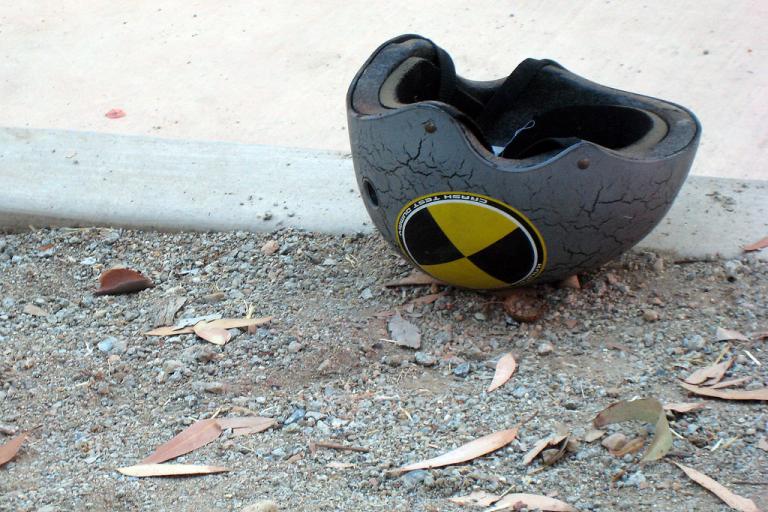 How safe is your helmet?

The results are in from a US university's helmet safety test and it's an interesting read.

15 May 2019, 08:03
The CPA are calling for media and team motorbikes to keep their distance from riders in pro races

It's not just the public concerned with close passes it seems, as the CPA (Cyclistes Professionnels Associes) have announced that riders have brought it to their attention that motorbikes, especially those from the media, are getting up too close to the action. The president of the CPA Gianni Bugno sayds: "The safety of our girls and our boys is fundamental, same as the correct execution of the race. The competitive result must be as fair as possible, it cannot be compromised by drawings, which, even if for few seconds can affect the regular development of the event. The riders themselves are asking the motorcyclists, especially those from the TV, to stay at a greater distance from them, whether they are ahead in or in pursuit. The technology we now have at our disposal allows excellent quality shots even at a greater distance than that what, unfortunately, is becoming habitual. We demand greater attention to this intolerable problem, which creates risks for the safety of the athletes, influences the development of the competitions and jeopardises the real value of the athletes."

There is a UCI Security Commission meeting in June where the UCI will bring up the campaign, saying they will push vehemently for stricter rules to be put in place to avoid collisions such as the nasty example above.

The stage was won by Deceuninck-Quick Step’s Remi Cavagna, who made an attack about 70km from the finish and managed to pull away for an emphatic solo victory.