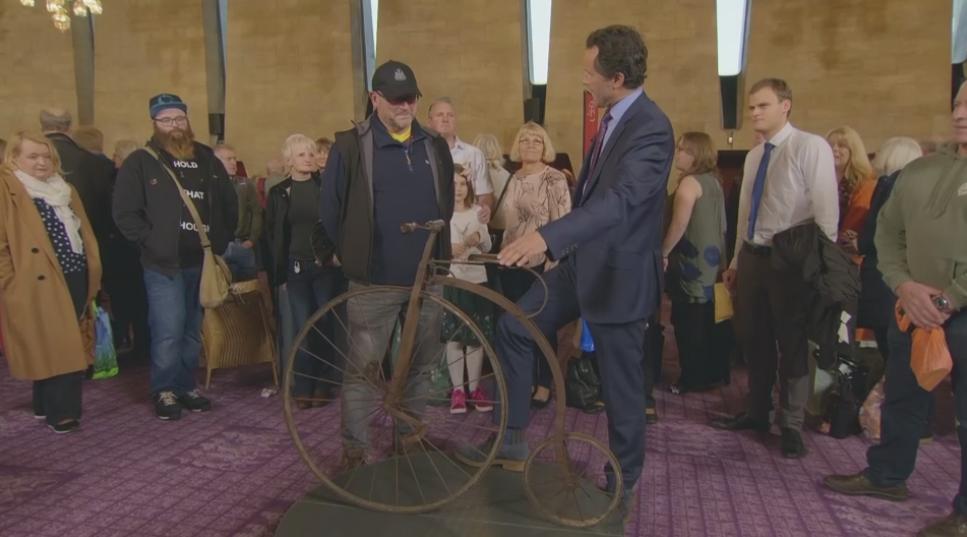 An expert on the BBC TV programme Antiques Roadshow has put a £2,000 valuation on a child-sized penny-farthing bicycle, stunning the owner who bought it for a tenth of that sum in a house clearance sale.

The owner had brought the Victorian bicycle to the filming of the latest episode of the show at Newcastle Civic Centre.

Expert Adam Schoon, who specialises among other things in Victoriana, asked him how he had come by it, and the guest explained: “I got it from a house clearance shop in North Shields, locally.

“It was lying at the back of the shop beside this old sofa and I just saw it lying there and I had a feeling this is going to be worth a bit of money.

“So what I did was I went and did a bit of research on the internet and I discovered there was one in America that was worth quite a bit of money, so I thought how am I going to get this on the cheap?

“I went and picked a few of the items in the shop, a few lights and things like that and I made the guy an offer of £300 for the whole lot. Overall it cost about £200.”

Asked by Schoon how recent the purchase had happened, he said it took place “about a year ago.”

Schoon told him: “The bike is made of two things. Wood and iron. An original handle there and what was this?”, he asked, indicating the other end of the handlebar.

The guest replied: “It was an old file handle so I drilled the end and I carved it a bit and I varnished it with a bit of coloured varnish.”

When asked whether he was “an engineer or something,” the guest said that he was.

“Let’s have a quick look just here and here, there are two rivets which you can see are handmade. This is a hand-wrought bicycle.

“It’s got tyres made of iron. This is before pneumatic, pump-up tyres. Originally it would have had a leather seat, a bit of token comfort.”

Referring to the bicycle’s size, he said: “What must’ve charmed you is the fact that it’s for a child,” to which the guest responded, “I’ve never seen anything like it before, it’s quite fascinating.”

“I think you’ve probably got the feeling that it is actually a period one from the 1880s and indeed, it is an American one,” Schoon continued.

“They call them high wheelers and the men who used to ride, penny-farthings as we call them, they’re called wheel men, or wheeler men.

You can watch the clip from Sunday’s programme here.

1
Five cool things coming soon from Ribble, PNW, Wahoo, Rapha and dhb
2
Near Miss of the Day 436: "Jerk in a Jaguar" overtakes cyclist into oncoming traffic
3
Tory MP helps force removal of pop-up cycle lane in Reigate after just three days
4
Apple Watch with cycling power estimation is a step closer to reality
5
Video: “…not got your licence plate” – Black cyclist stopped by London cop for "anti-social behavior" including not wearing helmet or hi-viz
6
Outdoor and bike brand Alpkit raises £1.5m in crowdfunding – in less than an hour
7
Near Miss of the Day 434: Cyclist starts using camera after driver forces him off road – and captures three close passes in a week
8
New study finds that cyclists don’t hold up motorists