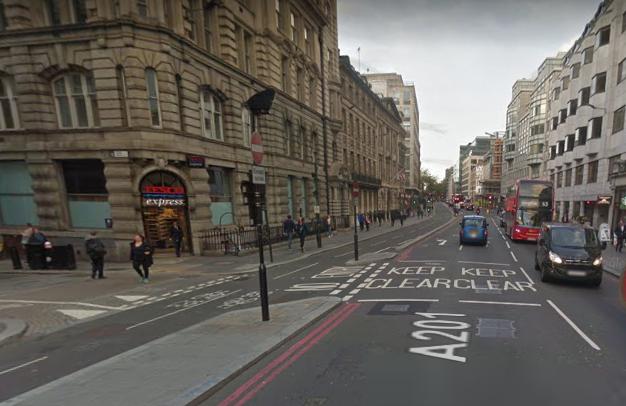 A London cyclist has appealed for witnesses after he came across the aftermath of a collision between a cyclist riding a Santander Cycles hire bike and a pedestrian on one of the capital’s Cycle Superhighways during yesterday’s morning rush hour.

Twitter user @LondonDynaslow said on the social network that the collision happened at around 8.45am and urged anyone who witnessed it to get in touch with the Metropolitan Police Cycle Safety team.

He said it took place at the junction of New Bridge Street, which runs from Blackfriars Bridge to Ludgate Circus, and Tudor Street on Cycle Superhighway 6, one of the busiest cycle routes in the city, which would have been particularly busy at the time.

If you saw the @SantanderCycles bike v ped collision on #CS6 by Tudor St at 0845ish please contact @MetCC @MetCycleCops. It was nowhere near the pedestrian crossing / lights and yet I heard a woman blaming the cyclist. Ped bleeding but conscious. Cyclist down and not moving.

“It was nowhere near the pedestrian crossing / lights and yet I heard a woman blaming the cyclist,” he continued.

“Ped bleeding but conscious. Cyclist down and not moving.”

In a subsequent tweet, he added: “I can't give a statement as I simply passed by afterwards. It was a VERY busy morning though so dozens of people will have witnessed it. Logging off for work now. Hope everyone is ok.”

The incident reinforces something that is typically missing in media stories about the ‘threat’ that cyclists supposedly pose to pedestrians – that in collisions between the two, the bike rider is often injured, and perhaps more seriously than the person who was on foot.

The Metropolitan Police Cycle Safety Team can be contacted via Twitter or on the non-emergency number 101.