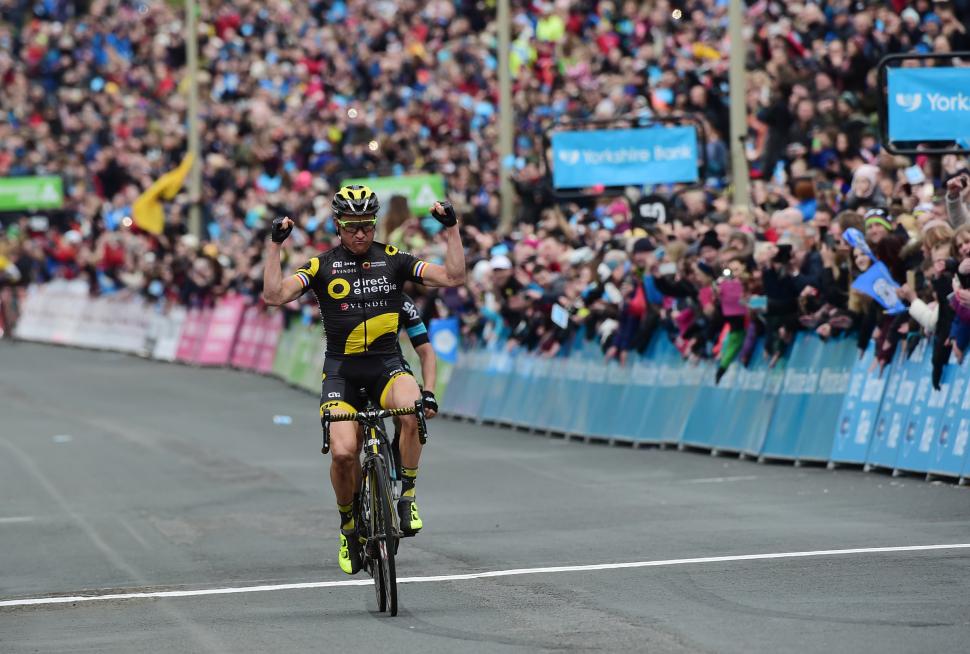 Thousands of protesters will wear masks of Ineos CEO Jim Ratcliffe at next week’s Tour de Yorkshire to protest the chemical firm’s impending sponsorship of what is currently Team Sky. Ineos holds licences to carry out fracking across much of North and South Yorkshire. Friends of the Earth described the firm as “a major risk to this wonderful part of the country.”

Sky announced in December that it was withdrawing its sponsorship of the team from the end of this season and it was subsequently announced that Team Sky will become Team Ineos from May 1.

Team Ineos will debut at Tour de Romandie in one-off kit before its official launch at the Tour de Yorkshire on May 2.

Many of the sites at which Ineos is licensed to carry out fracking are along the route of the race and the Guardian reports that a number of different groups have plans to protest.

There are various plans, including the distribution of 10,000 face masks of Ratcliffe with devil’s horns and various examples of “land art” that could be picked up by helicopter shots of the race.

All campaigners stressed that they had no plans to disrupt the event.

“I don’t think fossil fuels should be included in sport,” said Steve Mason from Frack Free United, which is handing out the face masks. “There is particular irony with the Ineos sponsorship after Team Sky spent last summer riding around with whales on the back of their jerseys to raise awareness of plastics in the ocean.”

Shelley Bath, a founder member of Frack Free Allerton Bywater in south-east Leeds, which is planning a protest in Kippax, said: “It is a disgrace that a race promoting one of the greenest forms of transport is being sponsored by one of the dirtiest industries.”

Frack Free Leeds will unfurl banners on the final stage on Sunday May 6 with slogans such as: “Ineos, tha’s not welcome here.”

Simon Bowens, Yorkshire and Humber campaigner for Friends of the Earth, said: “Ineos shouldn’t be trying to greenwash cycling. The Tour de Yorkshire is a fantastic event showcasing much of the county’s best assets. Sir Jim Ratcliffe and Ineos, with the lion’s share of the 6,000km2 of the county licensed for fracking, is a major risk to this wonderful part of the country.

“Everyone here is very excited for this event and nobody is planning to impede the course, the hard work and professionalism of the riders is respected too much.”

A spokesperson for Team Sky said: “The team remains committed to reducing its use of single-use plastics and is proud of the awareness we have helped raise so far.

“We know this will continue to be a priority for Ineos given their own commitment to new technological solutions on plastics recycling and reuse.

“Ineos is committed to moving towards a circular economy where waste plastic is used as a raw material back into its process, not ending up in the sea.”

Earlier this month, court of appeal judges ruled in favour of activists who wanted to overturn an injunction granted to Ineos preventing campaigners from obstructing its fracking operations.

Campaigners faced being jailed, fined or having their assets seized if they broke the injunction, but judges ruled that it was was “too wide and insufficiently clear”.