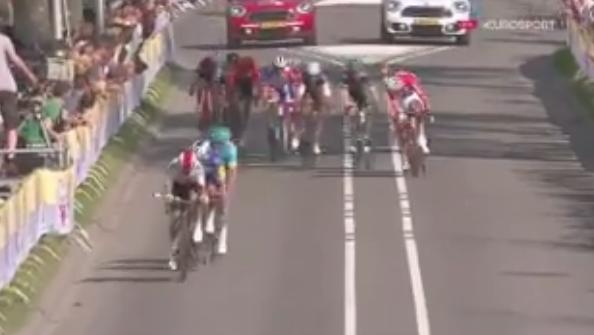 Video: Incredible finish to Amstel Gold Race - one of the best ends to a race ever?

The finish of today’s Amstel Gold Race has set Twitter abuzz – with some viewers reaching for the smelling salts as they wondered whether it might be the best-ever finish of a one-day race.

A relative newcomer to the calendar compared to the five Monuments, each of which have now celebrated their 100th birthday,  –54th edition makes the Dutch race a stripling.

But the drama today was equal to anything we have seen in recent years at Milan-San Remo, the Tour of Flanders, Paris-Roubaix, Liege-Bastogne-Liege or Il Lombardia.

The big ones may have eluded him – though fourth at Flanders and, a week earlier, Gent-Wevelgem – suggests that the 24-year-old will be winning races of that stature over the cobbles before long.

However, victories at the Grand Prix de Denain, Dwars Door Vlaanderen and the Brabantse Pijl mark him out as perhaps the star of the past month’s one-day races – and all that while riding not for a megabucks outfit, but for a UCI Professional Continental team, the Netherlands-registered outfit, Corenden-Circus.

Today, the action switched from Flanders and Norrthern France to the trio of races that make up Ardennes Week (only the second and third of which are actually in that geographic area, we know, but that’s how they are collectively termed).

As it headed towards its conclusion, today’s 265.7 kilometre race from Maastricht to Berg en Terblijt seemed destined to end in a two-way tussle between Jakob Fuglsang of Astana and Deceuninck-Quick Step’s Julian Alaphilippe.

Coming towards the final half-kilometre, a third rider bridged across and entered the equation – former world champion Michal Kwiatkowski of Team Sky.

And then, incredibly, like a locomotive – pulling as he was a train of riders behind him, as he had done for the previous 7 kilometres as he pretty much single-handedly reeled in a deficit of almost a minute to the leaders – the young Dutchman, whose father Adri won the Amstel Gold Race 29 years ago today came through to take a victory for the ages.

What a finish. Twitter, as you can imagine - or at least the cycling part of it - went into meltdown.

"CAN YOU BELIEVE IT?!"@mathieuvdpoel comes from OVER A MINUTE back to win an absolutely astonishing #AmstelGold2019

One of the greatest race finishes in recent memory. pic.twitter.com/Z0SzcrYVtH