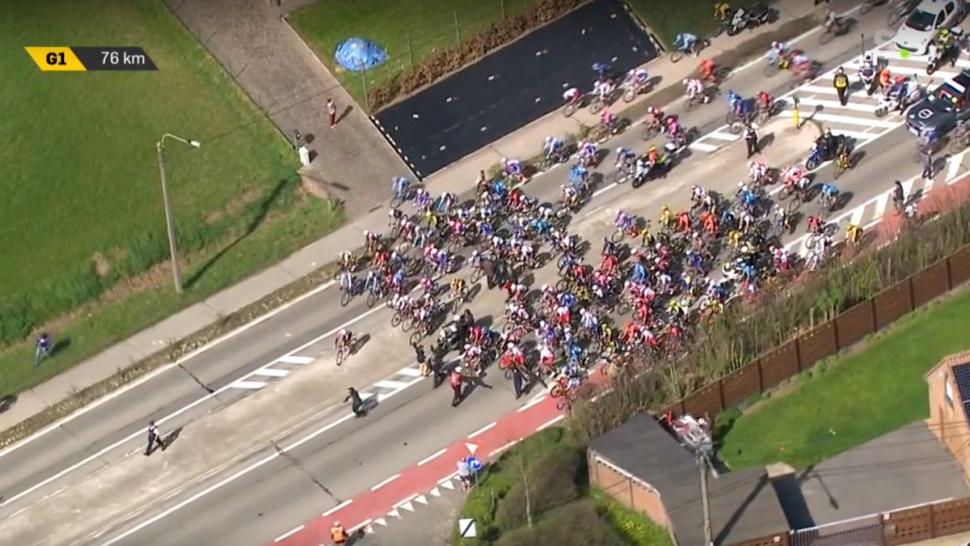 Crash in women's race meant men's break got too close - then ended up behind peloton when race resumed...
by Simon_MacMichael

There was confusion at the Belgian semi-classic the Dwars door Vlanderen today as the men’s race had to be neutralised twice.

The first was because a crash had caused a delay in the women’s race ahead,  won by Trek Segafredo’s Ellen van Dijk, the second due to the break being left behind the peloton when racing resumed.

But even once the race had been halted again to allow the break's 2 minute 15 seconds advantage to be restored, it turned out that one of the riders in the escape group had missed out on the resumption.

The initial neutralisation of the men’s race came with 67 kilometres remaining of the 182.8-kilometre race from Roeselare to Waregem. According to a tweet from Lotto-Soudal, it was so an ambulance could take one of the women injured in the crash to hospital.

#DDV19 An ambulance of the women's race needed to pass. Due to this unexpected situation, the race had to be neutralized. The escapees are caught, but they will get their advantage back. pic.twitter.com/5TQC0QHttF

The eight-strong breakaway group, who had an advantage of 2 minutes 15 seconds, were deemed to be too close to the women’s race, which was won by Trek Segafredo’s Ellen van Dijk.

When the men’s race resumed, it was soon discovered that the break were behind the peloton, so it was neutralised again to allow the leaders to resume their advantage – but Bora Hansgrohe’s Lukas Postelberger failed to resume his position at the head of the race.

Eventually, he took a tow to the front of the race from a media moto – even giving an interview on the fly along the way.

The race was won by cyclo-cross world champion Mathieu van der Poel of the UCI Continental team Corendon-Circus in a sprint from a five-man group.

With victory today, the 24-year-old Dutchman, fourth at Gent-Wevelgem last weekend and winner of the Grand Prix de Denain-Porte du Hainaut seven days earlier, has confirmed his strong form ahead of Sunday’s Tour of Flanders.