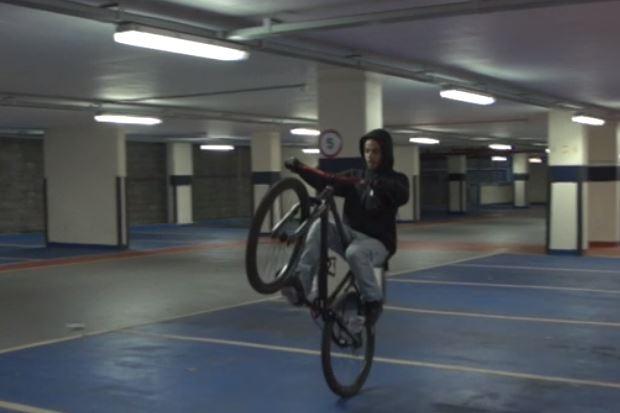 A short video from BBC Bristol explores how youths riding their bikes through the city pulling wheelies are helping fight knife crime.

But as with similar group rides elsewhere which are loosely grouped under the Bikes Up Knives Down movement that originated in London, concerns are expressed in the report about the riders putting themselves, and members of the public, in danger.

Such mass rides often attract negative headlines in local media –Bristol Live, for example, spoke last October of a “dangerous new craze youths [are] carrying out while riding in traffic,” accompanied by a video released by Surrey Police.

However, members of the group featured in the BBC Bristol video, entitled Could Wheelies Keep Kids Away From Knives? spoke of how participating in the rides gives them something positive to focus on with one saying, “It keeps you out of trouble.”

Another said: “The need or the want to be doing anything with a knife anyway isn’t there ‘cause you’re busy.”

“There’s a lot worse stuff that we could be doing and other people would be doing if it wasn’t just doing a wheelie,” a third member added.

One motorist however spoke about a near miss she had experienced with a cyclist pulling a wheelie as she drove in Bristol.

“He came really, really close to the front of the car to the point that if he put his bike down it would have landed on the bonnet of the car.”

Police Sergeant Tom Tooth, interviewed for the segment, together with the leader of the group, known as Urban, said: “Where people are wheeling they are endangering other people or road users, that’s where we would have an issue with it.

“You know, anything that gives young people an opportunity to get together and do something different … “

“Exactly,” replied the officer. “So if you’re leading this Bristol movement then fair play to you, mate. Lots of good stuff will come out of it, hopefully.”

Previously here on road.cc we’ve highlighted the Bikes Up, Knives Down movement in London, which has given rise to similar groups in other cities around the UK.

Those include Liverpool, where last weekend we reported about the Liver Pedlaa Pool group, which was likewise set up to steer youths away from gang violence and gun crime.

Its founder, 21-year-old Blaen Roberts, said: "You can't just say put down knives and give up violence because, some of these lads, that's all they know.

“You need to give them opportunities and life experience and get them out of that circle."