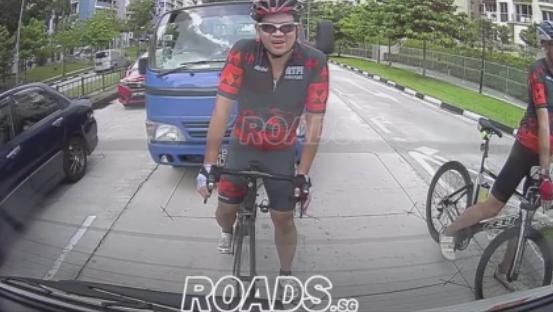 Singapore cyclist and lorry (video still via ROADS.sg on Facebook).PNG

A video showing a lorry driver knocking deliberately knocking a cyclist off his bike after the cyclist hit out and broke the vehicle’s wing mirror has received more than 2 million views on Facebook – and generated a huge amount of debate that one road.cc reader tells us is reflective of the level of anti-cyclist feeling in the country.

The incident, which happened on Saturday in the Pasir Ris district of the the south-east Asian country, has resulted in both the cyclist and the lorry driver being arrested, reports The Straits Times – the former for “rash riding and mischief,” the latter for “rash driving.”

In the video which was taken by a rear-facing dashcam on a vehicle in front, the cyclist, riding with a clubmate, has taken the centre of the lane, with the lorry driver behind him.

The driver beeps his horn twice as they set off from a set of traffic lights and tries to squeeze past, with the cyclist using his forearm to deliver a well-aimed blow to the wing-mirror, causing it to drop off.

The driver then veers sharply to his left, knocking the cyclist from his bike and onto a grass verge.

According to The Straits Times, the driver has claimed he swerved to the left because he heard a noise and thought he might have hit a vehicle on his right.

The video has now received more than 2.3 million views on the ROADS.sg Facebook page, where the post implies that it’s fine for a lorry driver to use his vehicle to knock a cyclist from his bike provided it does not result in the rider being injured.

In a second video that shows the aftermath of the incident, the cyclist - apparently unhurt - can be seen snatching the driver’s phone from him as he uses it to film video or take photos, before returning it.

Referring to coverage of the incident in The Straits Times and subsequent comments by readers about the incident, road.cc reader Jason Kynoch told us: “We need some help here in Singapore. The local media is constantly reporting along negative lines concerning cyclists.

“I just don't know where to start with this one, but the cycling community here needs help,” he added. “This link shows the level of debate here.”