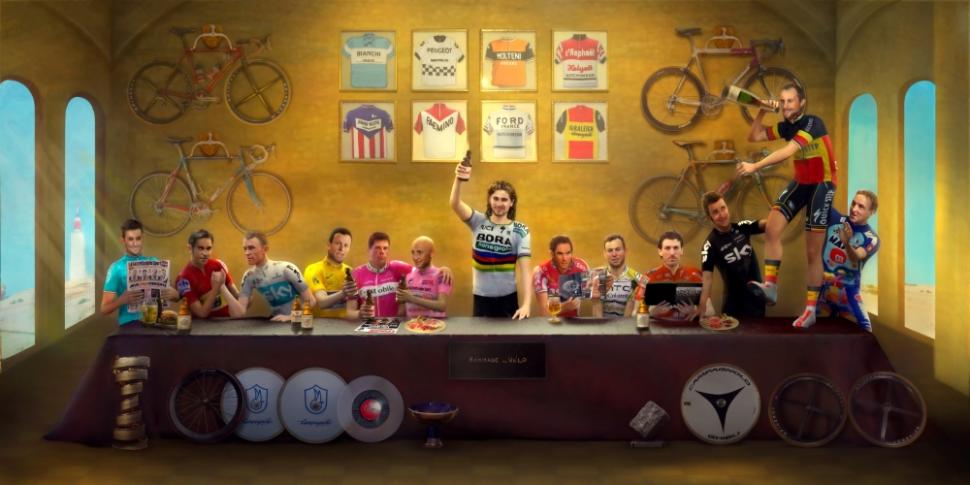 The Last Supper: Cycling Legends - a hommage to Leonardo Da Vinci and some of the sport's biggest names

Peter Sagan as Jesus Christ and Lance Armstrong in place of Judas Iscariot? That is just part of a re-imagining of Leonardo Da Vinci’s masterpiece, The Last Supper.

David Law, who owns the Woking-based cycle clothing business Hommage au Vélo, was inspired, in his words, “to create something unique, never done, and based on a masterpiece” under his brand.

The result is a re-working of the 15th century mural painting that is packed full of references to cycling plus the odd in-joke, and is the fruit of six months' work.

David, who is working on a guide that will highlight all those references, told us: “The Last Supper by Da Vinci was a clear favourite, because  lots of people consider cycling to be their religion, or participate with a religious-like zeal (we all know about Flanders on an Easter Sunday, Alpe d'Huez during the Tour, etc).

“So I wanted the piece to articulate this religious zeal, and I wanted to create a piece with a whole cross-section of the most iconic riders of the last 20 years (since I started road racing in 1998 etc, was on Dave Rayner Fund in France for 4 years). So these riders were influential in my own experience of cycling when growing up.”

He continued: “Every single item in the painting is deliberate and laced with reference, from the jerseys on the wall to the trophies to the magazines being read, to the choice of jersey for each rider, etc – even the scene outside is of Mont Ventoux.”

As for choosing Sagan to take the place of Christ, he explained: “Enough said. A modern icon.” And the selection of Armstrong in the seat occupied by Judas in the original likewise speaks for itself.

“The groupings should be obvious,” David continued. “GC guys of the early 2000s together, Froome vs Contador together, Sprinters together (Mario Cipollini reading Playboy), Classics guys together ... Wiggo looking up to Boonen because we all know he would rather have been a Classics guy if he had had the choice.

“And he's diametrically opposite Froome in the painting because they hate each other, looking in opposite directions. Museeuw trying to calm down Boonen, because we all know Tom liked a bit of Champagne and ... anyway.”

Fabian Cancellara, meanwhile, is depicted studying a guide to mechanical engineering, although David points out, “Nobody seriously believes Cancellara had an engine in his bike – that detail in the painting is poking fun at the flat earthers who spread those rumours, not poking fun at Cancellara.

“It's almost an ode or a homage to the most iconic cyclists of the last 20 years,” he said. “And my brand name after all is  Hommage au Vélo.”

The original, which is 120 x 90cm, is currently on view at the Musette Café in Aldbury, Hertfordshire as part of its Cycling Art Fair. Framed and mounted prints, which David says are guaranteed to “be a massive talking point in your house,” will cost between £200 and £250 dependent on size.

An unframed 60 x 30cm print meanwhile is £75 through the Hommage au Vélo website.