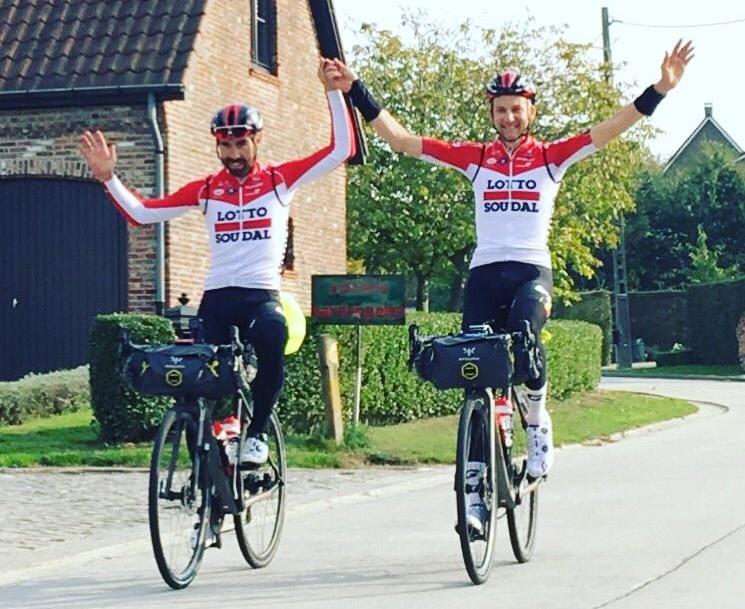 Speaking before they set off, De Gendt said: "We’re chucking all the luggage on the bike in Italy and then we’ll ride from hotel to hotel at ease, without too much of a rush.”

Thomas De Gendt’s definition of “at ease” may differ from yours. The two men rode 1,000km in six days.

“Despite the luggage we carried on our bike, we still had an average speed of more than 30km/h this week,” he said.

The rest of De Gendt’s Twitter output from the trip is rather easier to identify with. The majority of the photographs feature pizza, pasta, pastries or beer.

Day 1 is already finished. 186km in 7hours. We had a nice pizza on the halfway point and started the San Gottardo with a nice tailwind. Beautiful climb, fast downhill and strong tailwind till the finish. #TheFinalBreakaway pic.twitter.com/5XiteZoGXU

He said they suffered only two punctures between them – one just 5km from home.

Day 6. Early start in the dark. Fast pace again and almost no stops. Flat tyre at 5km from the finish but happy we did this. Now time for some rest and vacation. Thank you @Tim_Wellens for the company and the great moments. 200km in 6h40. #TheFinalBreakaway pic.twitter.com/TYKvyuoy7X

As for whether they’d repeat the trip, he wasn’t so sure.

“We don’t regret this adventure, but won’t make any promises to repeat the effort. Tim and I really enjoyed ourselves. Yesterday evening we had dinner with Maxime Monfort and the day before Lars Bak had left a surprise at our hotel.

“We could enjoy nature along our route – something that’s not possible in a race. Physically we still feel fine, but we are also happy to have a holiday now. We were surprised by the support we got and the number of people that followed our adventure. Thank you to everybody.”