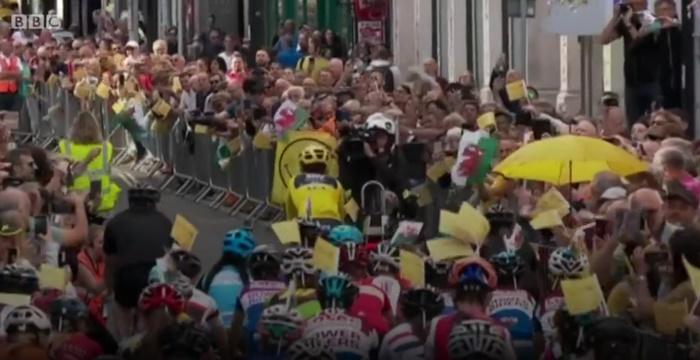 He was “worried that it might just be the wife and the dog,” but in the end thousands turned out to officially welcome home this year’s Tour de France winner, Geraint Thomas.

The BBC reports that around 8,000 people lined Cardiff's streets to celebrate his achievement.

"I'm used to racing in front of thousands of people but to walk out to this – this is bonkers," he said.

After being thanked by First Minister Carwyn Jones for "a stand-out moment in our sporting history," Thomas rode the streets of the city followed by a peloton of young riders, including a number from his old club, Maindy Flyers.

Back at the Maindy Centre, they’ve done this:

The celebrations climaxed outside Cardiff Castle, where Thomas posed for photos with the public (including a couple who’d just been married at the castle).

"You dream of winning races and crossing the line with your arms in the air but you never think about what happens after that,” Thomas told Wales Online.

“It's just bonkers. We were down at the Senedd and there were thousands of people there and I thought maybe this is where everyone has come and there's going to be no-one at the castle. But I was just blown away by it.

"Obviously, after Beijing we had something in Cardiff and after London we had a parade in London. But this is just – when it's all for just me – it's just hard to get your head around really."

Speaking about the prospect of competing at the World Championships in September, he said: "I'd still quite like to try and have some sort of form by the end of the year but I don't know about winning them.

"I think I'd have to be sort of Tour de France weight and form. I think it's easier to get the form. The weight now, it's a bit of a write-off to be honest after the last 10 days. It takes a lot of hard work, that's the hardest part for me.

"But I still want to, you know, from Monday try and commit to at least be in a decent enough shape to help the boys out.

"It's been one thing after the next at the moment. I haven't been in one country for more than two days at the minute, but I've still managed to have a few celebratory drinks along the way."

Thomas was this week offered a contract by CCC WorldTour – who have formed ahead of the 2019 racing season following a merger between CCC Sprandi Polkowice and BMC Racing – but it seems that he’s happy at Sky.

"We are incredibly close. I grew up in the system really – I've known them all since I've been 17. It works for me. I'm happy.

"But there is obviously a lot of good teams out there and out of respect I wanted to hear what they had to say.

"I've made my mind up in my head really, I just need to sort of get it done officially. Hopefully it will be done within the next day. It's been nice to have some nice offers obviously, but we'll see."

As for next year and the prospect of racing the Tour again, he said: "I think it's a conversation we'll have to have once the routes come out and go from there.

"I certainly want to do the Giro in the next couple of years, certainly if it comes to Cardiff or Wales but with the Giro I definitely feel like there's unfinished business there."

He added: "I've got a good three years in me for grand tours I believe and then after that why not go back and do the one days? It's all in your head.

"Chris Hoy, everyone says you lose speed when you get older, and he won an Olympic gold when he was 36. So if you've got the commitment and you keep putting the hard yards in that's the main thing."