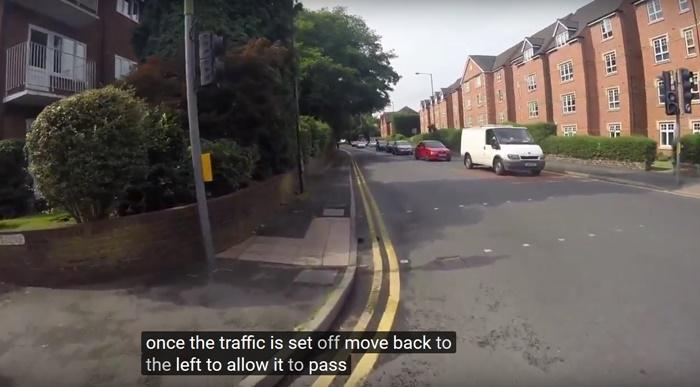 Avon and Somerset Police encouraged a close-passing motorist to complete an online course in which cyclists are repeatedly advised to move to the left to allow traffic to pass. Questioned on whether this was appropriate, an officer replied that, “we don’t seem to get many repeat vehicles coming back so it must be doing something.”

Back in June, Rob reported a close pass. He was told by police that the company’s fleet manager had been told the pass had been too close and the driver had been advised to take a look at the online Cycle Smarter course to get a cyclist's perspective.

(Somewhat bizarrely, this kind of makes it sound like the vehicle is the one being held responsible with the possibility of prosecution floated should it transgress again regardless of who was driving.)

Rob was also sent a link to the Cycle Smarter course. He says he believes it was originally set up to help people cycle, “but it fails even at that.”

As a tool for educating close passing drivers, the course features several questionable elements, as documented in this Twitter thread by Adam.

The visibility video advises cyclists to “be as visible as possible to cut risk of being hit by someone who isn’t focusing fully on their driving.”

The road skills video tells cyclists not to ride in the middle of the road, “or you’ll just be blocking traffic,”  and there’s also a suggestion that having a mirror on your helmet, “might just save your life.”

A second road skills video addresses traffic lights and instructs cyclists: “Once the traffic has set off, move back to the left to allow it to pass.”

Rob wrote to Avon and Somerset Police questioning whether the course was appropriate for close-passing drivers, and was told: “This is the first step and we don’t seem to get many repeat vehicles coming back so it must be doing something.”

The officer added: “This unit is not all about prosecution as I do not think that is the right way to go because it will change nothing. Most people do not read the Highway Code from the day they pass their test so even if this refreshes any road craft it will always be a help. From feedback from drivers who have had a warning letter most do not even realise they have passed that close to a cyclist etc, so this is about education and learning.”

They also said that the dash camera page was new to Avon and Somerset Constabulary and that processes were still evolving.