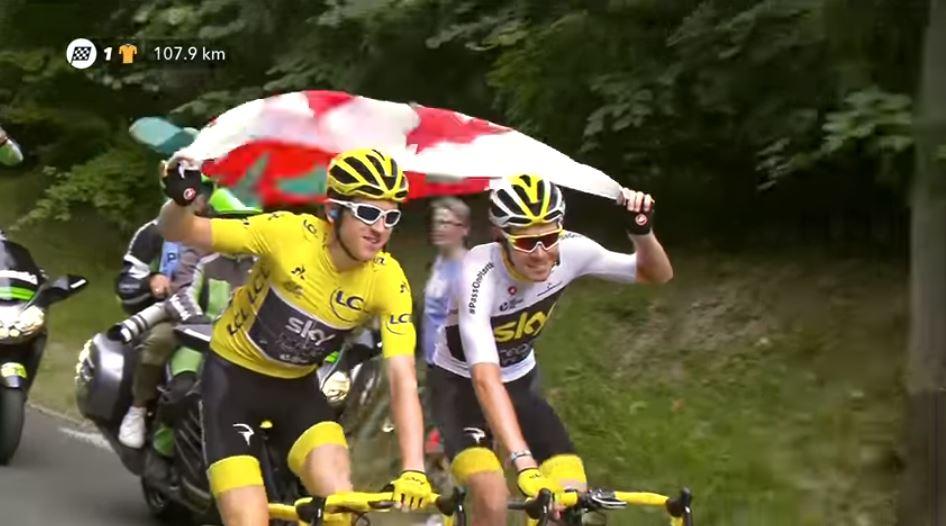 Geraint Thomas and Luke Rowe with the Welsh flag.JPG

Geraint Thomas of Team Sky has won the Tour de France, the first Welshman and only the third Briton to do so, with today’s 21st and concluding stage won in Paris by Alexander Kristoff of UAE Team Emirates.

Thomas safely negotiated today’s 116 kilometre stage from Houilles to Paris to cross the finish line on the Champs-Elysees in yellow and give Team Sky its sixth victory in seven years as it continues its domination of the race.

At the start of the stage, the 32-year-old lined up in the front row alongside the other jersey winners – Peter Sagan of Bora Hansgrohe, taking a record-equalling sixth points jersey, mountains classification winner Julian Alaphilippe of Quick Step Floors and best young rider Pierre Latour of AG2R-La Mondiale.

Also alongside them were Dan Martin of UAE Team Emirates, winner of the super combativity award and Direct Energie’s Sylvain Chavanel, riding his 18th and final edition of the race.

The early part of the stage was ridden at a sedate pace, with the usual photocalls, glasses of Champagne and a Welsh flag celebration involving Thomas and his Team Sky – and boyhood Maindy Flyers – team mate, Luke Rowe.

On the first crossing of the finish line on Champs-Elysees, with Chavanel given the honour of leading the race ahead of the first of eight laps of the closing circuit in recognition of his record number of participations.

Behind, Team Sky were at the front of the peloton, but before long racing began in earnest as six riders formed an escape group, including Taylor Phinny of EF Education First-Drapac, sporting a black eye after fracturing his right eye socket and his nose in a crash on Friday’s Stage 19.

Also in the break were David Gaudu, Silvan Dillier, Guillaume Van Keirsbulck and Michael Schar and Nils Politt, the latter the last of the group to be swept up on the final lap ahead of the final sprint.