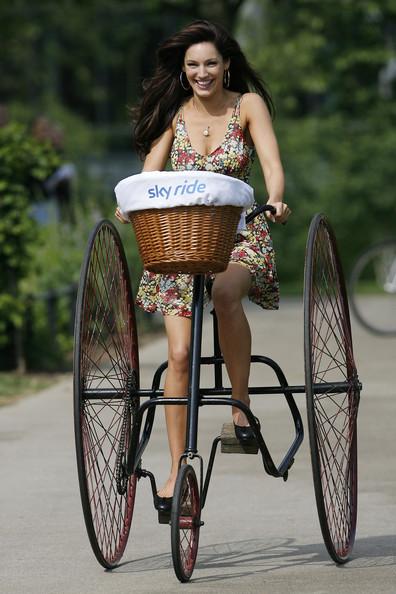 Have you seen this bike? Thieves clear out Leicester cycling charity

Cyclemagic broken into at the weekend; £10K worth of property taken
by Martin Thomas

Thieves have broken into a Leicester cycling charity and stolen £10,000 worth of property – including a Victorian tricycle used by Kelly Brook at the launch of this year's Sky Ride in London.

The burglary happened on Sunday night after thieves smashed down a door to get into the Cyclemagic offices in a 1930s factory building in the centre of Leicester.

As well as the tricycle, thousands of pounds worth of modern bikes and computer equipment were taken, including a laptop with the first draft of a book on early cycling history being written by Cyclemagic director and co-founder, Roger Lovell.

Roger said, “We’re still discovering stuff that’s gone missing – but it’s not just what they’ve taken that’s distressing. They left a right mess behind – letting off fire extinguishers all over the place and slashing the seats of my vintage motorbikes when they realised they couldn’t get them out of the building.”

According to Roger, the police will be arresting two people today – and possibly a third – and some of the stolen bikes may have been recovered. Another heartening development is the support there’s been from the cycling fraternity. Roger said, “There’s been a massive response. We’ve been on the TV news and in the local papers and we’re getting lots of messages of support. People have offered to travel miles to help us clear up and that’s made a real difference. It’s typical of the cycling world isn’t it?”

One curious aspect of the burglary is that it’s not the first that Roger’s heard of in which vintage bikes were taken. He said, “There have been a few other cases where vintage bikes have been targeted – but they never seem to reappear. They’d be impossible to sell on anywhere in Europe.

"The only reason I can think of for this is that they’re being stolen to order for private collections in the same way that art is sometimes stolen. It seems strange because the whole point of a bike is to ride it – which they could never do in public.”