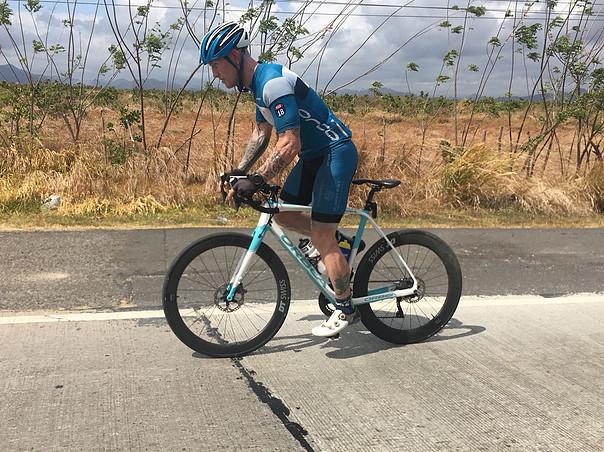 A British cyclist who had planned on riding the length of the Americas in 110 days to set a new Guinness World Record ended up completing the 14,000-mile journey in just under 100 days after learning that he and his wife had been invited to next Saturday’s royal wedding, revealing that he would have missed the event had he stuck to his original schedule.

Former Special Boat Squadron member Dean Stott, a friend of Prince Harry’s, shattered the existing record by 17 days as he finished riding the Pan American Highway in 99 days 12 hours and 56 minutes, meaning he can be back in Windsor for next Saturday’s nuptials.

The 41-year-old, who first met the Prince in 2007 when they were both on a six-week military training course, had just completed the South American leg of the journey from Argentina to Alaska when his wife told him they had been invited to the wedding, reports the London Evening Standard.

Speaking yesterday evening from Alaska, where he completed his record-breaking fully-supported journey on Saturday morning, he said: "When I originally set out on the campaign the world record was 117 days and five hours, my aim was to do it in 110 days.

"I did the South America phase and took 10 days off that world record, so I knew I was in a good position.

"Then the day after I got into America, my wife rang me to tell me we were being invited to the royal wedding.

"If I originally went for 110 days it would have been on day 107, so I literally had to give up my rest days and start pushing out some big miles – that was another incentive.

"I was quite comfortable knowing I had broken the world record, but it was just like 'right, now you need to get to the wedding'."

The Aberdonian, who left the military after a parachuting accident caused a knee injury, has so far raised more than half a million pounds for the mental health charity Heads Together, set up by Prince Harry and his brother, the Duke of Cambridge.

Prince Harry had encouraged him to use the ride to raise money for the charity, which aims to raise awareness of mental health issues as well as underlining the positive role that physical exercise can play in mental well-being, and helped him in his fundraising efforts.

Mr Stott, who suffered from mental heath issues after leaving the armed forces, hopes the total raised will reach seven figures following a charity ball in the summer where the gear he used on his record-breaking attempt will be auctioned.

He said: "For me, when I had my injury, I was in quite a dark place, I was snappy and moody, but when I then got into cycling I found an activity and the link that physical activity helps your mental state.

"Myself and Harry do stuff with other military charities, so when I told him about what I was doing, this was in April 2016 when Heads Together was in its infancy, he said would I mind doing it for this campaign and I said, 'No, it's the perfect fit'.

"Him and I have been messaging along the way, I've been informing him whenever I'm in a new country so he's been informed of my progress and obviously I messaged him yesterday with the final photos and he was over the moon," he added.

Mr Stott, whose fundraising will also help several other charities listed on his Virgin Money Giving page, said his priority now is get his outfit sorted ahead of Saturday.

"We land on Thursday in time for the wedding,” he explained. “I won't even have a chance to go home to Aberdeen – I'll have to get my morning suit tailored because I've lost about 10 kilos."