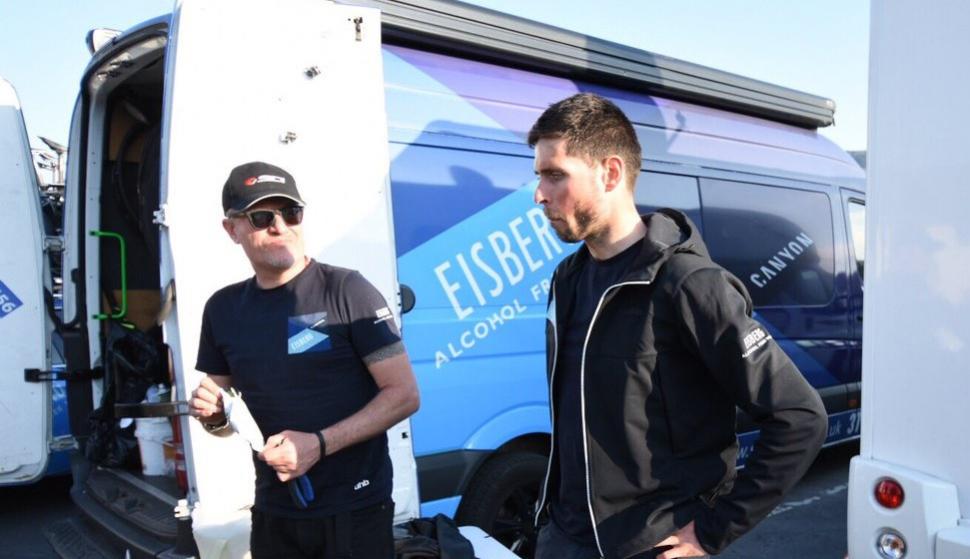 Somehow emerges with only cuts and bruises
by Alex Bowden

The team reports that Tanfield and Andrew Tennant managed to swerve the incident and later rejoined the peloton.

Paton somehow managed to emerge with only cuts and bruises, despite the fact he had been travelling at about 50km/h when the incident took place.

Good news is that Alex Paton is back on his feet after a nasty collision with a car that had been let back onto the course pic.twitter.com/40wj4GKPA4

“I’m obviously a bit sore, he said afterwards. “I’m now genuinely able to use the term I feel like I’ve been hit by a car. I know I’m a lucky man. Considering the sort of crash, I have done pretty well to be relatively okay.

“We were going down a sweeping right-hand descent, mid-corner and then suddenly there was a car driving towards us. I tried to go on the inside, between the barriers and the car, but didn’t quite get there and clipped the front.

“The car was in a bad way. I caught the corner of the bumper, wing mirror and down the side of the door. The poor guy will have quite a bit of work to do. But the important thing is Harry made it back in and so did Tennant. Unfortunately, I didn’t.”

Speaking about his own injuries, he said: “I rolled along quite well, which is probably the thing that saves you really. Otherwise you end up with major cuts. My left hip is the worst. It’s not awful but okay. It is the impact which will take some time to heal.”

There was also a bit of unwanted drama at the head of the race, where Cycling News reports the four breakaway riders were briefly led off route by the leading car.

They managed to avoid the queue of parked cars waiting for the race to pass, but by the time they had gone back, they’d lost 30 seconds of their advantage.

The ASO press office said: "There was a big crowd at the side of the road, and the arrows were not very visible. Moreover, the marshal with the flag at this point did not have a very clear sign. As a result, the first motorbike took the wrong direction. Then the lead car and the riders just behind."

Four kilometres later, three of the riders turned left at a tight right-hand bend and were again forced to backtrack.

Stage 1 of the women’s race on Friday had also seen a number of riders take a wrong turn at a crucial moment. The Guardian reports that several frontrunners followed a motorbike when it turned left into the race vehicle diversion instead of going right at the final roundabout with 800m to go.