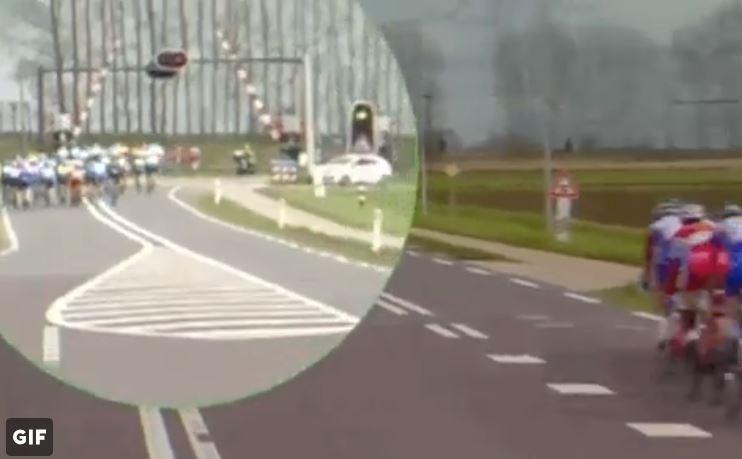 Video: Riders disqualified at Scheldeprijs - for going through level crossing

Demare and Groenewegen among those kicked out of action-packed edition of sprinters' Classic...
by Simon_MacMichael

More than a dozen riders were disqualified from Belgium’s Scheldeprijs one-day race today for illegally going through a level crossing as the gates closed.

The riders expelled from the race included some such as Groupama-FDJ’s Arnaud Demare and Dylan Groenewegen of LottoNL-Jumbo who would have fancied their chances in a race that favours the sprinters.

Also disqualified as a result of the incident were Katusha-Alpecin’s Tony Martin, the Team Sky pairing of Christian Knees and Ian Stannard, and Aqua Blue Sport rider Conor Dunne, among others.

They had been riding in the second peloton after echelons split the race apart, and fell foul of UCI rules that were tightened up in 2015 after a number of riders at that year’s Paris-Roubaix ignored warnings and went through a level crossing just as a high-speed TGV train approached.

As blogger Inner Ring points out, they may face further sanctions – including a potential one-month suspension – due to new rules introduced by the UCI this year.

As well as being disqualified today, the riders risk a fine and up to one month's suspension under a rule revision for 2018 pic.twitter.com/s6mBPAGTDr

An incident-packed race today also saw a number of riders abandon after they were involved in a collision with a car that was apparently parked on the course.

ugly, ugly crash in #Scheldeprijs... looks like they hit the back of a parked car? pic.twitter.com/593WIXqLrR

The race was won in a sprint from a much-reduced bunch by Dutch rider Fabio Jakobsen of Quick Step Floors, with the team’s former rider Marcel Kittel, now with Katusha and looking for his sixth victory here in the past seven editions, out of contention due to a late mechanical problem.