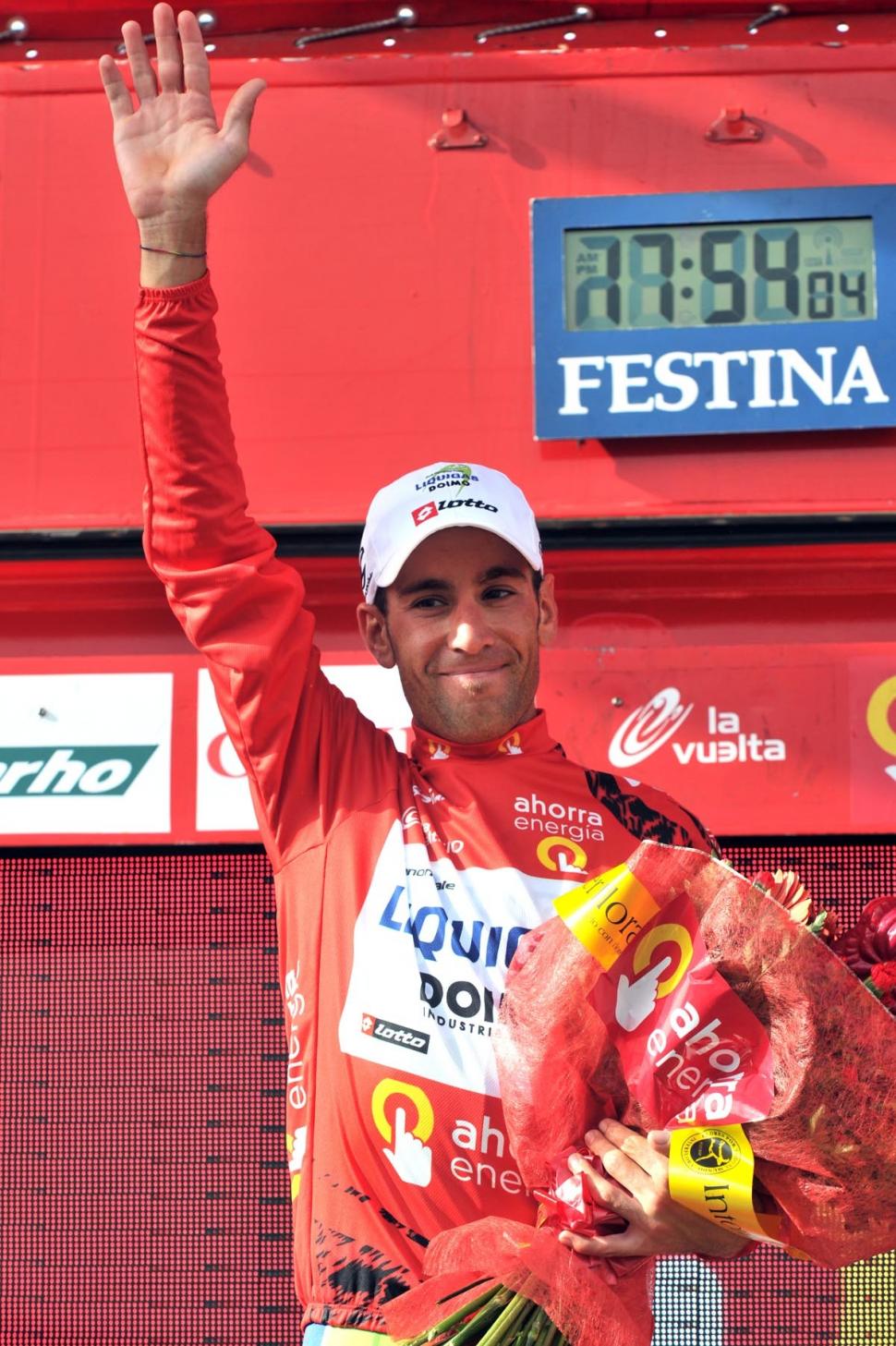 After as dramatic an individual time trial as has been seen in recent grand tours, Vincenzo Nibali of Liquigas-Doimo rode back into the 2010 Vuelta a España race leader’s red jersey today despite puncturing early on. Meanwhile previous leader, Katusha’s Joaquin Rodriguez, suffered a disastrous day that saw his dreams of topping the podium in Madrid on Sunday crumble, and Peter Velits of HTC-Columbia put in the ride of his life to leap to third overall.

Rodriguez (pictured below) wasn’t alone in having the opinion that the 33-second lead he carved out on Monday when taking the red jersey from Nibali on the ascent of the Cotobello was unlikely to survive this afternoon’s 46-kilometre Stage 17 individual time trial in Peñafiel.

However, few imagined that by the end of the day he would have been left with only an outside hope of even the lowest step on the podium come the end of the race, with only Saturday’s Stage 20 ascent of the Bola del Mundo outside Madrid now likely to affect the GC, the other three remaining stages being almost certain to end in bunch sprints. After today’s stage, the Katusha rider claimed that the cumulative effect of the efforts of the past two and a half weeks had taken their toll on him, but insisted his race wasn’t over just yet, saying: “Nibali has had a great time trial and I’ve paid the fatigue of the whole Vuelta but I haven’t said my last word. On Saturday, I want to win at Bola del Mundo and move back to the podium.”

Were it just Frank Schleck, one second in front of him, that Rodriguez needed to overhaul to get back on the podium, that might be a realistic prospect. But with Peter Velits putting in a phenomenal ride, the young Slovak rider now lies third, exactly one and three quarter minutes ahead of the Catalan.

Morevover, with sixth-placed Xavier Tondo on the same time as Rodriguez and Tom Danielson, Nicolas Roche and Carlos Sastre all within half a minute of him, even fifth position is now far from guaranteed.

Instead, it is now Xacobeo-Galicia’s Ezequiel Mosquera who carries the hopes of Spanish fans as the youngest of the three grand tours celebrates its 75th birthday. The highest placed finisher from last year’s race competing 12 months on, Mosquera is 39 seconds behind Nibali, with Velits exactly two minutes adrift of the Liquigas-Doimo rider.

Nibali himself acknowledges that Mosquera is the biggest danger to him capping a remarkable year, in which he finished third in the Giro d’Italia after an eleventh-hour call-up to the Liquigas-Doimo squad.

“Now my main rival is Mosquera,” he insisted. “I expected Rodriguez to lose up to three minutes but not 4.18! The more he was moving forward, the more time he was losing. The Vuelta is not over. It’s a very nice Vuelta. It’ll be contested till the end. On Saturday I’ll try to control the race the same way I’ve done it to the Lagos de Covadonga. I’ll keep team mates next to me as long as possible with Oliver Zaugg and Roman Kreuziger on the climb. I’ll be looking closely at Mosquera only.”

Time bonuses on offer to the first three finishers on Sunday, plus the fact that he faded in the final two kilometres of Monday’s stage, mean that Nibali has little room for complacency, but he could have finished today with a much bigger advantage over Mosquera had he not punctured.

“I tried to handle this time trial as well as I could,” explained Nibali. “Since the first part was very difficult with the wind, it was important to start strongly. In the first ten kilometres I was gaining 25 seconds on my rivals, and I puncture because a small gravel on the white painting, so I’ve lost these 25 seconds. I thought I was going to change bike but the mechanic was already there with a front wheel to change, so there were maybe two seconds of hesitation but I’ve gone back into my rhythm quickly. I’ve put my head down and ‘via!’ [go!].”

Fabian Cancellara, who put in the third best time of the day, set the early pace, but as Team Saxo Bank directeur sportif Brad McGee pointed out, despite the World and Olympic Champion being “as good as I’ve seen him before,” the effect of a shifting wind meant that the quickest man on the day was not necessarily the one who set the fastest time. “He has done a perfect race but the wind was blowing at 52km/h for him and at 60km/h for Fränk Schleck on the same way back,” added McGee.

The first rider to beat Cancellara’s time was Denis Menchov, who has had a frustrating Vuelta to date, but bettered Cancellara’s time by 25 seconds. Afterwards, the Rabobank rider (below) exclaimed, “This is cycling I guess!” Menchov continued: "I’ve done a very good time trial but someone has done a better one than me. I have no regret because I didn’t make any mistake and the wind was the same for Peter Velits and me. I wanted to do it flat out. I had said that after losing too much time on GC that I wanted to try three stages: two in the mountains and the time trial. There’s one more mountain stage and my season will be over on Sunday. I’m second today, so I’m not finishing on a bad note, whatever happens on Saturday,” added the Russian.

Velits, meanwhile, whose twin brother Martin is also riding for HTC-Columbia in the race, could hardly believe his victory afterwards: “This is my first time trial victory,” he revealed.

“It’s unbelievable that it happens at the Tour of Spain. I can’t describe it. To beat Cancellara who is the absolute top TT rider makes it even more of a surprise. On the way out, I didn’t give 100% but on the way back, I put the hammer down. I saw Danielson in front of me. He was coming closer and closer. It was such a big motivation.”

Looking ahead to Saturday’s battle, the 25-year-old Slovak (pictured below) said: ‘I’ll try to keep my spot on the podium as hard as I can. There’s one more climbing stage. I’ll do everything I can. I’m already very happy with the victory I got. It’s possible that I’d be fighting for the overall victory if I didn’t lose time in Cotobello (stage 16) but every day at the Vuelta, I’ve given my best.” 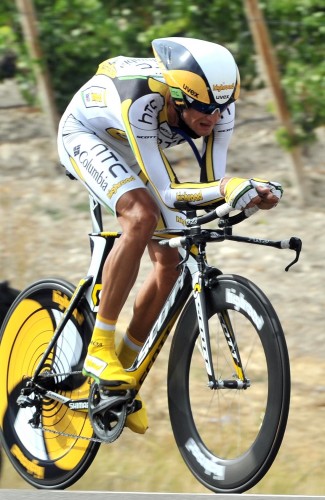 One rider who will wish to forget today’s time trial, however, is Theo Bos of Cervelo TestTeam, who crashed out of the race in unusual circumstances, as directeur sportif Philippe Mauduit explained. “What happened to Theo is unbelievable,” Mauduit said. “

I saw him approaching the motorbike of a photographer that was well parked on the right side of the road and I thought he was going to profit from the protection from the wind but he was head down, he didn’t see the obstacle and he went straight to it. It’s been violent. He’s gone to hospital but fortunately, nothing is broken.”

Tomorrow’s 153-kilometre stage from Valladolid to Salamanca, like Friday’s stage into Toledo and Sunday’s finale in Madrid, is expected to finish in a bunch sprint as Tyler Farrar of Garmin-Transitions and Mark Cavendish, the current wearer of the green jersey, fight it out for the points classification.

Cavendish, who briefly wore the race leader’s red jersey after being the first HTC-Columbia rider over the line in the opening team time trial in Seville nearly three weeks ago, has the upper hand, with a 21-point advantage over Farrar. The American actually lies third, three points behind Joaquin Rodriguez, but the Katusha rider won’t be contesting sprints, and has accumulated his points on mountain stages.

The Manx Missile, who despite 15 Tour de France stage victories and five in the Giro d’Italia has yet to win a points classification in a grand tour, is clearly relishing the prospect of getting back to what he does best after several days out of the limelight as the 65th edition of the Vuelta made its way through the Cantabrian mountains followed by today’s race against the clock.

“My butt hurts after this time trial! This is not the kind of effort I’m used to but it looks good for tomorrow,” he said. “We’ll be back in a sprinting day, I hope.”