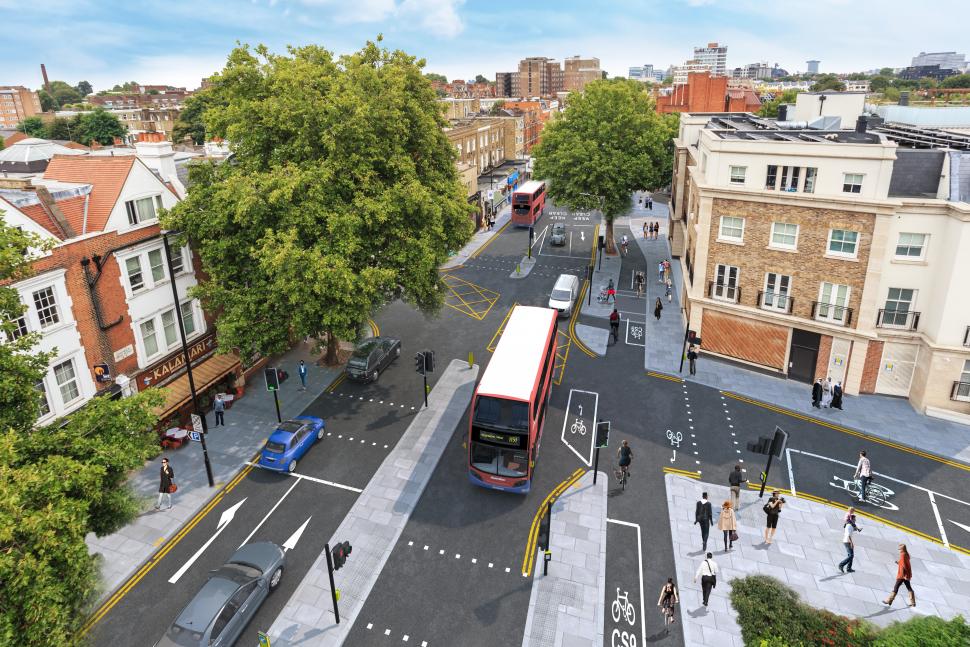 A consultation into a proposed Cycle Superhighway in west London has generated more than 5,000 responses, with people in favour outnumbering opponents by three to two. The proposals received support from major local employers including Sky UK and Glaxo-SmithKline, while some bizarre grounds were raised in objection.

The route, CS9, is scheduled to run from Kensington Olympia to Brentford, with a later extension planned westwards to Hounslow, with Transport for London (TfL) publishing a report today into a consultation held late last year.

Part of the route passes along Chiswick High Road, where there has been vociferous opposition to the project from some local businesses and residents, as well as Conservative councillors.

Unsurprisingly, that section of the route generated a higher level of responses than any other section under consultation.

But even there 59 per cent of respondents supported the plans, with 43 per cent showing strong support, against 38 per cent who opposed them, 33 per cent strongly.

“Cycle Superhighway 9 will improve safety for cyclists and make the area more attractive for pedestrians, providing real benefits to the whole community.

“I look forward to working closely with the borough councils to consider all of the responses and develop our plans further,” he added.

Among businesses supporting the route were Brentford-based GlaxoSmithKline, which called for it to be extended westwards to Heathrow Airport – an appeal also made by the airport itself – and at the eastern end to Hyde Park, where it would link with the existing East-West Cycle Superhighway.

That would require a change in attitude from the Royal Borough of Kensington and Chelsea, however, which has so far resisted calls to allow segregated infrastructure for cyclists to run along Kensington High Street.

The broadcaster Sky UK, which is based in Osterley, also called for the route to run from Hyde Park to Heathrow and said it would encourage visitors and more of its staff to cycle, since it would give them somewhere safe to ride.

Among businesses opposed to the proposals were two that operate buses on behalf of TfL.

One, RATP Dev London – owned by the Parisian equivalent of TfL – said that “as cyclists love using bus lanes, a bus lane should be built from Olympia to Hounslow instead, and suggested this would keep the majority of people happy,” according to the consultation report.

The other, Red Routemaster, “claimed that Cycle Superhighways were the sole cause of slower motor traffic journeys in London, and have increased costs for fuel and driver hours,” the report said.

“They objected to schemes that benefit minority road users and claimed encouraging cycling would increase collisions.”

Much of the local opposition in Chiswick was focused on the perceived threat the two-way cycle lane would pose to the character of the high street, accompanied by claims that it would also endanger pedestrians.

They are likely to seize on certain comments contained in today’s press release from TfL as a sign that they may yet be able to have the route detoured, or at least have the proposals watered down in some way.

Ben Plowden, director of project and programme sponsorship at TfL, said: “We have to make sure that this new infrastructure works for the community and that’s why we are taking the time to fully analyse this detailed feedback.”

A trio of Tory councillors from the Turnham Green ward came up with an objection that does not seem to have been aired before in connection with planned cycling infrastructure.

They said it would “increase local crime (cycles used for snatch thefts and for planned heists from high-value retailers such as jewellers)” – although in the past couple of years it has been scooters and mopeds that have become the vehicle of choice for criminals in the capital looking to grab mobile phones from unwary users.

TfL says that it is now analysing all the responses and that it will publish its proposed action later yhis year.

“This new route will be the first of its kind in west London, creating much-needed protected space for cycling, making it much safer and enjoyable for many more people to cycle their everyday journeys in and through the area.”