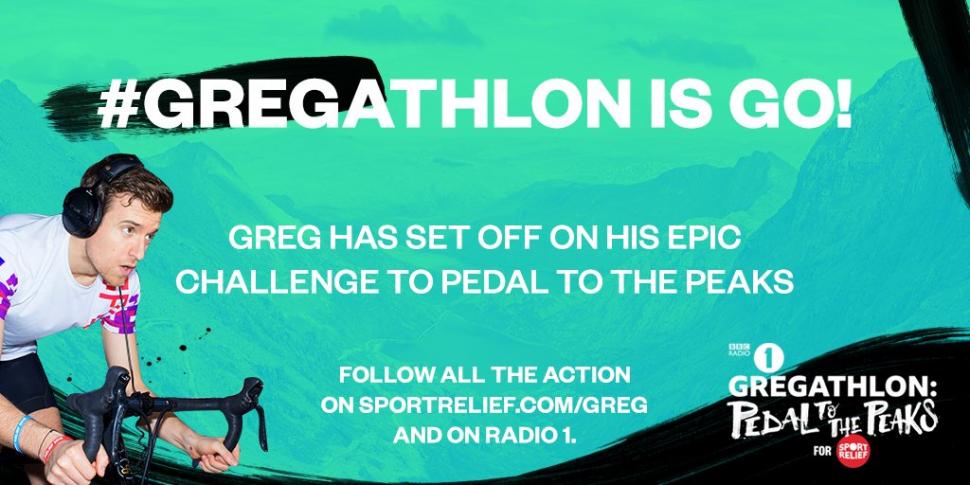 James's Pedal to the Peaks started today, while Ball will ride from Blackpool to Brighton next week...
by Simon_MacMichael

Greg James and fellow BBC Radio DJ and TV personality Zoe Ball are getting in the saddle for this year’s Sport Relief, each undertaking a five-day challenge that will involve hundreds of miles of cycling.

Given the weather forecast, it’s a safe bet that if you were planning to climb the highest peaks in Wales, England and Scotland, this wouldn’t be the week you’d choose.

But that’s the challenge that James, aged 32, is undertaking this week and after setting off this morning he had already scaled Mount Snowdon by lunchtime.

And... he's OFF! @BBCR1's @gregjames is attempting to head up Snowdon on the first stage of his #Gregathlon for #SportRelief.

To support him and find out more, head this way: https://t.co/DuAX8mhH7r pic.twitter.com/2ZEVOOodK8

From there, he had an 80-mile bike ride awaiting him before an overnight stop at Daresbury in Cheshire.

The challenge, billed Gregathlon: Pedal to the Peaks continues tomorrow with James riding on to Nether Wasdale in Cumbria ahead of climbing Scafell Pike on Wednesday and then cycling for an overnight stop at Abington, South Lanarkshire.

Thursday will see him continue his bike ride – across the week, he will spend 500 miles in the saddle – to reach Fort William for another overnight stop before tackling the United Kingdom’s highest peak, Ben Nevis, on Friday.

Two years ago, James raised more than £1 million for Sport Relief through the ‘Gregathlon’ which saw him complete a triathlon for five days in succession in different British cities, hosting his radio show in each one afterwards.

Ball, aged 47, will be riding 350 miles over five days from her birthplace, Blackpool, to the town where she lives, Brighton.

The Zoe’s Hardest Road Home challenge will see her ride to Widnes on the opening day, Monday 5 March, followed by overnight stops in Stafford, Stratford-Upon-Avon and Marlow.

She is riding to raise awareness of mental health, in memory of her boyfriend Billy Yates, who committed suicide in May last year after struggling with depression.

“I lost someone very dear to me who really struggled with depression.

“It was really important that I did something. Thinking of the reason I signed up for this challenging adventure will spur me on.

“Knowing that every penny we raise will make such a difference to so many different people’s lives is a great feeling.

“I hope that my endeavours inspire others to do something that moves them for Sport Relief, too,” she added.

Back in 2010, a team of celebrities led by David Walliams – accompanied by Fearne Cotton, Davina McCall, Miranda Hart, Patrick Kielty, Jimmy Carr and Russell Howard – rode from John O’Groats to Land’s End in less than 82 hours, raising a seven-figure sum for Sport Relief.

1
“Absolutely vile” – Cyclist slams Staffordshire Police after it tells him no prosecution of drivers based on video footage if no injury or damage involved
2
"We know who you are" – poster addressed to bike thief gets bike returned to owner
3
Fake cop stops cyclist and demands to see his ‘licence’ to ride in bike lane
4
Five cool things coming soon from Scott, Pro, Spatzwear, Scribe and BZ Optics
5
‘Dominatrix’ whipped cyclists at World Naked Bike Ride in New Orleans
6
Nine-year-old boy sustains neck injury after cycling into rope stretched across path
7
Shimano’s Pro launches Stealth Curved saddle for riders who tend to shift left-to-right
8
Government to roll out Mini Holland schemes beyond London