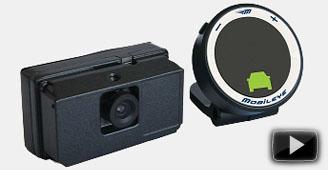 The solution to SMIDSY collisions? + video

Somehow we doubt it
by Mark Appleton

An end to SMIDSY - and all other - motoring collisions is on the horizon according to the company behind an electronic “third eye” for the automotive aftermarket.

It’s a bold claim which, frankly, is hard to justify based on the evidence we’ve seen, but one that is nonetheless being made by the makers of the Mobileye C2-270 device.

Due to go on sale later this year, the gadget sits on a vehicle’s dashboard and employs a camera linked to a “brain” which can recognise pedestrians, cyclists and other vehicles. It is essentially a development of existing technology incorporated into some cars which gives a warning when drivers get too close to the vehicle in front.

With the C2-270, vulnerable road users displaying lemming-like tendencies trigger an audible and visual warning which is supposed to alert the driver thereby ensuring they take the appropriate evasive action. We would contend that any system that relies on a human being to react correctly when prompted is in no position to claim: “an end to motor vehicle collisions now in sight”.

And the video demonstration is hardly convincing: a female cyclist apparently en route to a ballroom dancing session makes a frankly suicidal manoeuvre the Mobileye beeps and  the driver slams on the brakes… now if the Mobileye slammed on the brakes that would be more impressive.

The device may be helpful to those who habitually allow themselves to be distracted and who therefore probably should not be behind the wheel in the first place, but for drivers who pay attention to their speed and to what is going on around them, we would argue it is redundant.

Not so claims Isaac Litman, CEO of Mobileye Products. “Best of all, drivers can drive reassured with the feeling that an extra eye is constantly at work in the car, giving them another line of defense in an increasingly dangerous road environment”.

An alternative view is that this is the kind of gadget that could encourage drivers to “delegate” their responsibility to drive with due care and attention in the mistaken belief that the Mobileye C2-270 will always get them out of trouble.