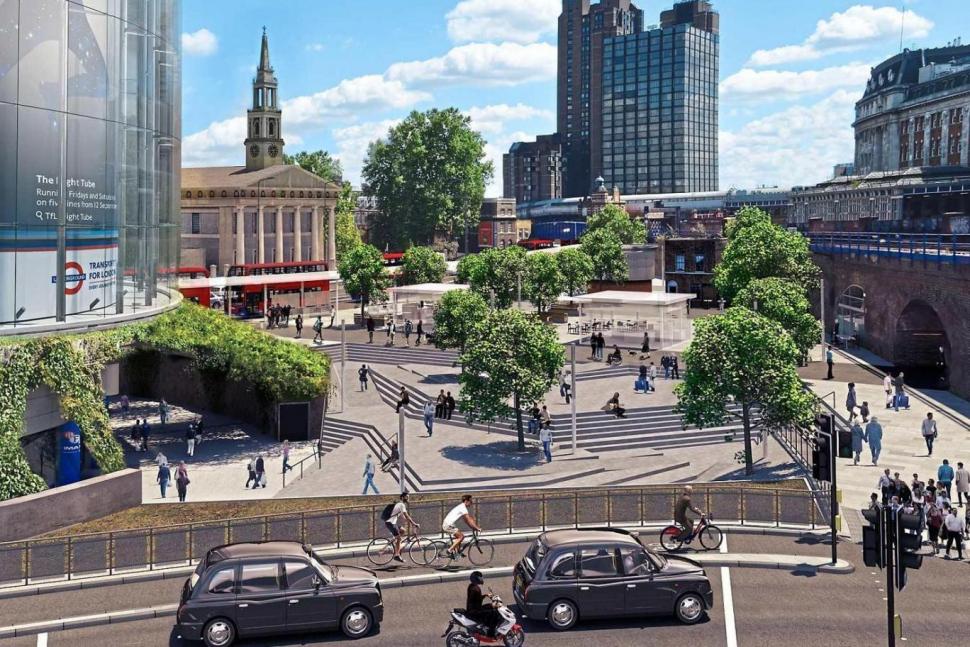 Overhaul of London's Waterloo roundabout gets go-ahead after consultation

55 per cent of respondents in favour of plans including protected cycle lanes but work won't start until 2020...
by Simon_MacMichael

Mayor of London Sadiq Khan and Lambeth Council have announced that work to transform Waterloo roundabout and the surrounding area to make it safer for cyclists and pedestrians will commence in early 2020.

The news comes as figures from Transport for London (TfL) show year-on-year growth in levels of cycling within the Congestion Charging Zone in the third quarter of this year (July-September), underlining the effect of safe infrastructure in encouraging people to cycle.

Confirmation the works at Waterloo will go ahead follows a public consultation held earlier this year in which some 55 per cent of the 1,628 respondents said that they either strongly agreed or agreed to the proposals.

> Plans unveiled to rip out three of London's most dangerous roundabouts

Under the plans, the roundabout surrounding the IMAX cinema at the southern end of Waterloo Bridge will be removed and turned into a new public space with TfL seeking to end the current domination of motor traffic in the area.

In a press release, TfL said: “Cycling will be made easier and more appealing through dedicated space and signals to reduce collisions, while tackling this notorious junction removes a barrier to cycling in the wider area.

“Both pedestrians and bus users will benefit from a new signalised crossing, a new public square and wider footways.”

With the corner of the roundabout nearest to Waterloo Station closed, the roundabout will be replaced by roads with two-way traffic flow, including protected cycle lanes.

Pedestrians will benefit from wider footways and better crossings, while the bus station close to the roundabout will also be improved. Waaterloo Imax roundabout before and after (source TfL)

London’s Walking and Cycling Commissioner, Will Norman, said: “Waterloo roundabout is currently one of the most dangerous junctions in London, so it’s great news that we can progress with our plans to improve it.

“We’re going to transform this intimidating junction, making it safer and more pleasant for all those who use the area.

“By creating people-friendly streets, we can encourage many more Londoners to walk, cycle and use public transport, improving our health and air quality.”

Councillor Matthew Bennett, who is Lambeth Cabinet Member for Planning, Regeneration & Jobs, said the changes would benefit people who live and work in the area, as well as those travelling through the junction, which is close to the attractions of the South Bank.

“We are determined in Lambeth to make our streets safer, cleaner and easier for everyone to get around, particularly those who walk or cycle, so we’re pleased to be working with TfL on such a major project, investing to improve the area around Waterloo roundabout and along Waterloo Road,” he said.

“We want the area to be a more attractive place for people to spend time in, use local businesses and enjoy everything that is on offer.

“I’m glad so many people took part in the consultation and I’m confident these plans will make Waterloo a much better, healthier and safer place to live, work, and visit for years to come,” he added.

“We are also committed to continuing to work with local residents in the area to reduce rat running and congestion in neighbouring residential roads.”