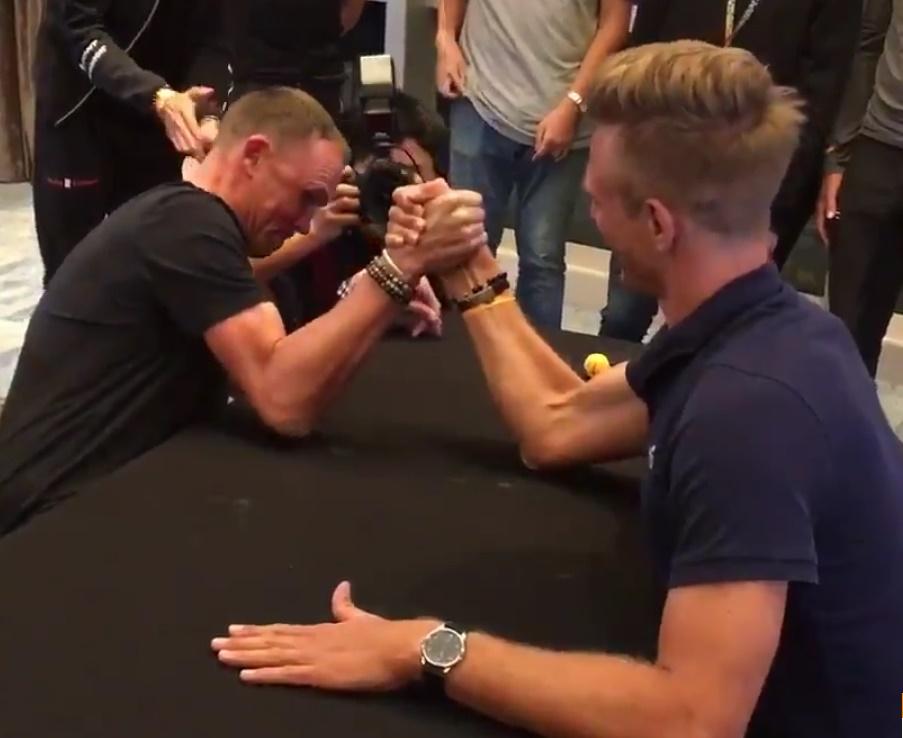 Arguably the main highlight from The Shanghai Criterium
by Alex Bowden

It’s the video you didn’t know you were waiting for: Marcel Kittel taking on Chris Froome in an arm wrestle.

The footage, from a press event, was posted by Tour de France organisers ASO ahead of their Shanghai Criterium.

Not sure this really counts as a spoiler, but Froome – a nine-time winner of the World’s Spindliest Arms Competition (disclaimer: not an actual thing) – is admirably whole-hearted in his efforts.

I let @marcelkittel have it... didn’t want to embarrass him #ShanghaiCriterium https://t.co/xpEGLr4d2B

We’d give Froome points for maintaining good humour throughout what was never going to be a glorious opportunity for him to showcase his physical prowess.

He had a fair stab at the on-stage Tai Chi too.

Froome did at least win the subsequent bike race after getting away as part of an almost-too-good-to-be-true break with Tour de France runner-up Rigoberto Uran; King of the Mountains winner Warren Barguil; and Alberto Contador, in what you could perhaps call his final race.

1
Could our Tour de France on Zwift April Fools joke become a reality?
2
We asked you how coronavirus had changed your cycling habits and the response was overwhelming – here’s what you told us
3
Full Kit Ranker round 1: Your chance to vote for the greatest cycling jersey of all time
4
Derbyshire Police criticised for suggesting 'lycra clad cycling' is currently unacceptable
5
Cyclists banned from Richmond Park due to “congestion”
6
Daily exercise rules: current cycling dos and don'ts
7
Warning that cycling could be banned if people don’t ride responsibly this weekend
8
“Absolutely amazing” say campaigners as Government quietly announces it will prioritise a shift away from cars