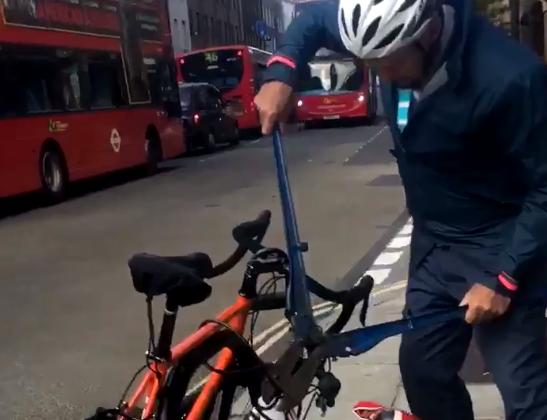 You can't say he knows nothing about getting out of an accidentally locked bike situation...
by Simon_MacMichael

In one of the more surprising videos we've seen this year, Channel 4 newscaster - and president of the charity, Cycling UK - Jon Snow has been filmed in central London taking a pair of bolt-croppers to a chain securing a parked bike.

Footage of the bizarre incident, which happened outside the ITN News building on Gray's Inn Road, was uploaded to Instagram and Twitter by Nick Constantinou.

Apparently, a youngster had inadvertently put a chain lock through the frame of Snow's bike while locking their own, as a Channel 4's head of communications, Hayley Barlow, explained to The Sun.

Jon had left the studio because he had an interview to get to but when he got to the bike rack, he discovered a child had chained both bikes together in error," she said.

"He managed to get access to some bolt-cutters and cut the chain. Jon then went to a local bike shop and bought a new chain.

"He used that on the child's bike to chain it to the railings and put a note on it saying the key had been left in a safe place with instructions on where to find it.

"Jon even managed to make it to his interview on time."

A word of warning.

If you do come back to your bike and find that someone else has locked their bike close to it in such a way that your one has been locked too, be aware that it is a tactic often used by bike thieves.

Working on the assumption that the bike's owner will leave it overnight in the hope that the other bike will be gone by the morning, that gives them ample time to go about stealing your bike when the streets are quieter.